Vineet Jain is coming into his own. He’s taking the Old Lady of Boribunder to places she’s never seen before. 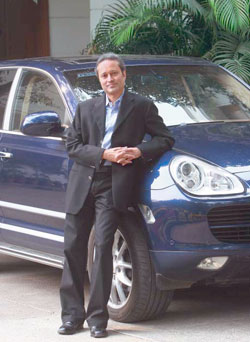 Vineet Jain
After waiting for him briefly on a clear December morning at his Motilal Nehru Road house in New Delhi’s rarefied Lutyen’s zone, Vineet Jain, slim and dapper, walks in wearing a sharp black suit. It’s taken weeks for this meeting to happen and it hasn’t been easy to finally get a spare 30 minutes with Jain, who may not be as legendarily reclusive as his older brother Samir but yet maintains a studied low profile.

Jain, 41, is Managing Director of Bennett Coleman & Company Ltd., also known as the Times Group, Indian media’s 800-pound gorilla—one which simultaneously inspires awe and admiration as well as fear and hate. Jain is pleased with his entertainment TV channel Zoom’s ad in this morning’s Times of India, claiming that it is ahead of everyone else in its genre.

“Zoom and (24-hour English news channel) Times Now are making it; our news channel is ahead of NDTV 24x7,” he declares. And then, abruptly steers the conversation towards something different. “But you must mention my brother, Mr Samir Jain, he’s the reason why our ventures have been so successful—whether it be the Mastermind (the group’s innovative rate card for ad space across its print publications), invitation pricing for our newspapers or any other strategy,” says Jain.

It’s not surprising that group Vice Chairman (and the chief driving force behind the Times Group) Samir Jain’s name comes up so quickly in our session. Ask anyone in the industry about Vineet and their response almost always veers to the achievements of older brother Samir, who, at 53, is universally acknowledged as the main architect of the group since the early 1980s, growing it from a big player to one that is, quite possibly, larger than many of its rivals put together.

Closely held and unlisted, BCCL’s turnover is estimated at over Rs 4,000 crore and profits to the tune of Rs 1,000 crore, a measure of the success with which the elder Jain has steered the group. Some analysts reckon that if BCCL were to list, it could have a market value of Rs 40,000 crore, making it the most valuable media group in the country. Even if the group were to sell only a 10 per cent stake in itself, it could raise Rs 4,000 crore—enough moolah to smother competition.

Given Samir’s overwhelming vision and authority at the group, it’s easy and perhaps even tempting to overlook Vineet’s role in shaping the group’s strategy but the fact is in the two decades after he was inducted into the family business, the younger Jain has come a long way.

The group’s forays into television—with Zoom in 2004 and Times Now in 2006—and FM radio (with Radio Mirchi) are largely credited to Vineet as is its not-so-recent entry into the digital space with Times Internet. In fact, some insiders say that the elder Jain doesn’t really get too excited by either TV or the internet businesses. “I am involved in the operations of BCCL on the editorial side, with the editorial formula of the group. My brother (Samir) spearheads all the strategy, pricing—all the Ps of marketing.

You can call me the content architect,” he says. He talks about how BCCL launched Mumbai Mirror in 2005 to flank The Times of India when rivals like DNA and The Hindustan Times launched editions in its Mumbai home market. “My brother expressed the need for a second paper; he never gets into the details of the content and its direction, that’s for me to decide. I had to conceive what that second paper should be—whether it should be a broadsheet or a compact.”

Insiders at Times House, the group’s headquarters on Bahadur Shah Zafar Marg, talk about the almost magical partnership between the two brothers. “You cannot split the two brothers, the older one is the thinker, the fount of ideation and strategy; the younger one is all about action, the architect who has put the plans to work.

But Vineet is also the group’s nose; he’s led it into new areas,” says Vijay Jindal, Managing Director, SREI Venture Capital, and a former executive and veteran of many years at the Times Group. Another possible reason why the brothers work well together could be the age gap—Samir is 12 years older—between the two. “In the absence of their father, Ashok Jain (who died in 1999), Samir is almost like a father-figure to Vineet,” says one insider at Times House.

If the senior Jain is the visionary at Times Group, his younger brother is the doer, a details-oriented person with a flair for creative work. Another senior Times executive says while the older brother has an unmistakable demeanour and gait in his conversation, Vineet is very different. “In Samir, you obviously see a master craftsman speaking. Vineet does not fall into any conventional leadership mould that one can readily identify. He desists from authorship of any of his ideas,” he says.

As well as being much younger than his brother, Vineet, who is single and fun-loving, is more sociable than the elder Jain. His Holi party at his Delhi residence every year is a must-be-seen-at event and under his aegis, the Bombay Times party in Mumbai has become a red-letter event for anybody who is somebody in that city’s glam and fame circles.

Rajesh Sawhney, former Head of Indiatimes and now President, Reliance Entertainment, says Vineet brings a unique focus on youth demographics across all the media of the group, be it print, online, TV or radio.

Not surprisingly, several of the group’s young and new businesses have been initiated by Vineet. “Internet with Indiatimes, Bombay/Delhi Times, Radio Mirchi and our venture into television with Zoom and Times Now, movie production and out-of-home advertising are entirely my initiatives. My brother does not have any input on content or strategy in these areas,” Vineet admits matter-of-factly.

But in spite of some of these new diversifications, the group’s preponderance with the print media is quite evident—and justified perhaps given that print is estimated to bring as much as 90 per cent of the group’s total revenues. Some even wonder about the long-term sustainability of some of the non-print businesses, at least from the group’s point of view. Says Apurva Purohit, former COO of Zoom and now CEO of Music Broadcast (which owns Radio City FM stations): “I’m not too sure if the group has a clear, longterm view on their investment in television.” Media analysts dismiss the performance of Zoom even as they acknowledge that Times Now is finally in the reckoning.

In the four weeks ending December 15, Times Now was consistently ranked #1 with a channel share of 33.3 per cent among English news channels (as per TAM data in cable & satellite homes in the age group 25-plus, All India). Sure, there are many ways of splicing data, but “Times Now has gained share and is threatening the English News domain where NDTV 24x7 and CNN-IBN ruled, and Zoom TV is now gaining critical mass,” says Vikram Sakhuja, COO-South Asia, GroupM, one of the largest media investment groups that’s part of WPP.

While it may be premature to judge the group’s new Vineet-led ventures like TV, radio and internet, critics sometimes feel the group has been slow in leveraging synergies across its portfolio of businesses. Its print, TV, digital and other businesses aren’t adequately synergised, say some observers. “But,” retorts A.P. Parigi, a BCCL director and Managing Director, Entertainment Network India Ltd (ENIL), a subsidiary that runs the radio business: “Synergy is a misunderstood term. We have grown by building equity of each of our offerings.

The new forays have to first establish ground and merit…hook ups happen, there are certainly synergies in the way content is being leveraged.” How the new businesses shape up may be a metric by which the younger Jain could be judged but the bigger issue will probably be on how the group, a virtual media leviathan in India, deals with emerging trends in the media landscape. For one, although foreign investment in news media is restricted currently, most observers believe things could change in the near future. That’s when Times could find itself competing not with local minnows but with global whales like NewsCorp.

For its radio, TV, outdoor advertising and internetrelated businesses, the story is somewhat different. For one, in none of these is its position as comfortably secure as in print: TV and radio are crowded businesses and the internet space has already seen the aggressive entry of global giants. In many ways, for Indian media players, these are critical times and, going forward, many eyes will be on what the Times Group does in the coming years. And what it does will, to a large degree, depend on how one person, Vineet Jain, leads the group.
TweetYoutube