Vikram Akula has revolutionised Indian microfinance by building SKS—one of the biggest brands in rural India. His critics feel that he has ignored the very people he should be helping.

Vikram Akula
Consider a company growing at a sizzling 200 per cent and backed by blue chip venture capital investors from Silicon Valley—such as Sequoia Capital and uber VC Vinod Khosla. A firm that has recently raised $75 million (Rs 366 crore) in its fourth round of financing in one of the worst economic downturns in global history, posted consistent profits and in just a few years attracted a valuation of around $400 million (Rs 2,000 crore).

You might think that this is perhaps a classic tech start-up—a firm that has probably developed the next generation “killer app” in a niche industry segment and one that might just redefine the way we go about doing things.

Sort of. SKS isn’t a tech firm but one of India’s new breed of microfinance outfits. Yes, it does stand a good chance of redefining the way a good chunk of India’s population lives and its “killer app” is nothing but a shrewd business model that farms out millions of loans and other services to the poor, enhances their livelihoods and makes a tidy profit for its investors and senior management. Founded by Vikram Akula, a Ph.D in Political Science from that bastion of free markets—the University of Chicago—and an ex-McKinsey hand, SKS is firmly wedded to a for-profit model to tackle India’s crushing rural poverty.

Click here to Enlarge
SKS has posted some spectacular growth numbers. Since its founding in 1998, it has added 3.4 million members, disbursed close to $1 billion (Rs 5,000 crore) in loans, established a 13,221 employee base and covered over 50,000 villages in India. “We definitely represent a new generation of microfinance— one that is using a commercial approach to scale rapidly and is keen on not just credit but the full range of financial services for the poor,” says Akula.

Vijay Mahajan
However, while the firm is growing rapidly, gobbling up as many poor rural clients as possible by issuing them 5,000-rupees loans on average, some veterans in the industry have become trenchant critics of the manner of growth that SKS and its peers have adopted (see accompanying story Leveraging the Poor.) The company also faces significant operational challenges, especially in managing attrition rates amongst its ballooning workforce and ensuring that its IT backbone can keep up with the firm’s rapid expansion.

How exactly does SKS make all this money for its investors? The company has effectively melded the Grameen approach pioneered by Muhammad Yunus— the man who jump-started the microfinance industry by making small loans to groups of women—to a business model that keeps a firm eye on generating profits. This means seeking out and interacting with millions of individual rural poor, assessing their needs and brainstorming an entrepreneurial solution to their cash flow problems. The reason firms like SKS are so popular in rural India is because the countryside is starved of credit. Borrowing money means going to a local moneylender and seeking out a loan with an astronomically high interest rate—usually between 100-5,000 per cent. Click here to Enlarge
Consequently, the 24 per cent rate that SKS charges is small potatoes. However, the real magic behind SKS’s revenue and profit figures is its ability to lock in a loyal, growing client base to which it can sell all manner of products in the future. “If Bill Gates’ vision was a PC on every table, our vision is to get financial services on every doorstep in rural India,” says 40-year-old Founder & Chairman Vikram Akula. A consummate salesman of the SKS vision, Akula loves tech analogies. In addition to invoking Microsoft’s name a number of times in a conversation—not an ideal ploy considering the software company’s reputation as a ruthless monopolist— Akula also loves to compare SKS to Google in an effort to further tease out his business model. Just as Google has made a fortune by becoming the gateway to the top tier of the consumption pyramid (affluent online consumers), says Akula, SKS sees itself as the Google for the bottom tier, namely India’s rural poor. The firm sees itself as the last mile solution for anyone who wants to sell anything to this group—a massive market that companies in India are desperate to tap into. “We have the path to the pot of gold,” says Akula. “Everyone has approached us, from tractor makers to people selling colour TVs, water purifiers and diapers. We’re creating brand new markets.”

All of this is only possible if SKS manages to keep its human resources department efficiently humming along. Manpower is the lifeblood of SKS. The company is adding 3,00,000 new clients monthly, which means opening up 100 new branches a month as well—in addition to the several million customers that SKS needs to monitor and service. This is a gargantuan task, requiring an assembly line approach to recruitment, training and placement of personnel, not unlike the highly standardised distribution process of Coke or McDonald’s. Each loan officer that is recruited and trained, reports to a branch manager who in turn reports to a regional manager and so on. SKS has also recruited around 90 management graduates for senior positions who are all put through the same rigors as prospective loan officers and branch managers. For SKS to be able to be operationally efficient, it needs to manage its retention rates—currently 30 per cent amongst loan officers—and ensure that quality of staff doesn’t take a dip in its frantic efforts to scale up. Click here to Enlarge
When Akula enrolled in a Ph.D programme at the University of Chicago’s Political Science department in 1996, the college’s free market environs must have made a deep impact on him. It was here that he began to seriously examine how one could devise a model for microfinance firms that could achieve scale—something that had never been done before. He realised that a for-profit model in an arena of private competition was the only way that microfinance firms could attract capital, grow in size and have significant impact on poverty levels. In 1998, Akula roped in his mother towards the microfinance cause and the two began to hold a series of tea and samosa parties for friends and family in the hopes of attracting capital. Eventually, 357 people coughed up $52,000 (Rs 26 lakh) and SKS was born.

The jury is still out on whether microfinance takes a dent out of poverty, but SKS’s numbers tell a different story. “The poor in India are extraordinarily resilient. They have a very high rate of return on capital,” says Akula. A 10,000-rupees loan to a woman who needs to buy a scale and baskets in the hope of becoming a vegetable seller, nets her a 52 per cent return on her loan. A loan to purchase a buffalo can bring in a 74 per cent ROI. A tailor makes 111 per cent and a potter makes a whopping 236 per cent on investment. The reason for these returns is because the poor don’t have significant infrastructure costs. Most poor operate from out of their homes. They rely on their own labour and they operate in an informal economy where taxes and other legal costs are not applicable. 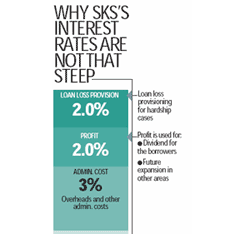 Click here to Enlarge
For all of SKS’s achievements, not everyone is thrilled about the way in which microfinance firms like SKS have gone about things. “This craze around outreach with very little depth and very little diversity of offerings is actually creating serious risk and certainly represents a deep opportunity loss in terms of what the poor want,’’ says Nancy M. Barry, formerly with the World Bank and also former Head of Women’s World Banking. She is also one of America’s 20 most powerful women according to U.S. News & World Report magazine. David Gibbons, a pioneer in the field of microfinance and head of Cashpor, an MFI which works amongst the destitute in the states of Uttar Pradesh and Bihar, says that initially people like him were delighted about the huge increase in client outreach. “Then it became clear that something else was happening. They started targeting upmarket poor in search of larger loans. Those who lived below the poverty line were completely ignored.” Akula says that his model isn’t best suited for the ultra poor. Instead, philanthropic capital should be used to graduate the most destitute into a better-off segment before they can fully benefit.

SKS and Akula do have admirers in the industry, including Vijay Mahajan, Chairman of BASIX and a guru of India’s rural economic development. Mahajan feels that Akula has made an invaluable contribution to Indian Microfinance. “He has taught the sector what is scale and sustainability while ensuring social impact,” he says. Also, attracting capital is not easy, especially in today’s severe downturn and perhaps the only hope for microfinance organisations— and, therefore, a large segment of India’s poor—is to adopt a for-profit model which invariably involves establishing a large client base before more complex services delivery.

In just under 10 years, Vikram Akula has built SKS into one of the biggest brands in rural India. A survey that pitted SKS versus two big financial brands—ING and LIC—showed that borrowers preferred SKS in overwhelming numbers. Even those who weren’t borrowers opted for SKS because of its reputation. “There’s no one else that people trust,” explains Akula. “Everyone interested in rural India has to come to us. If they don’t, they’re out of the game.” Words to take note of.

Approaching the point of maximum uncertainty