Queen of the Court

She has represented a roster of corporate giants, and actively backs other women in her profession.
Ajay Modi | Print Edition: Sep 15, 2013 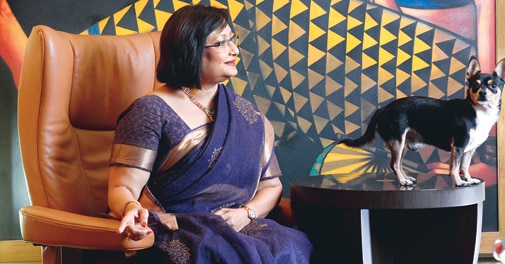 She handles some of the most high-profile legal cases in the country, but law was never her first career choice. Pallavi S. Shroff got an undergraduate degree in economics before doing a master's in business management in 1978. She could well have become a high-flying executive. But then she got engaged to a lawyer, changing the course of her life.

Today, Shroff is senior partner at India's biggest law firm, Amarchand & Mangaldas & Suresh A. Shroff & Co. "After my engagement to Shardul (Shroff) I realised that I must join this profession to spend time with my husband, because law, as they say, is a jealous mistress," says the 57-year-old.

Shroff joined at a time when only a handful of women practised law - and it was sometimes a challenge to be taken seriously. In the early 1980s, when she had just joined the firm after getting a law degree from Mumbai, banking clients preferred to wait to meet her husband, a managing partner in the firm, rather than discuss cases with her. "I've seen the profession evolve and change. I've seen the status of women in the profession evolve," she says.

Shroff recalls an incident that helped change clients' perception of her abilities. Barely a few years into the profession, she had to argue a bank-related case in court because her senior could not make it for the hearing. "This was my second or third year. At the end of this hearing, the judge ordered the party to pay Rs 1 crore to the bank. That was a lot of money then. The day the bank got the money, its chairman called to enquire about the person who got him a crore."

Since then, there's been no looking back. Today, Shroff heads the law firm's Dispute Resolution and Arbitration department, which accounts for about a fifth of Amarchand & Mangaldas's revenues. She has successfully represented corporate giants from GE, Coca-Cola and Nestle to the Tatas and Apollo Tyres in various domestic and international cases.

Last year, when the Supreme Court asked the country's top industry bodies, the Confederation of Indian Industry and the Federation of Indian Chambers of Commerce and Industry, for their views on whether natural resources should be auctioned, both turned to Shroff for legal advice. She says a number of her submissions were included in the final judgment. "We had to explain why different policies may be required for allocating resources such as spectrum, mining and water."

Kuldeep Drabu, director at Videocon, recalls Shroff's dedication while seeking to understand the technicalities of the oil business before arguing their cases. She has represented the company in various international arbitrations related to oil and gas. The legal eagle's economics and management degrees have come in handy here. Shroff has seen the evolution of business law and says there is enormous scope in financial services litigation today. "Unlike the simple bank suits for recovery in the past, today financial services include PE investment or hedge fund investment and the challenges of their exit," she says.

Having carved a place for herself in the legal world over the years, today Shroff supports other women in the profession as well. She says she prefers hiring a female candidate over a male if both are equally competent.  No wonder women account for 49 per cent of her 800 employees. Amarchand & Mangaldas allows flexible work hours for women and has a crèche for children of women employees. "Few women are able to rise in the legal profession and maybe I've been lucky," says Shroff. "I have never held back a woman from moving up because she was pregnant."

Shroff recalls a late evening meeting with a woman colleague after the crèche had shut for the day. She called the colleague to her room along with her child. "I made the child sit on my table, gave him a paper and a few crayons that kept him busy while we had our discussions," she says. It reminded Shroff of her own children and the time when most of her legal briefs had crayon marks. She calls it a "mother's life".  Now that her children are grown up, she keeps herself busy with Ninja, her chihuahua.

How much of the success is because she is married to Shardul Shroff? "I don't think the success has anything to do with whose wife I am. It just has to do with the fact that there were very few women at the bar who took the profession very seriously," she says.

And she isn't just being politically correct. Leading lawyer Harish Salve puts it simply: "She is one of the finest lawyers I have known."

Tags: Pallavi Shroff | Most powerful women in business in India

How Vanitha Narayanan came to head a tech firm in India