Microfinance in India  has grown fast. But has it also grown right?

David Gibbons
Poverty has become big business in India. So much so that a slew of storied venture capital outfits and wealthy techies—such as Sequoia Capital, eBay Founder Pierre Omidyar and Michael Dell—who are more at home analysing enterprise software or semiconductor makers’ business models, have now decided to park some of their capital with some of India’s poorest people using microfinance institutions as intermediaries. These investors—and their MFI outfits— hope that handing out small loans that average 5,000 rupees at a 28 per cent interest rate to India’s impoverished, will not just help their for-profit microfinance portfolio companies such as SKS turn a tidy profit, but will also help reduce poverty in the country.

Billions of dollars have poured into poverty alleviation in India over the past decades—but with little effect. State sponsored initiatives in delivering social inputs like health care and education have proven to be profoundly inefficient. Today, literacy levels and health conditions in rural India are appalling. Infant mortality rates are high and malnutrition is rife. Consequently, average incomes in rural India have lagged severely behind urban ones during India’s last seven years of galloping growth, adding to increasing inequity between both segments of the population.

Jayshree Vyas
Microfinance institutions say they want to fix this problem and are in a heated race to scarf up poor clients. Industry veterans, like David Gibbons, Chariman of MFI Cashpor and Nancy Barry, ex-Head of Women’s World Banking, are aghast at the nature of their activities. Microfinance institutions come in all sorts of shapes and sizes, but the main ones plying their trade in rural India are Self-Help Groups (SHGs) and for-profit MFIs. SHGs—numbering 3.4 million and servicing 45 million poor—are groups of up to 20 women who borrow directly from banks at a 12 per cent rate and then lend the money internally to members with additional percentage points tacked on. Interest income earned on each loan goes into a savings pool. In about five years, each individual from the group has a nice little nest egg of around Rs 25,000 to spend as they like. Forprofit MFIs like SKS and Spandana—only 25 of which serve 14 million people, but are the fastest growing outfits today in microfinance—have a different approach. They loan out money using the Grameen model, within groups of five women or so—but the loans are to individuals. The group exists as a collective guarantee for the loan and if someone defaults, the rest of the members have to come up with the cash. 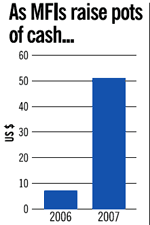 A staggering 800 million of India’s poor are starved of formal credit and MFIs can be a godsend to their poor clients who use this cash injection to try and transform themselves into successful minientrepreneurs by rearing buffalos or selling vegetables and thereby improving the hold of a fellow, put Rs 5,000 in his pocket and moved on,” wonders Srinivasan.

It makes sense that reasonably priced credit can be a lifesaver for the desperately poor, especially women. With the purchase of an inexpensive buffalo, a poor mother can generate a little more cash income and send her children to school. However, is everyone borrowing for entrepreneurial purposes? “An increase in lending to people to pump numbers up has resulted in many borrowing to pay for marriages,”says Jayshree Vyas, Managing Director of SEWA, an organisation of poor, self-employed women workers in Gujarat. Pigeonholing the poor as wise, frugal spenders, who are impervious to consumerism is naive. “I’ve even seen people spending huge amounts on DJ parties in remote villages,” says Vyas. Also, many industry observers point out that often a poor person takes out one loan to pay for another, and, in effect climbs on to a “debt treadmill”. In fact, double counting clients is a widespread if under-reported phenomena amongst MFIs.