He has shown what he could do with CDs, but his biggest bet yet is on solar power. 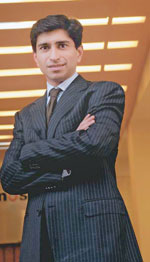 Ratul Puri,
The sun is quite strong,” Ratul Puri, Executive Director, Moser Baer, complains when he and his father Deepak Puri, Managing Director, Moser Baer, are taken to the roof of their office in New Delhi’s Okhla Industrial Area for a photoshoot. But the younger Puri immediately gets the irony. “Well, I shouldn’t complain about the sun really,” he says. Over the past three years, Puri has overseen the investment of over $130 million into a state-of-the-art photovoltaic cell plant at Greater Noida near the capital.

“You know each of the machines has to come on six jumbo jets. Just the leg of the machine is the size of our conference room,” he says excitedly. In fact, the last three years have been the busiest for Puri & Co. at Moser Baer, which has been in the throes of frenetic diversification. From its core business of recordable optical discs, the company has expanded into solar energy and home entertainment. Puri is extremely excited about the new businesses Moser Baer is entering. “The market for photovoltaic energy is by some estimates going to be worth at least $1 trillion in about 15 years, we are not getting into this business to be a bit player. I firmly believe we can take a 10 per cent marketshare and be one of the top two to three players in this market worldwide,” he says.

It was, perhaps, the same confident mindset that took Puri into the home entertainment business as well. “The optical disc business is a commodity business after all, but in the past few years we had managed to build up a brand in India, and there was also the little fact that we had managed to develop this really low-cost manufacturing process,” he says. Puri then sent his team from the optical disc business to content owners all over India and offered them this ‘low-cost’ disc.

But finding no takers for their discs, they decided to take matters in their own hands. Less than a year after the idea was first discussed in April 2006, by March 2007 Moser Baer started selling the first VCDs and DVDs under their own brand, and at the piracybusting price of Rs 28 and Rs 34, respectively. The pirates understandably were not pleased and even rioted at some places. But now Puri faces another problem. “Honestly, we just cannot seem to keep up with demand and roll out fast enough. It is a problem, but a better problem to have than no one buying our discs,” he says with a glint in his eyes.

Indeed, it was with discs that Puri first made his mark. He put Moser Baer firmly on the global map as the second-largest manufacturer of CDs and DVDs. He accomplished that in less than a decade since masterminding the company’s foray into optical discs in 1999. But Puri had his share of trials and tribulations, whether it was getting the necessary approvals from the government or scouting for money and manpower for his hi-tech project.

“I always wanted Ratul to join the company,” says senior Puri, adding, “because I feel that there is no greater joy in life than dealing with the hurdles that are thrown in front of you in your own business.” “It was a bit disconcerting,” recalls John Levack, Managing Director, Electra Partners Asia, one of the oldest venture capital investors (it invested way back in 1999), and also a member of the company’s Board of Directors, “to see a man, rather a boy, not even in his 30s, heading up this operation, while persuading us to invest in this idea.” But Puri pulled it off in smart fashion, despite the cyclical nature of the industry and its domination by East Asian firms. “We are the first company in the world to ship out recordable HD-DVDs (next generation optical discs),” he says proudly.

Incidentally, Electra Partners Asia did invest in Moser Baer (via their Mauritius subsidiary). Levack says that while the quantum of their shareholding has come down from 18 per cent to 5.93 per cent today, “We have made a nice profit on our initial investment”.

He adds: “But every time we have ever thought of divesting, we have always felt there will be a significant upside in the near future.” Talking about the home entertainment business, one gets a peak into Puri’s mind. “The home enterRs 250 crore, and the organised movie market was worth Rs 12,500 crore. In the US, Hollywood generates more revenue from 2.5 billion DVDs it sells every year than from theatre sales. The opportunities were massive,” he says. Puri’s dad compliments him saying, “This scheme was totally his idea, I had nothing whatsoever to do with this. But I think it is brilliant.” In April 2006, a team started work on the proposal.

Puri presented the idea to the board in August and got clearance. His legal team went around scouring the country for content deals. At one point of time, they were signing three-four deals every day, and ended up acquiring a library of nearly 10,000 titles. By March 2007, the first Moser Baer branded VCDs and DVDs started appearing in the market.

But the challenge did not stop there. Now that Moser Baer had made the products, they had to distribute them. “This is a company that had hitherto mostly dealt with industrial clients. This was going to be an interesting challenge,” Levack points out. Says Puri: “We have only being doing this for nine months, and we aim to reach 100,000 distribution points across the country. We want to target panwallahs and street vendors as well as big retail.”

So, what made him get into the solar power business? “If we can leverage our manufacturing strength in a business we will think about it. Solar was obvious because at the end of the day it involves layers of a substrate. Optical discs involve layers on a substrate. See what I mean?” he says.

Moser Baer Photo Voltaic (MBPV), a wholly-owned subsidiary of the parent company, is on the verge of starting production in Greater Noida by early April 2008. “We will start with an initial capacity of 40 megaWatts, but we will rapidly scale that up to 80 megaWatts,” says Puri. Along with investments in crystalline silicon wafers and concentration solar energy, MBPV claims to be the only company in the world with both manufacturing and expertise in all three methods to generate energy from solar power.

While a near-term goal of establishing a manufacturing capacity totalling one gigaWatt might seem overly ambitious, Puri has no qualms explaining the massive build-up. “Without any significant breakthroughs in technology, the cost of generating solar power from photovoltaic panels will drop 40 per cent just through manufacturing efficiencies,” he says. Such a steep decline, Puri claims, will make solar energy from thin film photovoltaic cells on par with or maybe even slightly cheaper than thermal energy. Ratul with his father
“India still uses a lot less power than the global average. We can be a global leader in solar power,” he asserts. Puri has a point. According to figures released by the International Energy Agency, the per capita consumption of electricity in India in 2006 was 631 kiloWatt hours (KWhr). In Canada, the world’s highest per capita consumer of power, that figure was a whopping 17,179 KWhr. According to a government estimate, the per capita consumption of power in the country is expected to touch 1,000 KWhr by 2012. It isn’t difficult to see that doubling of power production through conventional methods would not be possible in the next 48 months. Not surprisingly, then, Puri is gung-ho about the prospects for photovoltaic energy in India.

Those who have known Puri feel he’s quite capable of pulling it off. Ashish Dhawan, Managing Partner, ChrysCapital, says: “Ratul is very bright and ambitious. Moser is a global leader in optical media and now has the opportunity to do the same in the solar power industry.”Is there any flaw with Ratul Puri then? “He cannot say no,” says his father Deepak, adding somewhat mischievously, “If he were a girl, he would have had five or six illegitimate children by now. He has a lot of patience with people, sometimes too much.” He, however, stresses that the two of them complement each other perfectly. “I have the view from the sky, he knows the nitty-gritty of things.

I have a short temper, but he is very patient,” he says. But what does Puri make of himself? “You know, I would like to think of myself as a manager and not a promoter. I have to constantly do things to prove that I am not here because of who I am, but because I am good. As a shareholder I would be insane to sit here if someone else could give me a better return,” he says matter-of-factly.

But as the company expands, investors like Levack see the need for decentralisation as the biggest challenge. “They have made some smart recruitment, but there will need to be less hands-on control, which might be a challenge for a centralised company like Moser Baer,” he says. But when asked how confident he was about the company pulling it off, Levack simply said, “We are still invested in Moser Baer.”

The story isn’t over for Moser Baer yet. The company is now planning to sell small pen drives, even though Puri says that it is unlikely that Moser Baer will get into solid state memory soon. “If you think about it, crystalline silicon solar cells are semiconductors too. So never say never,” he says, leaving one wondering what will catch his fancy next.
TweetYoutube