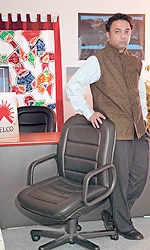 Hande, a 40-year-old energy engineer, sells solar power and his company Selco Solar Light has a solar product line for customers at the bottom of the pyramid.

Sample this. The flower pickers near Ahmedabad would usually get up in the middle of the night, get hold of a kerosene lamp in one hand, and hurry to the fields to pick flowers between 2 a.m. and 4 a.m.

Their target: to bring the flowers to market by 6 a.m., in time for the dawn crowds and before the flowers start wilting. Or take the case of silk farmers of Karnataka, who would typically use candles or kerosene lamp for lighting at the time of feeding worms in the dark (harsh light hampers the growth of silk worms). But a drop of spilled kerosene would destroy the entire basket of worms.

These are not the perfect customers for someone starting out his business. Hande thought otherwise in his initial days of creating the need for solar energy. He designed lamps keeping in mind the needs of these clients.

The result: flower pickers got headlamps.

They now have both their hands free to pluck flowers, their productivity has increased, and there’s no likelihood of their hands or saris getting burnt. The silk farmers have solar lamps in their farms.

Worms are safe and so is their livelihood. And if you thought money was an issue, Hande roped in local banks to help the flower pickers and the silk farmers get loans to buy these lamps.

Seems like a cinch? Not quite. Much before the headlamps came the idea of going solar that invited scepticism to say the very least. Hande recalls: “When I started thinking of solar in 1991, people said job nahin milega (you won’t get a job). I used to say nahin milega to nahin milega (I don’t care).” Early ’90s after all were not yet the times when people were thinking climate change.

“I get a lot of invitations for funerals because I had friends in their sixties (in 1991)—hardcore environmentalists who grew their own vegetables and baked their own bread. These were the same guys who went to Vietnam and protested against America. Solar power at that time (1991) was something that hippies in California would do,” says Hande.

It was his advisor and mentor at the University of Massachusetts, Prof Jose Martin, who instilled in him that “socio-economic needs are more important than technology”. Armed with this wisdom and academic qualifications, Hande started Selco Solar Light in 1995 along with Neville Williams (who now heads a local solar company in the US).

Hande’s first move was to push towards non-profit, but he wasn’t too sure of its sustainability in the long run. So he started a business that was decentralised, had its profit centre and seemed sustainable in the long run with an initial capital of a meagre Rs 1,000.

It’s been a roller coaster ride since then for Hande and his team. Selco incurred a loss of Rs 75 lakh in the year to March 2007. But the winner of the ‘green energy Oscars’ Ashden Award in 2005 and the Social Entrepreneur of the Year Award in 2007, Hande is undeterred by the losses, which he says are not mounting any more.

Losses for the year to March 2008 are expected to be about Rs 25 lakh. And he sure has a strategy ready in the shape of diversification.

Hande, who never wears western suits, aims to broaden his horizon and become an energy services company focussing on bio-gas and cooking energy. “We are seriously sitting in March to see whether we can create Selco-type organisations.”

Each of these set-ups would need two years of rigorous work and a lot of financing. The present setup in Karnataka could be a training base. Hande, who speaks Oriya, Bangla and Kannada, besides English and Hindi, has a proposal from South Africa to train entrepreneurs in the Selco model. “I would like to do a similar model in India,” he says.

Hande has already started building entrepreneurs though. A mid-wife in Ahmedabad bought solar light kits from Selco in bulk and now rents them out to a dozen other midwives on a daily rental basis.

There are scores of such examples. Selco with its 25 centres in Karnataka and Gujarat has 85,000 clients in all.

Is time ripe then for a national footprint? Hande is uncomfortable with the suggestion. “We did try a franchisee model last year in Karnataka but failed miserably as the model became product-based and not need-based. We got very jittery when the basic mission of Selco got compromised,” he recounts.

That would have been one of the few occasions Hande got edgy. By and large, he is calm, deliberate, and unpretentious if you believe his peers and employees. “He is unassuming to such an extent that I did not realise for a long time that he was heading Selco,” recalls Jayshree Vyas, MD, SEWA Bank.

The bank works with Selco to find out how solar energy fits in the daily life of poor working women.

They are not there to sell. “The Ministry of New and Renewable Energy did a fantastic job by making people aware of the technology. But it also came to the business of doing business. The government failed because of a lack of services.” It has stuck to the subsidy route but “why not create policy for encouraging sustainable chains?” asks Hande.

The didactic gentleman has many an issue weighing on him.

Probe him on the challenges and Hande has a bone to pick with non-profits because “they do not catch the essence of sustainability and financial transparency. You do not keep subsidising all parts of the chain.” The conundrum of high salaries, too, baffles him. “The salary levels of IT and financial services have destroyed my ability to grow.”

Hande, however, has an interesting mix of talent in his 145-strong workforce. Thomas Pullenkav, 40, Vice President, Selco, has been a witness to Hande’s journey.

He has had stints with the Institute of Rural Management, Anand, National Dairy Development Board and Tata BP Solar. Sarah Alexander, Assistant Manager, Innovations, has done her Masters in conservation biology from the US. 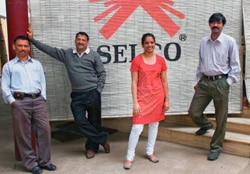 The Lightkeepers
The 26-year-old specialises in animal behaviour and has worked in Lincoln Park Zoo in Chicago. She stumbled upon Selco, courtesy Google. “When I read about Harish’s work, I was determined to work with him.” And compensation? While Thomas cannot give up the excitement of “reinventing the wheel”, Sarah says, “I don’t think I came with high expectations.”

He is one of the trail-blazers and is inspiring others.” Speak to his professors at IIT Kharagpur, his colleagues, his partners or clients; every body seems to have been swept away by his “dedication and commitment”.

Talking of Hande, Don Mohanlal, President and CEO of The Nand and Jeet Khemka Foundation, quotes Spanish philosopher Antonio Machado, who has said: “Traveller, there’s no path. Paths are made by walking.” It’s not that Hande invented the concept— but knowing what he needs to pull it off has indeed proved vital.