Institutions with a lower appetite for risk are better able to face the global financial storm. The KPMG annual Best Banks Survey is a check-point on the performance of the banking system.

September 2008 is likely to be remembered as the month that saw the collapse of the financial world, as we knew it. Icons of Wall Street went belly-up, lost their identity by converting themselves into commercial banks, sliced themselves up into pieces or were forced by regulators to merge with other banks. A large number of marquee names are now owned by governments. Wall Street will never look the same again.

Amongst all this global turmoil, there is a positive outlook for India. As we analysed the audited results (2007-’08) of banks in India for the Best Banks Survey, we could not but compare the strength of the Indian banking system to the over-leveraged banks in the US and Europe.

In the previous year’s assessment (Business Today, February 24, 2008) we had decided to add more weight to the strength parameters vis-a-vis the growth and size parameters. Time has proven us right.

The world order changeth?
China and India have suffered— what can only be called—collateral damage. China, due to its direct linkage to diminishing demand in the West for its massive exports, and India, due to the consequential damage resulting from the significant pullout of investments by global investors from its capital markets. However, given the massive war-chest of China, the macroeconomic structure of India and the relatively insular nature of their large banks, the two seem to be relatively less damaged. Click here to Enlarge
Yet, cracks are starting to appear in Indian banking, too. While Indian banks have limited or no exposure to the subprime crisis, they seem to be struggling to cope with the liquidity crisis. Tight liquidity has resulted in increased interest rates across the board, and a cutback on lending by the banks to the real estate sector. The Indian manufacturing sector and the economy as a whole are feeling the impact.

Additionally, the flight of foreign capital from the stock market has dramatically reduced the collateral value of promoter shares, further aggravating the problem of accessing capital. The RBI has acted swiftly to contain the damage by reducing the CRR, SLR and repo rates. It has also provided lines of credit (Liquidity Adjustment Facility) to provide liquidity to the tune of Rs 2.5 lakh crore. 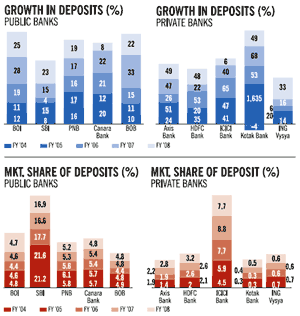 Click here to Enlarge
However, the systemic damage is starting to tell. While most analysts have focussed on the shortterm impact of the financial crisis, a longer term view starts presenting some very interesting questions and possibilities. At a banking and financial services industry level: with the large global banks impaired for the foreseeable future, can consolidated banks from India and China take on a more global role? Could draconian risk assessment norms imposed by the G20 result in a tectonic shift in risklinked asset pricing and result in certain types of leveraged models completely disappearing? Given all these changes, will certain banking models and the very existence of some banks be questioned; with universal banking no longer fashionable— given that off-balance sheet transactions are likely to be brought into the ambit of regulatory supervision and investment norms tightened—the current models of investment banking and fund management are expected to undergo a fundamental structural change.Indian banks’ finest hour? 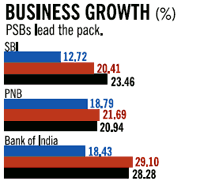 Click here to Enlarge
The KPMG Annual Best Banks Survey is a check-point on the performance of the banking system in India. The past five years have seen the Indian banking industry gain significant strength. This strength is reflected in the high growth in credit and size of the balance sheets; well diversified portfolios across corporate, retail and SME; improved margins and spreads; healthy asset quality; reduction in non-performing assets with improving asset coverage ratio; and improvement in the implementation of the SARFAESI Act through effective use of debt recovery tribunals.

Not surprisingly, PSU banks, with low-risk appetites and being conservative followers of regulatory guidelines, have significantly improved their position. Driven by better technology and risk principles, they have seen considerable improvements in their asset quality, operational efficiency, spreads and margins.

However, crucial challenges lie ahead in the immediate future. Key amongst these is the need for managing capital for addressing the needs of a credit-hungry India, in the face of stricter adequacy norms under BASEL II guidelines and substitution of foreign currency borrowings. 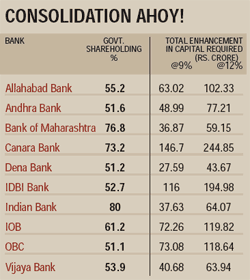 For PSU banks, where government ownership has been reduced to just above 50 per cent, this poses a major structural and ownership challenge.

Consolidation ahoy!
Capital requirements and management is one of the most critical challenges Indian Banks are likely to face over the next few years. Most banks are adequately capitalised— the median capital adequacy ratio for large banks in 2007-08 was 12.34 per cent as against 12.02 per cent a year ago. The RBI estimates an additional requirement of Rs 10,000 crore over the next five years to support continued credit growth at 12 per cent capital adequacy.

This additional requirement for capital is arising due to three key factors: Incremental credit required for sustaining the current levels of economic growth; servicing of over $220 billion (Rs 11 lakh crore) of external debt over the next few years, constituted largely by external commercial borrowings (ECB). A large part of this borrowing is likely to be re-financed through domestic borrowing given the credit tightness in the international markets and higher credit spreads for emerging markets like India; and, third, higher capital requirement on account of implementation of the BASEL II norms and the anticipated impact from slippages in asset quality due to the ongoing credit crisis.

Given the state of the capital markets, the likelihood of Indian banks being able to raise such a staggering amount is remote. The implications for the Indian banking system are immense: banks with strong balance sheets and a focus on stakeholder rewards might still be able to access the capital markets, although at significantly depressed premiums. Banks also need to improve their efforts to efficiently collect low-cost deposits through their more modernised and extensive branch network. 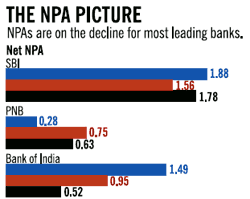 Click here to Enlarge
The weaker and smaller banks may not have either of these options and may, therefore, need to either merge with larger and stronger banks, or seek infusion of capital from the government.

Low-cost borrowings are back
The collapse of global investment banks has an important lesson for financial markets. Investment banks based their “funding strategy” on high-cost bulk deposits for growing their balance sheets. The first consequence of the credit crunch was the flight of bulk deposits to perceived safer investment options, leading to a rapid erosion of the funding base. This has put the spotlight back on growth through the humble “low-cost deposit” as the more stable banking model.

Most Indian banks have established a strong franchise to raise low-cost deposits. The ability to grow that base is critical to their effective management of the balance sheet for maintaining adequate liquidity, lower their cost of borrowing and subsequently higher net interest margins and finally for establishing a diversified risk-based asset product portfolio. 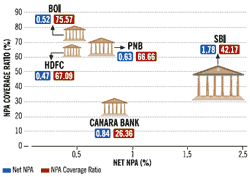 Click here to Enlarge
Private and public sector banks in India have increasingly focussed on the growth of their low-cost deposit base. By leveraging technology, branding and through advertising and large branch networks, these banks have built impressive deposit-conducive franchises.

In the next few years, they may have to consider the value and productivity in their customer facing processes as their franchise size grows. Effective channel management, offering value-added services to attract customers, and brand recall and recognition are likely to be key imperatives to support the growth of low-cost deposits.

The weaker and smaller banks are likely to face significant challenges in attracting low-cost deposits in a tight liquidity scenario, impacting their ability to grow, as will banks that have a significant proportion of their funding through bulk deposits.

Operating costs
Here’s another positive view of the Indian banking system. Most banks have shown good growth while keeping their operating costs under control. The cost-to-income ratio, which reflects control over operating costs, has shown an improving trend and this is especially true of the large banks. The improved use of core technology, better operating controls, cost reductions due to optimised central processing models have resulted in improved returns to stakeholders.

However, most banks are also guilty of silo-based cost increases during the credit expansion phase in the last five years. While they have created valuable distribution franchise models to distribute capital market products and increase share of low-cost deposits, cost inefficiencies were generally hidden in the high-growth numbers. If, as predicted, the Indian economy does slow down for the next few years and retail credit off-take reduces significantly due to high interest rates, these inefficiencies could start showing up prominently.

Private and foreign banks have already started rationalising their business structures and may most likely shrink their fixed costs as a response to the slowdown. PSU banks, without as much flexibility to lower their fixed costs, may, therefore, need to improve their incomes through efficiency and productivity measures for controlling their cost-to-income ratios.

Indian banks need to respond rapidly to the market slowdown by lowering operating costs in response to potentially lower incomes. Banks that can continue to increase their market share, at either the same or lower costs, are the ones likely to emerge winners.

Wither asset quality?
The global crisis and the resultant slowdown in the Indian economy is a real test for Indian banks in terms of the asset quality of their existing portfolios and for any new business that they are willing to undertake. The asset quality of Indian banks has shown substantial improvement in recent years—median Net NPA improved 0.73 per cent as against 0.83 per cent in ’07. However, 2008-09 has the potential to reverse this trend.

The rapidly changing business and economic scenario is likely to present significant challenges for the banking system, which could potentially see an escalation in their NPAs. The challenges include: rapid shrinkage in corporate balance sheets, specifically those exposed to commodities and metals; funding of expansion and acquisition plans by highly-leveraged corporates; export-oriented firms facing a slowdown in business due to weak global demand; and volatile currency movements impacting corporate cash flows.

The worst-case scenario for India, which assumes GDP growth will reduce to 6 per cent over the next few years, is likely to create a major challenge for Indian banks. Should they be focussing on growth or should they focus on keeping NPAs under control? Banks may then have to extensively rely on refurbished and dynamic credit scoring models, de-centralised decisionmaking based on ground level relationship assessment and increasing use of tracking MIS to control their portfolio in these uncertain times.

Indian banks, in contrast to their global peers, appear “strong” from an asset quality, diversified risk portfolio and “low-cost” deposit base perspective. This is partly due to their effective management of the business and partly due to the conservative nature of our bankers and the regulator. The key question now facing the industry is: can the Indian banking system maintain its position in a sustainable manner, even as dark clouds gather?