Chairman Nayak’s policy of looking before venturing has made Axis Bank immune to many of the industry’s woes.

Sixty-one-year-old Pangal Jayendra Nayak has just eight months left to retire from the country’s third-largest private sector bank that he created from scratch. A media-shy Nayak has bit by bit created a strong foundation for the bank without much fanfare. But even as he waits for his innings in the 14-year-old bank (he was an IAS officer for 25 years prior to this) to come to an end, this Cambridgeeducated professional is not sitting idle: he is busy setting the agenda for the bank’s future. Jayendra Nayak
Over the next decade, Nayak wants to position Axis Bank more as an international bank with a strong presence in several parts of Asia. In a way, he has already made a beginning by building a $2-billion (Rs 10,000 crore) overseas book with presence in China, Hong Kong, Singapore and Dubai, among others. International lending today accounts for 8 per cent of its total advances. “Our current international strategy is to consolidate business in Asia. We may subsequently look elsewhere,” says Nayak.

In the domestic market, Nayak’s bank will aspire to become less of an urban or large city-centred bank, and will, instead, look for a much stronger presence in smaller towns and villages. “That process is already underway and by the end of this year, we should have a presence in more than three-fourths of the district headquarters,” reveals Nayak.

Axis today has 241 branches in metros, 289 in urban, 252 in semiurban and 27 in rural areas. In fact, you have to believe this man who controversies, not withstanding to create a bank that has been ranked #2 in the BT-KPMG Best Banks study. Interestingly, Axis Bank is way ahead of HDFC Bank (the 5th-time winner of the BT-KPMG survey) and stalwarts like ICICI Bank and SBI in overall growth, size and strength parameters. The bank’s stupendous success clearly owes to its unique strategy of doing things differently from some of its peers, for instance, not focussing predominantly on any one particular business segment (like retail banking) in an aggressive way. Axis has only 24 per cent of its total book in retail. 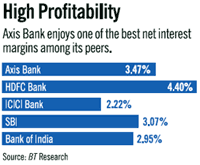 Caution and control have been the watchwords at Axis. In early 2000, when everyone was getting into retail banking without focussing on the retail liabilities (retail low-cost deposits), Axis Bank first began by looking at the liabilities side of the business, and only after that was taken care of satisfactorily that it entered retail lending in 2003. “We realised that the focus on retail banking would need to be as strong on the liabilities side (building a fastgrowing current account and savings account franchise) as on getting into retail lending,” says Nayak. Today, Axis has the fastest-growing CASA franchise amongst all the banks in the country, and this has enabled it to achieve a very competitive cost of funds, which, in turn, has enabled it to price its loan assets competitively.

“A rapid pace of loan growth would not have been possible without this sequencing,” says Nayak. On the SME side, too, where many banks are stressed, Axis has approached very cautiously.

“Our net NPAs (nonperforming assets) on the SME side are very low at 0.4 per cent. It is amongst the best quality portfolio we have,” says Nayak. The bank has adopted a bottom-up approach for developing its loan portfolio in the SME segment.

Hemant Kaul
Concurrently, the bank devoted a lot of attention to distribution issues before entering every single retail as well as corporate segment. “To avoid getting into the commodity trap, we have developed strong alternate channels, set up differentiated sales model and created specific products for different customer segments,” says Hemant Kaul, Executive Director, Axis Bank.

For instance, when the bank decided to enter into agricultural lending, especially tractor lending, it initially relied on dealers in tractor financing. But later, when it found that NPAs were rising faster than its comfort level, it stopped sourcing from dealers. “We set up our own field team and recruited people on our payroll,” says Nayak.

The bank had also set up a subsidiary, Axis Sales, to source retail assets, in line with the Direct Sales Agents. It has helped gain a much better control over the quality of people who source business for the bank. This, in turn, has ensured a higher quality of asset acquisition. “We also have a policy that mandates that no outbound telephone calls can be made to anyone who is not a customer of the bank, for we realise that these can be intensely irritating and violative of individual privacy,” says Nayak.

There is also no danger of NPAs from the corporate portfolio, as sector concentration risk is very low. “We have handled our corporate book in such a way as to have no undue concentration in any one particular sector,” reveals Nayak.

Pankaj Namdharani
But there are also challenges for the bank. Pankaj Namdharani, VP, SPA Securities, says the future expansion in rural and semi-urban areas and in the SME sector is likely to be a time and resource consuming affair. “It has very little presence in the international market, which is a cause of concern,” says Namdharani.

As Nayak readies to retire, he leaves behind a bank that’s capable of not just weathering the economic slowdown, but also emerging as one of the leading financial services players of consequence.