This is a turnaround story of a fund house that was known more for its big product launches, aggressive fund management and distribution strategies than consistency in performance.

Nimesh Shah, MD & CEO, ICICI Prudential AMC
Dipak Mondal
This is a turnaround story of a fund house that was known more for its big product launches, aggressive fund management and distribution strategies than consistency in performance.

ICICI Prudential Mutual Fund started changing its strategy after the global financial crisis in 2008. Mutual funds globally focus on delivering consistent performance of their products, says Nimesh Shah, Managing Director and CEO. "We felt that if we could ensure that the performance of existing funds remained consistent, inflows would come into these funds." 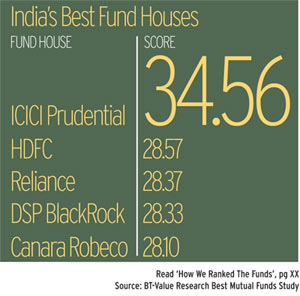 The change in approach has worked well for the asset management company (AMC). Eight out of 22 equity funds and seven out of 15 hybrid funds figured in the top quartile in their categories in 2012 compared with only two out of 13 equity and two out of 10 hybrid funds in 2007.

"We realized that it is not necessary to hire star fund managers. It is better to focus on discipline and processes," says Shah. The fund house has developed robust in-house processes for portfolio construction, stock selection, risk-control and portfolio revision.

But the most significant change was in the fund management approach. The AMC, which had tried the absolute return approach (where the fund tries to give positive returns irrespective of the market direction) in the past with some funds, and had failed, switched to a relative return approach (where the fund performance is measured against a benchmark or category average) "Now, our focus is on relative performance and all we are trying is to beat the benchmark on a consistent basis. This way the probability of top quartile performance is higher," says Shah.

It also merged funds, which were similar in character, and cut down on new launches. In 2012, ICICI Prudential US Bluechip Fund was the only equity fund it launched.

The AMC's new strategy to catch investor attention seems to be paying off. So far, the fund appears to have walked the talk.

*An earlier version of this story had incorrectly mentioned the figure at Rs 7,968 crore. It has now been corrected to Rs 87,968 crore.