Fund Manager Yogesh Bhatt <em>Photo: Rachit Goswami</em>
Tanvi Varma
The ICICI Prudential Balanced Fund returned 11.6 per cent during 2012/13, surpassing the eight per cent returns delivered by its benchmark Crisil Balanced Fund Index. Despite being a balanced fund, which holds 70 per cent of assets in equities and the remaining in debt, the ICICI fund has also managed to match the returns posted by the National Stock Exchange's benchmark Nifty index in the past five years. Yogesh Bhatt, the fund manager, says three factors led to the fund's superior performance - extra conservatism in stock selection, avoiding any sector skew, and a bottom-up stock selection strategy. The fund is biased towards largecap stocks. The top three sectors in its portfolio are banking, auto ancillaries and technology. "Although the allocation to banking is lower than the benchmark, the fund has invested in private lenders such as IndusInd Bank, Yes Bank, HDFC Bank and ICICI Bank that have outperformed the sector and offer a better credit and risk profile than state-run lenders," says Bhatt.

Among the auto ancillary stocks, Amara Raja Batteries (4.5 per cent of the fund's portfolio) and Motherson Sumi (2.9 per cent) have performed extremely well. Their value has tripled since the fund invested in them a year ago. Motherson Sumi's margin has recovered and its sales volume has grown in the overseas market, says Bhatt. "Amara Raja Batteries has gained share from Exide in the battery replacement market and has expanded capacity," he adds.

The fund has trimmed its holdings in auto ancillary shares to 7.37 per cent as of March 2013 from 11.2 per cent in December 2012, but Bhatt still expects a compound annual growth of 15 per cent from the stocks. 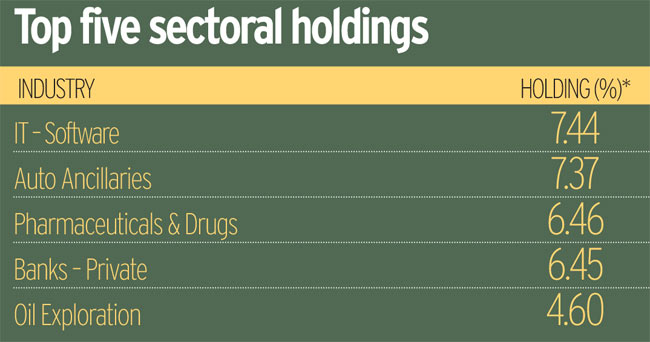