A.K. Mukherjee, Director Finance and CFO, Exide Industries
An early two years ago, the auto sector was booming. Demand for automotive batteries picked up so fast that we struggled to meet the requirements of carmakers. We cut down on replacement volumes due to capacity constraints. Our market share in the replacement segment fell to 25 per cent from 35 per cent before. We have recently tied up with US-based East Penn Manufacturing Co. and Japan's Shin-Kobe Electric Machinery Company to improve processes, designs, and quality control. We have also acquired two units for home UPS systems in Uttarakhand since December 2011 to gain market share in the growing segment.

As told to Manu Kaushik

Naresh Bhansali, CEO (Finance, Strategy and Business Development)
Emami has been able to enhance shareholder wealth over the decades thanks to a differentiated business model. The initial investors, who invested Rs 4,000 for 400 shares (in 1979/80), are now owners of shares worth over Rs 3.36 crore. The stock has delivered 300 per cent returns to institutional investors in the past three years. Emami was listed on the Calcutta Stock Exchange around 1980. However, its market value was very low and the stock wasn't frequently traded as Emami was a closely held company. We came out with a follow-on public issue in 2005, which made Emami a widely held company. The big turning point for Emami came in 2008/09 with the acquisition of Zandu Pharmaceutical. Emami's turnover at the time was around Rs 600 crore and market capitalisation was about Rs 1,500 crore. Zandu was almost one-fourth of our size. Still, we assigned a valuation of Rs 1,350 crore for Zandu. This was because we envisaged a great business potential and were confident of converting this acquisition into a success. We changed Zandu's manufacturing processes from manual to mechanical, from traditional to scientific, and merged its consumer goods business with Emami. In the first full year of operation, Zandu's operating profit grew three-fold.

Emami's market value is now around Rs 9,200 crore. Last year, our dividend payout was about 50 per cent. On a normalised level, we have maintained a dividend payout ratio of 25-30 per cent for the past three years.

Kamal Kishore Baheti, Director and CFO, McLeod Russel
The tea business is cyclical in nature. In the past decade, we have seen both the best and worst of times. But some smart steps we took in the past three years have resulted in a healthy balance sheet, growth in bottom line and spreading of risks.

Earlier, we were dependent on one locality (Assam). We acquired three companies in Uganda, Vietnam and Rwanda between 2009 and 2011. In recent years, we have been trying to minimise the risk of tea price fluctuation. In our own plantations, the cost structure is fixed. So any fall in prices hits the margin instantly. We are now buying leaves from small growers. We have a steady margin of 20 per cent in this segment. These steps have helped the company reduce its debt levels significantly, while increasing the asset portfolio. Today, our gross debt stands at Rs 240 crore. 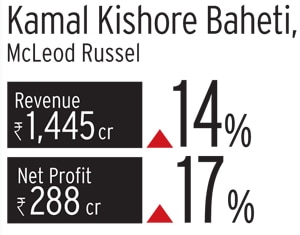 Our net debt is at Rs 40 crore. That's because we have Rs 170 crore of tax-effective deposits with NABARD and some cash reserves. The debt-to-equity ratio is 0.15, much lower than 1.1 in 2004. We acquired Williamson Tea in 2005. We took on Rs 200 crore of debt. Within a year, we reduced the debt by Rs 140 crore through internal resources and a share sale of $20 million to institutions. Since then, there's no looking back.

As told to Manu Kaushik

L. Kishore Babu, Divi's Laboratories
Divi's Laboratories has transformed over the past 18 years. From being just a research outfit, the company now has multiple manufacturing facilities for niche pharmaceutical ingredients in the generic and custom synthesis segments with strong presence in advanced markets.

When India signed to be a member of the World Trade Organization's convention on patents in 1995, Divi's realised the potential of working in the patentcompliant regime. The company conformed to intellectual property from the inception of its manufacturing operations in 1995.

The company started off making only patentexpired active ingredients. After proving its skills in process chemistry, the company began making ingredients for patented products under custom synthesis for overseas pharmaceutical innovators. 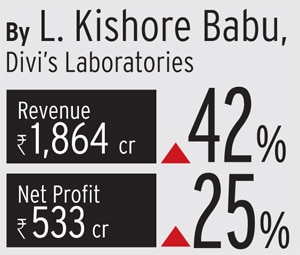 Although the industry had time until 2005 to conform to the new patent regime, we consciously avoided short-term temptations. This gave us the earlyentry advantage. Over the years, the relationship with large pharmaceutical companies grew and resulted in good business for us in the custom synthesis space.

The past two years have seen significant investment towards capacity additions at Divi's special economic zone in Visakhapatnam where we have also set up a unit for several new products. The focus on cost efficiency and objective capacity expansion over the years helped the company to be debt-free and competitive. The focus has also been on niche products and exports to advanced markets.