Quick returns from trading coal on the commodity exchange have made the difference.

Mohit Aggarwal of AMIL at a coal-trading site
Mahesh Nayak
It had never been done before. In 2011, Aastha Minmet India Ltd (AMIL), formerly a steel trading company, moved into coal, buying it from overseas. But instead of hunting for buyers, it began - for the first time in India - trading it on the commodity exchange. 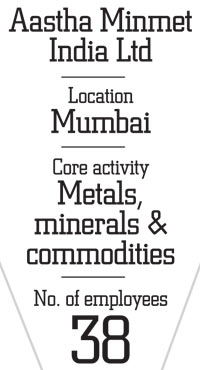 This gave it an immense advantage. Coal buyers are allowed 90 to 120 days to make payment after receiving their supplies, but by using the exchange, AMIL was able to get payment within 10 to 15 days.

This left AMIL another 75 to 105 days to pay its own suppliers, so it used the money instead to buy more coal and trade that as well on the exchange. Starting with 20,000 tonnes of coal in 2011/12, mainly from Indonesia, AMIL now imports a million tonnes. "This year (2013/14) we plan to import three million tonnes of coal," says Mohit Aggarwal, Chairman and Managing Director, AMIL.

Aggarwal is considering going in for an initial public offering soon to raise around Rs 42 crore. "The money will help us buy stakes in existing and operating coal mines," he adds.

"We plan to sell coal to small power companies whose projects have stalled due to non-availability of coal and in return get power which we will trade on the power exchange."