Nachiket Mor gave up a dream career at ICICI Bank to try and make a difference to the lives of the poor. 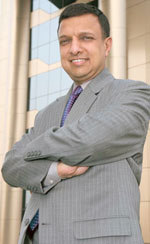 Nachiket Mor
Paradoxes abound in India. It is said that for every hypothesis about this country, the opposite is also true. So, is it surprising that a top honcho in the country’s largest private sector bank should emerge a champion for the poor?

Nachiket Mor, 43, Deputy Managing Director of ICICI Bank, recently quit his career of two decades to head the newly-founded ICICI Bank Foundation for Inclusive Growth. If renunciation stories in general are interesting, then this one is doubly so for what Mor intends to do and how he plans to do it. “The idea is to make the markets work for the poor,” says Mor. The poor and the markets, one would imagine, would be the most disconnected worlds. Yet, those are the linkages that Mor wants to forge in the belief that the markets—agenda-less creatures that they are—have an appetite for anything that fits their frame of requirements.

Mor’s conviction about the strength of the markets comes from his own experience of 20 years, especially the most recent one of driving the rural banking strategy at ICICI Bank. The business model initiated by him in 2003 can be summed up in three words: “no white spaces”. Simply put, it meant (and means) that the bank should be present within 10 km of every rural customer. Relying on franchisees, instead of branches, for expansion, this business model changed the very paradigm of financial access in India. In about four years, the rural portfolio of ICICI Bank, in March 2007, was a sizeable Rs 20,179 crore; its rural customer base: 3.5 million. “Nachiket generated a lot of excitement in the rural space,” says a former colleague. And now, Mor wants to push further down towards the bottom of the pyramid, and with good reason. “The bottom is not a tiny sliver; it is ‘the’ pyramid,” says Mor.

Mor, however, may well be equal to the task. His long-time mentor, N. Vaghul, Chairman, ICICI Bank, says: “The country needs a second freedom movement— a ‘Quit Poverty Movement’.” Vaghul, who admits he is as fond of Mor as of his son and, therefore, positively biased towards him, believes that Mor could be a natural leader for such a movement.

The reference to the movement led by the Mahatma may not be as misplaced or as pompous as it may first seem.

Most people who have known Mor for a long time can only talk in superlatives about his strong sense of social responsibility and passion for development. As K.V. Kamath, Managing Director and CEO, ICICI Bank, who recruited Mor for ICICI, then a development financial institution, in 1987, points out, this passion was evident from the very outset itself. “The placement director at IIM Ahmedabad asked me why was I even wasting time making an offer to the top 10 students (of whom Mor was one)? But I was willing to bet that Nachiket would join us because I saw him wanting to do something different,” he recalls.

This same commitment to development was also evident when he returned from the US after completing his doctorate from University of Pennsylvania with a specialisation in Finance from Wharton School, in the mid-’90s, leaving behind the prospect of halfa-million-dollar salaries. “In those days, people who went abroad did not come back. His burning ambition was to do social good and he believed he had a platform to do so at ICICI,” says Kamath.

Mor’s brilliance, personal integrity and simplicity make him a great magnet for people. “Anything for Nachiket,” say most people who have worked with him and that includes Kalpana Morparia, MD & Chief Executive, ICICI Holdings, who has worked with him since 1987. “Few men possess his rare combination of character traits. On the one hand, he can discuss the most esoteric of financial topics with the world’s sharpest men; on the other hand, he can roll up his sleeves and get into the dust and heat of India to get work done,” says Morparia. K.V. Kamath
Juniors vouch for the fact that he is “a person who empowers you and then is very exacting in his standards”. Says Ram Kumar, Head (Human Resources), ICICI Bank: “He stokes the fire in other people. He is also the kind of person who will stand by you against a howling mob not because of his friendship with you but because of his conviction.”

Add to it what Kumar calls the lack of individual covetousness in Mor and the combination exercises tremendous influence over people. Vaghul remembers how, when ICICI wanted to reward him with an accelerated career path after he returned from Wharton, Mor expressed his disinclination to receive any special treatment. Mor, however, rose meteorically at ICICI Bank where he headed key functions and was considered a critical member of the core team.

Along with the passion for development and his ability to inspire people, Mor is also a sharp thinker. Kamath says he is one of the finest lateral thinkers in the country and can make linkages between diverse situations to draw up solutions that may seem unfathomable to most.

His nature suits his new job profile; that’s good, since he intends to spend the next 20 years or more with the development agenda. “I will find something else to do if India becomes a country with a per capita income of $23,000 and more,” he says. 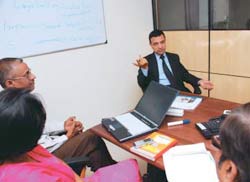 Nachiket Mor at work
His previous rural banking assignment has given him deep insights into what needs to be done. “On several occasions, I have sat across a farmer asking for money when I know that he does not have it. There is little point to that conversation,” Mor says, as existing product designs often do not offer solutions. Why do weather insurance payments take almost two months to pay? Why are credit histories not being built for microfinance customers who are low on defaults? Why are there no microfinance institutions in northern states such as Bihar? He rattles off the questions, which also offer a glimpse into his priorities.

Mor believes that the existing institutions and products fall short of addressing the needs of the addressable population, and so plans to catalyse the formation of a host of specialised institutions that are linked to both communities and broader markets. “These institutions will be very different from regional rural banks, cooperative banks or local area banks, which are seen as selfcontained entities. Our model will have a more open economy architecture,” he says.

Hence, the Foundation intends to have a broader, more philanthropic focus. And it plans to intervene aggressively in many areas by catalysing investments. (see Future Plans on top and Operating Business Models below). And he certainly intends to measure himself by the size of the investments that he is able to channelise to his area of work.

Though Mor has a lot working for him and his mission, there are pitfalls, too. Curiously, Mor’s paradoxical nature itself may militate against his success. Kumar who has worked with Mor for over seven years, believes that Mor has no patience with routine and no appetite for political maneuvering that is integral to every situation. “Nachiket is a sharp business strategist. He knows his every rupee. But he needs a Krishna— a political strategist— to his Arjun.”

Success, too, may have a few unplanned consequences. Dileep K. Ranjekar, CEO, Azim Premji Foundation, believes that while large private initiatives are welcome, they may also reduce the pressure to perform on the existing state-run delivery channels as has happened with the Public Distribution System for food. “Also, one well meaning organisation’s success may lead to the entry of other, less scrupulous entities, which may exploit the system purely for profit,” says Ranjekar. He adds though there is space for multiple experiments, working to reform the existing systems may be a better idea.

Mor is alive to the idea that, perhaps, the markets may not have the complete answers to everything. However, “in almost all cases, they add value”, he says. Significantly, Mor is starting out on his development agenda at a time when “inclusive growth” has become a chant across political and corporate India. There is tremendous interest in doing good for India among various players, globally and within the country, says Kamath, adding that Mor, “with his stature, will be able to provide the thought and organisational leadership needed to marshal these resources”.

Can he really make a difference? The consensus seems to be a resounding affirmative vote. So, readers can expect to hear as much, if not more, of the man in the years to come.