He wants to upend the governance system so that power returns to where it belongs: the people. Arvind Kejriwal
From the balcony of his 4th floor apartment at Kaushambi, A middle-class neighbourhood in Ghaziabad (UP), Arvind Kejriwal (39) points down at a row of lamp posts along the street-all of them without lamps.

"These lamp posts don't have lighting and the billboards that they bear are unauthorised. So we asked the municipal commissioner to hand over the management of these poles to the residents. We will get them working without spending a rupee by selling advertisement rights and using the revenue to fit lamps on them," he says.

"But the municipal commissioner doesn't look likely to do that." The former Indian Revenue Service (IRS) officer, whose humility, unfailing civility, common sense, and amused-school-boyish smile strike you even before he starts to explain his work, appears at once to be a very heartening moral force in a very depressing urban setting.

Kejriwal's home is not far from Delhi's largest slums and 'resettlement colonies' (areas that are slightly better than slums, where government houses people who become homeless due to slum clearance), which he uses as his "laboratories" for public action.

Parivartan, an unregistered "people's movement" that he founded in 2000 in Sunder Nagari, a resettlement colony in eastern Delhi, has been helping thousands of the city's most vulnerable people use Right to Information (RTI) Act 2005 as an instrument of getting their work done in government departments and the police without paying bribes.

Kejriwal is also considered-along with social activists like Anna Hazare, Aruna Roy and Shekhar Singh- one of the most important contributors to the RTI Act, which allows any Indian citizen to ask for government records at the Central and state levels on payment of a small fee.

Kejriwal's work makes one realise how India gummed itself up in corruption and inefficiency by turning straightforward concepts into complex systems that no one understands. Democracy, for example, simply means power to the people.

"But we allowed it to be turned into power to a frightful labyrinth of self-serving bureaucracy that the vast majority of the population neither understands nor benefits from. Where is democracy in India? I have never been able to understand," says Kejriwal, who was honoured last year with the Ramon Magsaysay Award for Emergent Leadership (2006) for fighting corruption with the RTI law as his main weapon.

Result: 'public servants' lord over suffering masses instead of serving them, public services remain largely dysfunctional, and public funds are misappropriated almost as a rule. The change that Kejriwal seeks is also simple: upending the system. He wants a topdown system to be turned on its head so that people are able to realise the power to govern themselves and all elected representatives and the bureaucracies become truly subservient to public interest.

If that sounds like an impracticable model of governance, Kejriwal's small experiments in local selfgovernance are already pointing towards amazingly practical answers as also the rot in the system.

In Kaushambi neighbourhood, where he lives with his parents, wife Sunita (also an IRS officer), and two kids, Kejriwal has led the local residents to withhold their property tax payments until the municipal authorities complete the pending public works to their satisfaction.

It's arguably one of the rarest public actions in an urban area in India, that audaciously re-asserts the citizens' right to accountable governance.

The Kaushambi experiment, which Kejriwal hopes will be tried elsewhere in the country, has not yet yielded very encouraging results.

But it has come as a frightening realisation that urban India is miserable- millions of people crowded together in our pullulating cities, held hostage by systems that concentrate all power in corrupt bureaucrats and harbour effete elective bodies. "We have found that even elected representatives in municipalities don't have the power to carry out the will of the people.

Power resides in municipal commissioners and other bureaucrats. So unlike in villages, where Gram Sabha and Panchayati Raj institutions ensure some amount of accountability of public servants, urbanites have almost no control over local governance," he says.

In his recent journeys in India and abroad, Kejriwal has been on the lookout for effective models of local self-governance, which, he believes, is the only way India can rid itself of corruption and realise the democratic rights of the people.

"In a West Bengal village that I visited early this year, a number of villagers voluntarily surrendered parts of their land to a plan to construct a road, which was discussed in Gram Sabha and then approved by the Panchayat. That's participatory governance. What would have happened if the government had taken it upon itself to acquire that land? Unrest and chaos, I think."

Kejriwal's most intimate brush with the government started in 1995 when he and his wife, recently married and fresh out of IRS training, joined as Assistant Commissioners in the Income Tax (I-T) Department, Delhi. Life carried on normally except that Kejriwal was increasingly troubled by the all pervasive culture of bribery in the I-T department.

By 2000, he was already encouraging people not to pay bribes to get their work done. That's when he founded Parivartan, which filed a public interest petition (PIL) seeking transparency in public dealings of the I-T department and held a Satyagraha outside Chief Commissioner's office. Kejriwal then started taking advantage of all the long leaves that his job permitted to work full time for Parivartan before resigning as Additional Commissioner in 2006-not a comforting decision for his middle class family. "His resignation was not unexpected but it reduced our financial security. So I was worried about the future of our children," says Sunita, Kejriwal's wife, who otherwise has always been supportive of her husband's crusade. 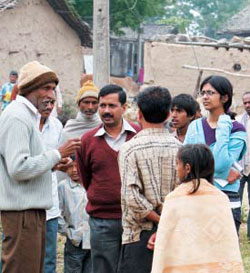 Kejriwal on a mission
Search for and research on viable local self-governance models, particularly for urban areas, make up one of the main fields of work undertaken by Public Cause Research Foundation (PCRF), which Kejriwal founded last year with $50,000 that he received as Ramon Magsaysay prize money. Currently functioning with only three full-time workers and helped by a number of senior advocates, PCRF has enabled petitioners across the country in filing of 20-25 RTI cases in the high courts. The foundation has also taken up work in ascertaining the areas of judicial reforms.

Meanwhile, Kejriwal's work at Parivartan continues. In a city that has long suffered from paralysis in community action, he has been successful in using 7-8 dedicated young people-most of them from poor and troubled neighbourhoods-in bringing about some of the most inspiring public actions that Delhi has ever seen.

In November 2004, for instance, Parivartan used Delhi's newly enacted RTI law to obtain 9,000 pages of communication between government agencies and the World Bank that led to stalling of a project for privatisation of water supply.

"The project would have hired 84 foreign experts for 21 water zones in Delhi at a total annual salary of Rs 105 crore, while the total annual budget of Delhi Water Board then was Rs 163 crore. The project would also have hiked tariffs 10 fold and cut off free supply of water to the city's poor," says Kejriwal.

In February 2002, Parivartan started a campaign against large-scale theft of foodgrains in ration shops; using the RTI applications, it found that more than 90 per cent of foodgrains in about 25 shops it examined was being siphoned off by licensed dealers.

The campaign, which resulted in violent attacks on Kejriwal and his team (including one in which dealers slit the throat of Santosh, a young female activist; she survived the attack) compelled the Delhi government to allow public scrutiny of ration records. Parivartan also got the courts to require private schools, which had received public land at concessionary prices, to admit more than 700 poor kids without fee. 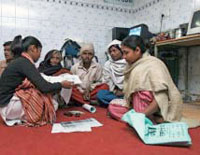 Kejriwal founded Parivartan in 2000
Parivartan has been using in its work the instruments of 'social audits' (people comparing details of the works carried out by a government department with field reality), public hearings (publicly discussing the information contained in official records and allowing people to testify before everyone) and Satyagraha (calling for justice or certain specific demands to be met in a Gandhian manner).

Meanwhile, Kejriwal has been lending his understanding of RTI and issues of clean governance to other civil society organisations, preferring to work in a networking and consulting mode with other NGOs. "We will support any public cause or movement that seeks to fight corruption and make the system tilt towards accountability and transparency," says Kejriwal.

It's not an easy job, but someone's got to do it. And fortunately for India, the one doing it is a man called Arvind Kejriwal.