Keeping NPAs in check is religion here, but so is giving genuine defaulters a chance. 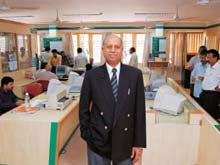 J.M. Garg
J.M. Garg is barely a month old in his new job as Chairman and Managing Director of Corporation Bank. But he has all the critical figures at his fingertips and has kept a list of assets under vigil. He has classified loans as A1, A2 and A3. The first set poses no problem, but A2 and A3 are loans where installments are due beyond 30 and 60 days, respectively. The recovery is regularly monitored, and Garg personally keeps tabs on cases where the amount due exceeds Rs 50 lakh.

Fifty-eight-year-old Garg, a postgraduate in physics and a career banker, is happy to steer a public sector bank “with a private sector outlook,’’ as he describes it. Formerly Executive Director at Punjab National Bank (PNB), Garg is keen to replicate some of its best practices.

On its own, the bank ended the last financial year quite well, with a net NPA of 0.32 per cent, which has earned it the top rank in this year’s Business Today-KPMG Best Banks study in the Quality of Assets category. As with others, the last six months have been difficult for the bank whose NPA has shot up to 0.40 per cent during April-September. Garg is firm about reversing the trend, but is not using an iron hand in all cases of default.

Click here to Enlarge
“We will sell the assets of wilful defaulters and recover our dues. But in genuine cases, for instance, businesses that are facing a rough patch, we help them by rephasing or restructuring the loan. This is practical banking. My bank will survive only when they survive.’’ Garg has told his staff that every month their recovery must be higher than slippage; they must also carefully vet new loan proposals to ensure they don’t turn bad. If they do, recovery by sale of assets is not a wise idea in a falling market.

Garg believes a bank derives its real strength from three critical metrics: Sound capital adequacy ratio (CAR), high current account and savings account (CASA) deposits and low NPA. His short-term goal is to increase CASA from 25 per cent at present to 30 per cent and then to raise the bar to 35 per cent over the next two years.

The bank plans to expand its footprint in viable and unrepresented areas and step up its share of low-cost funds. “Slowdown is a good time to open new branches. Sixty per cent of Indians are underbanked and 70 per cent of the population is below the age of 35. The India growth story is a long one, and banks can reap demographic dividend,’’ he adds.

Garg is looking at scaling up bank’s CAR from 11.75 per cent at present, and will also raise Tier-II capital of about Rs 1,200 crore this fiscal. The man has identified gaps, has simple targets in mind, and looks determined to meet them.