A badly needed shot in the arm

Health insurance that empowers the insured is the need of the day.

Nitya Varadarajan
Trawl the web for information on health insurance in the United States and perhaps the first statistic that will hit you is that a 'record' 50.7 million Americans were uninsured in 2009. 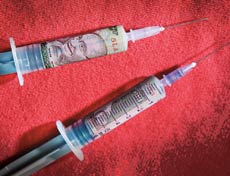 However, as per that data from the US Census Bureau, this constitutes just 16.7 per cent of the population. Then, Michael Moore's 2007 documentary Sicko highlights the apparent flaw in the US healthcare system - that insurers get rich as do drug makers, even as the common Joes and Janes get shortchanged. In India, the problem is of a different kind: of underpenetration and not so much insurance fraud and red tape. Only some 2.8 million policies were issued to individuals along with another half a million floater policies (where the sum insured can be shared by family members) in 2009. The figures are as per data filed by thirdparty administrators, or TPAs, which are organisations that process insurance claims.

Not just that. In 2009 only 1.7 per cent of hospital admissions were reimbursed with the average reimbursement amount a mere Rs 258 or 4 per cent of the average hospitalisation cost of Rs 6,225. According to R. Krishnamurthy, Managing Director at consulting firm Towers Watson, which has put together the above statistics, the need of the hour is pureplay health insurance companies.

The good news, however, is that coverage is widening slowly but surely courtesy of the universal health insurance scheme which has been launched by several state governments since 2008.

Inflation in medical treatment costs is not a huge issue in India, although overcharging does happen. There are some signs of control with some insurers streamlining claim management procedures with their in-house doctors or with active collaboration between TPAs and insurers. Recently some public general insurers blacklisted certain hospitals that were suspected of overcharging. But as Kimsoon Chua, Chief Operating Officer of Bharti Axa General Insurance, says: "Today, demand for health care far exceeds supply. Hospitals do tell us that they can do without us (insurers).''

Regulating hospitals to ensure that they provide amenities that justify their charges can help in lowering costs. Chua talks of the Malaysian model where government and private hospitals co-exist. "This drives efficiency in the private sector,'' adds Chua. That's an ideal scenario, but in India, where the bulk of the population barely earns enough to make ends meet, public health financing will be a more viable option to private insurance for some time to come.