The Wall Street bug has spread far and wide, taking its toll on markets all over the globe. Back home, however, many of the US investment banks are in no mood to call it a day.

Rachna Monga
The Asia-Pacific region, particularly India, is one of the most attractive places for growth. There’s a lot of wealth being created in India”
John Thain, Chairman & CEO, Merrill Lynch, in Business Today in May 2008

“We have been active in advisory, and in private equity (in India), where we have invested over a billion dollars over the past year… the thing that attracts us is not the size of an economy but the growth of an economy”
Lloyd Craig Blankfein, Chairman & CEO, Goldman Sachs, in Business Today in November 2007

“Our management has told me that, in a very controlled, healthy and gradual way, they would like to significantly expand the Asian operations”
David Martin Darst, MD, Morgan Stanley, in Business Today on September 20, 2008

They came, they saw—and they expressed their faith in the India growth story, even as they took stock of the grim situation back home. Last fortnight, as Wall Street collapsed, with investment banks either going bankrupt or being gobbled up or losing their blue-blooded status, their India operations—and, indeed, those in other emerging markets—assumed even more importance. 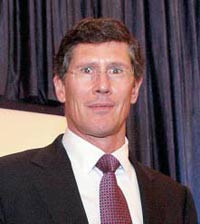 John Thain
Days after Bank of America snapped up a troubled Merrill Lynch for $50 billion, Chairman John Thain explained to analysts in a conference call how economies like India, China and Brazil will be critical in making the Bank of America-Merrill combination work. “On the investment banking, sales and trading side, over 50 per cent of our revenues come from outside the US, and we see very attractive growth opportunities in those faster-growing parts of the world. We have a very solid footprint in India; we are building our presence in Brazil; we see great opportunities in China; we have a small but growing operation in Russia; and we’re in the process of building our business in the Middle East. So, the combination here of our businesses and Bank of America’s, I think, will allow us to expand our international presence.”

David Martin Darst, Managing Director, Morgan Stanley
They’ve fallen like nine pins, but as Edward Naylor, Director of Corporate Communication, Goldman Sachs Asia LLC, puts it: “It’s business as usual for us in India.” Adds Narayan Ramachandran, Country Head & Managing Director, Morgan Stanley India: “The strategic importance of emerging markets has only increased and not gone down over the past year since the crisis in the West started. It gives any company confidence that emerging markets will remain a growth area for the long term.”

Goldman, Merrill, Morgan and Lehman have been in India for over a decade, but it’s only in the past couple of years that these banks stepped up their India presence. Goldman, for instance, till 2006 was just a minority partner in a joint venture with Uday Kotak. Now, as Chairman Lloyd Craig Blankfein had told BT: “We are unabashedly Goldman Sachs India.” Riding solo, Goldman today has operations across equity capital markets, institutional broking, private equity and is the process of setting up its asset management operations.

Ditto with Morgan Stanley, which, in 2007, had ended its joint venture with Nimesh Kampani’s JM Financial to start its own wealth management and investment banking operations. On the cards are forays into wealth management and infrastructure-focussed private equity. Merrill Lynch also reinforced its India operations lately after buying out a 50 per cent stake from its Indian partner Hemendra Kothari in 2005 (although Kothari continues to be Chairman, holds 10 per cent and the firm continues to be known as DSP Merrill Lynch). In March, Kevin Watts, a Merrill veteran, became the Indian arm’s first ever President. Lehman, which had exited India in 1999, returned two years ago, and had big plans on the advisory and capital markets fronts. Led by Tarun Jotwani, Chairman & CEO, Lehman Brothers India, it acquired the institutional broking business of BRICS Securities.

The future of Jotwani and the 2,400-odd employees at the Indian offices was uncertain at the time of writing (company officials declined to comment). Even as Barclays snapped up the US part of Lehman, and Nomura the European and Asian bits, there was little clarity on who would end up with the Indian arm. A team from Royal Bank of Scotland (which had acquired ABN Amro globally earlier this year) was said to be interviewing senior bankers of Lehman Brothers last fortnight; and an Indian firm was reportedly ready to hire them at half their salaries.

For Indian firms, clearly, this is an opportunity that doesn’t knock too often. In late-September Puneet Pratap Singh, Partner at Executive Access, an executive search firm, was busy placing two teams of Lehman Brothers with Indian as well as foreign firms.

Merrill, for its part, has taken heart that it didn’t go bust. Also, duplication between Merrill and Bank of America, which will now have investment banking too, is minimal. In India, Bank of America is small, with a deposit base of Rs 4,191 crore as on March 31, 2008. It operates through five offices and has a total strength of 314 employees.

A subsidiary, Bank of America Securities India, is engaged in the corporate fixed income business. How the integration will pan out, or whether it will play out at all, wasn’t clear at the time of writing— a DSP Merrill spokesperson told BT it was too early for clarity to emerge—but the uncertainty is taking its toll. A DSP Merrill loyalist, Andrew Holland quit the firm last fortnight along with his institutional equities team and pitched tent with Ashok Wadhwa of Ambit Corporate Finance.

Clearly, Wadhwa has been quick to seize the opportunity that has come his way. Nirmal Jain, CMD, India Infoline, a domestic financial firm, is another promoter who sees scope to grow market share across segments. That’s not because the number of competitors will reduce but because the risk-taking ability of the US banks will come down dramatically.

T.V. Raghunath, Executive Director & Head of Mergers & Acquisitions, Kotak Mahindra Capital, too, feels that with new ownership, competition will remain but sanity will return to the markets. “The riskier deals may not be funded through leverage or debt.”

He argues that it’s time Indian promoters, who are used to giving mandates to foreign banks because of their dual ability to advise and fund, change their mindset. There is an inherent conflict of interest in getting advice as well as finance for an acquisition from the same bank, feels Raghunath.

The lower risk-taking appetite of the global banks may just be what the doctor ordered for homegrown firms that are foraying into a host of highgrowth sectors of financial services. The bad news, though, is for the Indian equity market, which is heavily dependent on inflows from foreign institutional investors (FIIs)— who have sold Indian equities worth $1.5 billion (Rs 6,900 crore) in September and a whopping $8.6 billion (Rs 39,560 crore) since beginning of the year.

Merrill, for instance, had investments of over 1 per cent in 128 listed companies as of end-June 2008; Morgan had investments in 135 such companies. Clearly, investors will have to continue to contend with volatility in the short to medium term. For the US banks themselves, as well as for their Indian counterparts, however, there couldn’t be a better time to step on the gas in the country. Read about all the frenetic action in the following story.