Hindustan Copper is a debt-free company

Shakeel Ahmed, chairman and managing director, Hindustan Copper
Somnath Dasgupta
Copper prices had melted, the new Central government was gung-ho about selling government-owned industrial undertakings, and unions were fighting a rearguard action. The word was out: Kolkata-based Hindustan Copper was to be sold.

The company had made profits up to 1996, but a bloated workforce, lack of economies of scale, and low metal prices had pushed it into the red. For the Bharatiya Janata Party-led National Democratic Alliance government, the company was a potential candidate for sale.

Then came a Supreme Court ruling in another case: a company nationalised by an Act of Parliament cannot be sold by administrative fiat. Someone remembered that the Ghatsila unit in Jharkhand, earlier the Indian Copper Complex, had been nationalised by an Act of Parliament in 1972. Besides, a new government replaced the BJP and scrapped the plan to privatise Hindustan Copper.

Shakeel Ahmed, who took over as chairman and managing director in October 2009, knows the company's woes well: surplus labour, locational disadvantages poor economies of scale, and low copper prices. He has a blueprint for success. "Our new focus is on mining, not smelting," he says.

Ahmed, who belongs to the Indian Railway Service Mechanical Engineering cadre, inherited a leaner organisation. At one time, Hindustan Copper had more than 26,000 employees, spread across the Ghatsila complex in Jharkhand, the Malanjkhand project in Madhya Pradesh, the now-closed Khetri complex in Rajasthan, and Taloja in Maharashtra. Now it has 6,000. The last voluntary retirement scheme was implemented in 2006. 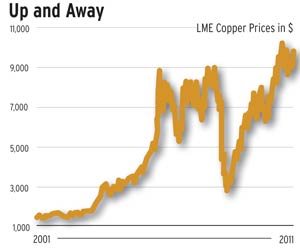 Making copper, as Ahmed explains, is an enormously wasteful process. The copper content of Indian ore is one per cent. Even so, it is higher than the world average, as mining companies elsewhere have exhausted richer ore. The ore is treated to increase the copper concentration to 25 per cent, smelted to increase it to 90 per cent, and refined to raise it further to 99.99 per cent. But costs are high, and margins low, for smelting and refining. Privatesector majors such as the AV Birla group and Sterlite make money by smelting and refining imported ore at plants near the coast.

Hindustan Copper itself often has its ore processed by these companies. "Smelters are viable above capacities of one million tonnes," says Ahmed. Hindustan Copper can smelt just 50,000 tonnes a year, compared to five million tonnes at the Birla plant at Dahej, and four million at Sterlite's Tuticorin facility. "Smelting costs $80-100 per tonne, while copper sells for $9,650 per tonne," says Ahmed. "So 95 per cent of the value is in mining."

In 2002/03, when privatisation was in full swing, bureaucrats in Delhi ordered shafts at Rakha mines in the Ghatsila complex - one of the country's largest copper deposits - to be plugged with concrete. This is usually done only for mines that are exhausted. Today, the management is trying to reopen the shafts. At current prices, it makes sense.

To raise funds, the company has been planning to get 10 per cent fresh equity from the government, and offload 10 per cent in the market. "Now the thinking is, we may not go in for fresh equity, only divestment," says Ahmed. "But a final decision has not been taken." There will be no full sale though, he adds. Hindustan Copper is a debt-free company, with cash reserves of more than Rs 400 crore.