Supplying clean drinking water to the masses can be a profitable and scalable business. Sarvajal and Waterlife show how.

Sudesh Menon heads Waterlife <em>Photo: A . Prabhakar Rao</em>
For the past year and a half, Saurabh Jindal, a marble and tile seller in Sangaria town of northern Rajasthan, has been buying 30 litres of drinking water every day for his home, and an equal amount for his shop. How much does he pay for those 60 litres? Rs 30. It would cost even less, just Rs 18, or Rs 0.33 per litre, if he did not get the water delivered to his doorstep. "I don't mind paying this small amount for clean water," he says. "It is far less than what it would cost me if someone in the family fell ill from drinking tap or well water."

How does he get clean water so cheap? It comes from a private company called Piramal Water Pvt Ltd which, under the brand Sarvajal, supplies drinking water in 154 cities, towns and villages across Rajasthan, Gujarat, Uttar Pradesh, Madhya Pradesh, Haryana, Delhi and Maharashtra. Another private company providing a similar service is Waterlife India Pvt Ltd, whose purified water sells in eight states at Rs 5 for 20 litres, or 25 paise per litre.

Clean water for all is one of the country's most urgent needs. Industry estimates maintain that around 720 million of India's 1.25 billion population still lack access to it. Diseases such as diarrhoea, caused by water unfit for drinking, still claim thousands of lives annually. No doubt in recent times there has been a concerted effort to address the problem, with around 2,500 community water projects being set up, which cover nearly nine million people across 5,000 villages. But a great deal remains to be done. Besides, the majority of community water projects is state-funded and remains partly or wholly subsidised. In contrast, Piramal Water and Waterlife seek to make clean water for the masses a self-sustaining business proposition. 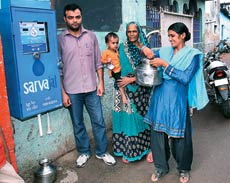 A Sarvajal water ATM in an Ahmedabad slum. There are 17 of these in four states: Photo: Shailesh Raval
Sarvajal was started by the Ajay G. Piramal Foundation, the corporate social responsibility arm of the Piramal group, in August 2008 as a charitable initiative in the Piramals' native village of Bagar in the Jhunjhunu district of Rajasthan. But it soon became a regular business venture when its founders realised people were ready to pay for safe drinking water. "If people are willing to pay, we thought there should be a business model for it," says Anand Shah, who heads the project.

To achieve scale, he decided to appoint franchisees, to whom Piramal Water supplied water purifiers. So far 154 franchisees have been appointed across the sevenstates, who pay Rs 50,000 as initial charges and thereafter share 40 per cent of their revenue with Sarvajal. While unwilling to discuss financials, Shah maintains the business will turn profitable in two years. The water undergoes reverse osmosis and ultraviolet treatment before it is supplied. Piramal Water and its franchisees typically do not use the ozonisation process for purifying water that big companies do. The ozonisation process as well as some other purification methods, along with advertising and distribution expenses, are among the reasons why big companies sell bottled water at a much higher price.

9 million people in 5,000 villages are served by community water projects"

Sarvajal has also installed 17 'water ATMs' (automated teller machines) in Gujarat, Rajasthan, Maharashtra and Delhi. Customers can buy prepaid water cards and use these at the ATMs.

Waterlife was the brainchild of three idealistic young men, Sudesh Menon, Mohan Ranbaore and Indranil Das, who quit jobs with multinational companies to set it up in January 2009. "We realised that most community water projects are unsuccessful because very little is spent on operating and maintaining the purification plants," says Menon, its CEO. "There is no revenue stream to meet operation and maintenance expenses." Thus Waterlife embarked on a public-private-partnership model which was unique at the time: the three men persuaded state governments to let them maintain the water purification plants the states were setting up, charging a user fee from customers for doing so. Currently, Waterlife runs 2,000 such plants of all sizes. Menon claims the company is growing at nearly 300 per cent per year.

Since then a number of other state governments have replicated the Waterlife model, getting private companies to ensure their purification plants remain functional. Waterlife was also one of 15 companies from 10 countries which won the G20 Challenge on Inclusive Business Innovation Award in June this year. "We are highly flexible," says Menon. "In Uttar Pradesh, for instance, we are even working with individual hand pumps. We have attached fluoride and arsenic removal units to about 500 hand pumps to combat the fluoride and arsenic poisoning problem in some parts of the state."

Waterlife also generates considerable indirect employment. "The challenge in inclusive growth is to increase the size of a rural consumer's wallet with higher earnings or by reducing costs, rather than just get a share of the wallet," says Rajiv Narang, Chairman and MD of Bangalore-based innovation advisory firm Erehwon Consulting. Waterlife does just that. Amit Kha from Kolkata, for instance, was previously unemployed, while Paritosh Mahato, also from Kolkata, ran a grocery store which earned him very little. Today both are Waterlife's 'distributors' - they buy 20-litre water cans for Rs 5 from a Waterlife plant and supply them daily over a radius of 20 to 30 km. Naturally they charge a little more, Rs 7 to Rs 8, in the process earning around Rs 6,000 a month.
TATA'S OTHER NANO

Tata Swach water purifier
With the commercial launch of the Nano minicar in March 2009, which then cost just Rs 1.2 lakh at dealerships, Tata Group Chairman Ratan Tata realised his dream of bringing cars within the reach of consumers who could not have afforded them before. He took another step in the same direction, of tying affordability to innovation, when he unveiled the water purifier Tata Swach nine months later. Developed by Tata Chemicals with help from Tata Consultancy Services (TCS), Titan Industries and other Tata Group companies, Tata Swach came in two variants, priced at Rs 749 and Rs 999, at a time when most other purifiers cost more than Rs 2,000. Currently, these two Swach variants cost Rs 899 and Rs 1199, respectively.

When it wa s launched in December 2009, Tata Chemicals spokespersons said the company had earmarked an investment of Rs 100 crore over five years for producing, developing and launching more water purifiers.

To distribute Swach, Tata Chemicals has also tapped into the vast Tata network across the globe. For instance, TCS distributed 2,000 Swach purifiers as part of its relief efforts in Chile after the earthquake there in February 2010.

"Innovations that affect people at the bottom of the pyramid are no longer restricted to start-ups," says Rajiv Narang, Chairman and Managing Director of Bangalore-based innovation advisory firm Erehwon Consulting. "Even big corporate houses are increasingly active in that space as they want to go beyond corporate social responsibility initiatives and because it's profitable as well," he says.

The launch of Tata Swach soon prodded other companies to follow suit and launch water purifiers in a similar price range. The household purifier market is worth Rs 1,500 crore, with many unorganised players.