Hand in Hand is creating entrepreneurs in war-torn Afghanistan

Hand in Hand is overcoming ideological hurdles to create entrepreneurs in war-torn Afghanistan.

Hand in Hand beneficiaries near the Blue Mosque in Mazar-i-Sharif, Afghanistan
N. Madhavan
The 64 mullahs who congregate every Wednesday at the Blue Mosque in Mazar-i-Sharif, northern Afghanistan, had probably never seen a more persistent soul in their lives. This person had been hounding them for an audience for two months. It was mid-2007, and around the time the Taliban seemed to be gaining ground. That year alone, the number of suicide attacks was over 140 - more than the previous five years together. But the deteriorating safety situation was not why the mullahs hesitated to grant an audience. The reasons were that she was a non-Muslim and a woman. Finally she succeeded in meeting them - the first victory for Usha Somasundaram of Hand in Hand, a non-governmental organisation based in Tamil Nadu which works to alleviate poverty.

Usha Somasundaram's efforts to kick-start Hand in Hand's operations in the relatively peaceful Mazar-i-Sharif, Afghanistan's fourth largest city, met with resistance. "All I was hearing is that women can't come out of the house," she says. "They cannot form groups, and levying interest is un-Islamic." 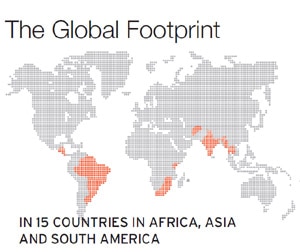 However, a survey of 200 households in Mazar-i-Sharif revealed that people were enthusiastic about what Hand in Hand proposed to do. Somasundaram reckoned that the blessings of local religious leaders would make things much easier, so she wanted to meet and explain Hand in Hand's work to them. She even hired a cleric to understand the Koran's teachings, so that she could make a strong case that her work was not un-Islamic. It paid off: she managed to persuade the mullahs. Later, on a popular TV chat show, a viewer asked one of the clerics whether she could work with Hand in Hand, and he encouraged her to do so. The impact of the programme was immediate, as women's participation increased.

Hand in Hand has created over 13,000 entrepreneurs in Afghanistan, who are involved in weaving, embroidery and agriculture. It has tweaked its model and replaced interest with profit-sharing, which is in line with Islamic banking. It crossed hurdles peculiar to Afghanistan. For instance, Afghan women, used to grants, initially had trouble understanding why they should return the loan. Their poor education also meant that they needed extensive training.

Hand in Hand's success in Afghanistan is due in part to its India business model. Conceived and promoted by Percy Barnevik, former chairman of power and automation giant ABB, at the beginning of this century, Hand in Hand aimed to reduce poverty by creating entrepreneurs. It does not just give money to people but also trains them to do business. "We first inculcate the savings habit, give them adequate training, and only then give them the money," says Kalpana Sankar, Managing Trustee, Hand in Hand India. "That way the money is deployed effectively and used for the right purpose." The NGO also helps entrepreneurs get bank funds.

1.3 mn The number of jobs Hand in Hand has helped create in India in the last nine years

The NGO has also been active in South America (Brazil, Costa Rica, El Salvador, Guatemala, Honduras and Nicaragua) and Africa (Kenya, Lesotho, South Africa, Swaziland and Zimbabwe). It recently ventured into Cambodia and Myanmar. "In each country, we have faced different challenges, and mostly they are cultural," says Sankar. "Brazil is a credit card-driven society and people borrow at interest rates higher than 48 per cent. Inculcating the savings habit in them was a challenge. South Africa has a subsidy culture and poor people there are least entrepreneurial."

Somasundaram is back in India after handing over operations to locals. She spent almost three years in Afghanistan, living in a 10 x 10 room with no TV and venturing out only when security conditions permitted. She has since left Hand in Hand. The reward for the organisation has been tremendous: based on its model, the Afghan government launched the Afghanistan Rural Enterprise Development Programme in 2010.