Although a few Indian banks did burn their fingers in their overseas forays, there’s still a sea of opportunity on foreign soil. There are, of course, risks, too.

Sonjoy Chatterjee
A month after the sudden collapse of the 158-year-old investment bank Lehman Brothers in September, HDFC Bank, India’s second-largest private sector bank, set foot overseas by opening a full-fledged commercial branch in Bahrain. Indeed, there are already dozens of Indian banks with branches in Bahrain’s financial district, all trying to get a piece of the remmitances pie. The remarkable bit about HDFC Bank putting up an outpost there is that a bank that’s considered one of the more conservative ones was willing to make the move soon after the bloodbath on Wall Street.

Then again, the remittances market is far removed from the disastrous subprime mortgages that eventually brought down the blueblooded I-banks. It’s less risky, for sure. And it’s also a humongous pie, estimated at $42 billion (Rs 2.1 lakh crore), far larger than the annual FDI and FII that India attracts. 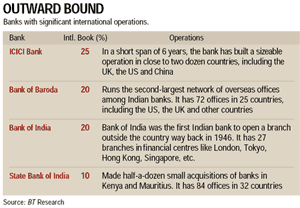 Click here to Enlarge
So, whilst ICICI Bank has been at the centre of a storm for its exposure to Lehman Brothers (an insignificant one, the bank claims), fact that it is a leader in the remittances space has been forgotten. “Our bank enjoys a dominant 25 per cent market share in the remittances market,” says Sonjoy Chatterjee, Executive Director (International), ICICI Bank. The bank’s core proposition has been product innovations, which revolve around creating layers of interfaces with the remittances business. The Internet, for example, is one of those interfaces. Yet, remittances is just one prong of Indian banks’ international strategy. The other prongs include tapping opportunities in M&As (like advising Indian promoters looking for international buyouts), trade and also syndication of equity and loans (see Prospects Galore). Other than HDFC Bank and ICICI Bank, a number of other Indian banks, including public sector banks like Bank of Baroda, Bank of India and State Bank of India, have built a large asset base abroad.

In the BT-KPMG Best Banks study, ICICI Bank has emerged as the top global Indian bank. In a short span of six years, the bank has managed to build a sizeable international operation, with the overseas portfolio comprising 25 per cent of its total assets. Starting with remittances, ICICI Bank has expanded into corporate and advisory services and is also attracting retail deposits. ICICI Bank has been successful in garnering retail deposits from the resident population in the UK and Canada over the last three years. Today, it has a deposit base of $9.5 billion (Rs 47,500 crore) in the UK and Canada and all other Indian banks put together in these two countries are estimated to have some $14 billion (Rs 70,000 crore) deposits. “Indian banks present overseas are aggressive on wholesale deposits whereas lowcost retail deposits are still to be tapped,” says a banking analyst. Click here to Enlarge
Many banks are realising the advantage of a strong retail franchise to fund the overseas corporate business with low-cost deposits. ICICI Bank’s UK subsidiary has taken a lead on the liabilities side of the business. “To facilitate our ability to underwrite the funding required by Indian corporates for their global acquisitions, we had set up a syndication desk in London and Singapore. This was a key factor for our ability to support Indian transactions in international markets,” says Chatterjee. Adds M.V. Nair, Chairman & Managing Director, Union Bank of India: “We are re-looking at our strategy based on the current turmoil and also our experience in the past.” The bank may possibly look to target lowcost retail deposits. In the past, many public sector banks expanded overseas more as a necessity to support their corporate relationships (buyer’s credit, seller’s credit) than to actually scale up their international presence. Of late, these very banks are looking for new markets. “There is a tremendous business opportunity. There are countries that need banking services with better technology, like the African countries,” says Nair. 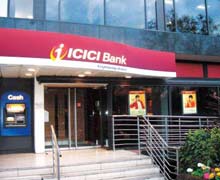 ICICI Bank
There is also an untapped opportunity in the guise of acquisitions— overseas banks with a strong franchise are on the radar of many Indian banks, what with valuations having come down drastically in the last six months. SBI has made a few acquisitions of overseas banks in the recent past. However, in today’s scenario where liquidity is scarce, M&A may not be the way to go. Says Chatterjee: “Although there are opportunities for M&A, given the prevailing market situation, the most important task for any bank is to conserve capital. Moreover, we have been successful in building a strong international banking platform the organic way.”

Still, it isn’t as if foraying overseas isn’t risky. Along with ICICI Bank, others to burn their fingers, courtesy their exposure to Lehman, include Bank of India and Bank of Baroda. Such mishaps will not—and should not—deter Indian banks from going abroad. Rather, they’ve learnt some valuable lessons on what not to do in overseas markets. For instance, there’s hardly a bank that invests in overseas paper for the short or medium term. That market may take a few years to revive in the wake of the subprime crisis that broke out last September.