“The global crisis has showed us that financial stability is vulnerable”

It has been 50 action-packed days on Mint Street for D. Subbarao, the 22nd Governor of the Reserve Bank of India (RBI). If he’s feeling the heat, the 59-year-old isn’t showing it. If there’s anything bothering him, it’s the lack of fresh air in his 18th floor corner room at RBI headquarters. Subbarao, who had earlier worked as Finance Secretary in the Ministry of Finance, met Business Today’s Anand Adhikari, a day after announcing the mid-term monetary policy review. Excerpts from an interview: 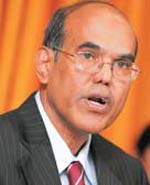 D. Subbarao
On financial sector turmoil impacting the real economy
Some impact is being transmitted already into India’s real economy. It’s too early to say whether we have seen all of it or more will develop. It’s an uncertain situation.

We have given special accommodation in respect of SLR (statutory liquidity ratio) exclusively for the purpose of banks to access money to support mutual funds.

On the reluctance of banks to reciprocate the cut in the shortterm repo rate
We don’t tell the banks what to do. We only signal. The banks make their own judgments. We had a very extensive meeting with bankers yesterday to address their concerns and also let them understand our concerns. We have basically tried to give two messages. First, that credit should keep flowing to productive sectors and that bankers must keep vigil on credit quality. At our end, we will do whatever is necessary to keep the liquidity flowing. We are open to their concerns.

On bankers’ major concerns
Their concerns are about pressures on corporate profitability, forex liquidity and also additional demand for credit because of the substitution effect.

On inflation peaking
Certainly, in the mathematical sense, it has come down. I hope that this downward trend will continue and we will reach our target of 7 per cent by March 2009.