Karnataka Bank is innovating in product delivery in rural and semi-rural areas. Ananthakrishna
Few banks that are present mostly in rural and semirural areas can make the same claim to technological leadership as Karnataka Bank. It went for a core banking solution (CBS) at the cusp of the millennium, months or years before the big Indian banks discovered the virtues of CBS.

“We are glad we are the mosttechnology-driven bank,’’ says Ananthakrishna, Chairman & CEO of the 84-year-old private sector bank. Founded and headquartered in Mangalore, Karnataka Bank likes experimenting. So, when it introduced a debit card two years ago, there was more to it than the name suggested: it also doubled as a credit card. The customer enjoyed the best of both worlds.

During the eight years that Ananthakrishna has been at the helm, there has been a sharp uptrend in productivity. The number of employees per branch has come down from 12 to 10, and business per employee has risen from Rs 2 crore to Rs 6 crore. 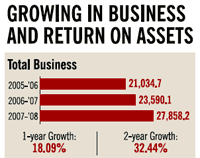 Click here to Enlarge
No wonder that the Business Today-KPMG’s annual survey recognises Karnataka Bank for its performance in productivity and efficiency. “We dispense with manpower where technology can do, and send our people into the field to get business,’’ says the Chairman, who is associated with the bank since 1971, when he joined as an officer.

The veteran banker is restless about the still-high non-performing assets, but is happy with the milestones crossed over the years: the net NPA has come down from 6 per cent at the time Ananthakrishna took over to 1.22 per cent at the end of September 2008. “Our target is to bring it down to less than 0.5 per cent by March 2010.’’ At 0.98 per cent at the end of March 2008, Karnataka Bank’s net NPA was below the private sector average. Its return on assets (RoA) also, at 1.37 per cent, was higher than the private sector average. The bank hopes to end the year with a business of Rs 35,000 crore.

Ananthakrishna’s next big challenge is to get low-cost funds—not an easy task in a place like Mangalore where people are always looking for higher rates of return. “We are doing everything possible to improve our CASA (current account, savings account) deposits,’’ says Ananthakrishna. His peers say that Ananthakrishna can be trusted to achieve his target.