With their traditional business of lending fraught with risk, banks are looking to beef up non-interest income by hawking third-party products like mutual funds and insurance.

Five years ago, virtually every banker and his uncle was convinced that retail lending was the future of Indian banking. Today, it’s a slightly different story. Retail lending has suddenly turned riskier, with swelling non-performing assets and low margins scaring bankers away. Traditional corporate lending, much of which goes to small and medium enterprises (SMEs), is also fraught with danger in these challenging times when prices of steel, aluminium and cement are coming crashing down. 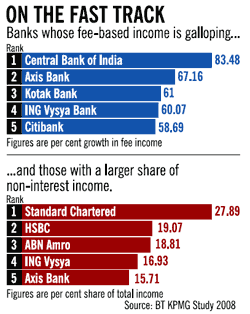 So, is there a life beyond credit for bankers? Yes, in the non-interest segment. Indeed, a clutch of banks has already taken big strides in the non-interest income space. The foreign banks, including Standard Chartered Bank, HSBC, ABN AMRO (now RBS) and Citibank, are the larger players in this segment, thanks to their corporate fee-based business. That these multinationals tend to be more successful in this space is largely because of their customer-centric approach, superior use of technology, an international network and a far varied product basket. Of late, fee-based products, or products that generate noninterest income, are attracting the attention of more and more banks, including the private ones as well as the state-owned monoliths. For three very good reasons: One, they don’t require much capital; two, they carry little risk; and, three, for good measure, they can also boost profitability.

Today, for the top foreign banks, 20-30 per cent of their total income is of the non-interest variety. And that may not be unusually high. Globally, there are banks where the non-interest income takes care of the entire wage bill. Little wonder then that the focus on fee-based products has sharpened back home. 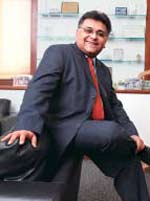 The state-owned banks, for their part, are proving to be fast learners. Their advantage is their huge customer base, and their network that spans every nook and corner of the country. These public sector banks, which control two-thirds of the country’s banking sector, have a huge customer base to tap for highend advisory services; what they lack, perhaps, is the sophistication in handling such clients and also an extensive product range.

The public sector banks (PSBs) are determined to give their foreign counterparts a run for their money in this business. For example, Union Bank of India recently sent a 25-people batch to IIM Bangalore to upgrade their skills in advisory services. “We have existing good relationships and we want to build on those relationships,” says M.V. Nair, Chairman & Managing Director, Union Bank of India. “They (the 25 sent to IIM-B) will be pressed into action to deal with sophisticated high net worth customers,” adds Nair.

Bank of India is another PSB that’s trying hard to tap into fee-based income. T.S. Narayanasami, Chairman & Managing Director, Bank of India, is giving the finishing touches to a pamphlet that he plans to send to all its customers where details of all the product offerings would be explained. 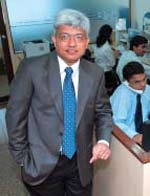 Nipun Mehta
The trick, of course, is to diversify the non-interest income stream so as to be in a position to reduce the risk associated with any one of them. Behl of HSBC says his bank has been able to diversify its income stream to avoid overreliance on any one area. “Our fee income emanates from remittances, wealth management, lockers and other services. In fact, within each business we have multiple products that do well under different market situations; this offers another level of risk mitigation,” adds Behl.

Nor is it wise not to get too caught up by the allure of noninterest income. Disbursement of credit is, after all, a bank’s primary task—and in one of the fastest economies of the world, that task can be amply rewarding as well. Those banks that can balance themselves comfortably between interest and non-interest income will be the ones that will figure amongst India’s top banks in the years ahead.