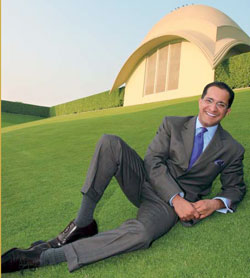 Vikram Oberoi
Waiting at the lobby of Oberoi Group’s Trident Hotel in Gurgaon, I am a bit anxious. Vikram Oberoi, the third generation scion of India’s best-known luxury hospitality chain, is expected here this afternoon for a photo shoot, and it’s the first time I will be meeting him face to face. What makes me anxious is the fact that he’s expecting my photographer colleague, and not so much me.

Over the last 10 days, I’ve been hounding him for a meeting and he has resolutely declined one. ‘Profile my group, not me,” he’s conveyed to this magazine through his head of public relations. Oberoi is supposed to arrive here at quarter to four for the shoot, but it seems he’s a bit behind schedule. Around 4 o’ clock, his silver Porsche pulls into the hotel porch, and a dapper Oberoi, dressed in an impeccably cut grey suit, a royal blue tie and a matching pocket square, appears.

As soon as he gets off the car, he starts chatting with his staff and greeting guests (most of whom, strangely enough, seem to know him). As soon as I get his attention, I ask him my first question: Why doesn’t he want to be profiled? I am not important, but the group is, he offers. Besides, he’s had a nasty experience with a leading English daily, whose Bangalore reporter has misquoted him and caused a lot of trouble for the group. Hence, media for some time. If you are a reporter on a deadline, that’s an infuriating logic. But, then, it’s impossible to get mad at someone who’s so earnest and, ahem, so boyishly good looking, never mind that he’s 44. As we head for the location of our shoot, I discover precisely why Oberoi, son of P.R.S. Oberoi and grandson of Rai Bahadur M. S. Oberoi, means business. Outside near the entrance he spots a carelessly thrown cigarette butt; instead of signalling to one of the three hotel executives (F&B manager and two staffers) who are tailing him, he stops, picks up the butt and throws it into the nearest dust bin. You don’t have to do that when you are the owner or manager of 32 hotels and luxury cruisers across five countries under the ‘Oberoi Hotels & Resorts’ and ‘Trident Hilton’ brands. But, then again, perhaps you need to.

It’s this attention to detail and the willingness to get hands dirty that makes Oberoi the most successful purveyor of luxury hospitality in the country. Over the 10 years, when he stepped into a mainstream management role as General Manager of The Oberoi Rajvilas in Jaipur, Oberoi has relentlessly focussed on quality and succeeded. Take Rajvilas, where he cut his teeth in terms of management. A decade ago, when his father put him in charge of the property, many people considered the upscale palace-turned-hotel a white elephant and predicted its doom even before it opened for business. Today, Rajvilas is the cynosure of not just the Oberoi Group, but the hospitality world.The resort has won awards every year since it opened in December 1997 (including Tatler’s ‘Hotel of the Year’, Gourmet’s “Most Exotic Resort in the World’, and the Senses and Wellness Award for Best Spa).

The readers of Condé Nast Traveler have ranked the Rajvilas as first among the preferred leisure hotels in Asia and the Indian subcontinent, ahead of The Datai, Langkawi, Thailand; The Oriental, Bangkok; Raffles Hotel, Singapore; and The Peninsula in Hong Kong and Singapore.Rajvilas isn’t the only property from the Oberoi stable that has been winning awards and accolades. Other group hotels and resorts are almost a regular feature in Condé Nast Traveler, Asiamoney, Business Travel Poll, Zagat Survey, Travel+Leisure, Forbes Traveler 400 and many more publications. So, what is the single biggest factor contributing towards the group’s success? “I feel it is the fact that all of us work towards a common objective of making the guest’s experience truly memorable,” says Oberoi.

Understandably, therefore, the man who’s helped put India on the world luxury map isn’t thinking quantity. Indeed, he doesn’t even think the group is in the business of boarding and lodging so to say. The business of luxury hospitality, he says, “is less about cost and more about value, less about extravagance and more about the experience.” Ergo, Oberoi’s motto for the group “We don’t want to be the biggest, we want to be the best” is something he has inherited from his father and grandfather, and something that he truly believes in. “Our goal is not to expand but to constantly improve the quality,” he says. That, however, doesn’t mean that the group, which boasts of 91 per cent occupancy rate through the year, isn’t ambitious. On the contrary, the heir to the hospitality empire has ambitious plans of taking the Oberoi name to key international markets. But more of that later.

While both P.R.S. “Bikki” Oberoi and his son Vikram are fanatical about details and, hence, the ‘Oberoi experience’, the way they were groomed for this couldn’t have been more different. P.R.S. was pampered by his father and encouraged to “not work” and “see the best hotels by actually staying in them”. Consequently, he remained an experiential traveller till he was 32. He travelled to cities like London, Paris, New York and Rome. He stayed at the best hotels, ate at the best restaurants and drank the finest wines. In fact, his father, Mohan Singh Oberoi, wanted him to enjoy and experience the luxuries as a customer, so that they could be successfully implemented in their own properties. P.R.S. also did a Master’s course in Haute Cuisine at Lausanne. He was groomed to be in the business from the start.

The training was a bit different for Oberoi Jr. He worked during summer holidays at the hotels before he completed his Economics degree from Pepperdine University in California. After his graduation, he dabbled in the stock markets as a broker at ANZ McCaughan in Australia, before coming back to train full time in the hotel chain in 1991. And employees at the various hotels where he has worked remember him as someone who has gone through the drill in all the divisions of the hospitality chain, be it the travel desk, reception or even housekeeping, to get a first-hand experience of all the nuances of the business. While P.R.S. is known for his flamboyant style (even today), guests and employees can’t talk enough about his son’s humility. “There is nothing that he will ask anyone to do which he would not do himself,” says Visheshwar Raj Singh, General Manager, The Trident, Bandra Kurla, Mumbai (scheduled to open in 2008), who’s worked directly under Oberoi. “He is a beneficiary of a fantastic inheritance. Vikram is genetically endowed to carry out the legacy of his father and his grandfather,” says Ashwini Kakkar, Executive Vice Chairman, Mercury Travels.

Building on the legacy

Oberoi’s big challenge then is to take a sterling legacy and build on it. The group already has a presence in Mauritius, Egypt, Indonesia and Saudi Arabia, besides India. In the next few years it will open hotels in Dubai, Maldives, Abu Dhabi, Oman, Marrakech and Bhutan. “We feel that we have built a luxury brand that we must expand worldwide,” explains Oberoi, while pointing out that the group has more than 15 projects under planning and development in India and abroad. “It’s a group with some exceptional offerings and it’s a brand that is still looked up to for its very high standards,” says Ajay Bakaya, Executive Director, Sarovar Group.

But do the increased competition and entrance and expansion of international chains in India like Four Seasons, Mandarin, Ritz Carlton give Oberoi sleepness nights? “The key to success is to be able to anticipate these changes and have the ability to meet new expectations in as short a time as possible, without compromising the brand and the values that form the foundation of our business,” he says. Besides, as Ravi Boothalingam, a former Oberoi Group President until 2001, points out: “This is not the first country that Oberoi Group will be competing with international players for leadership position.” On the contrary, Patu Keswani, Chairman & MD of Lemon Tree Hotels and a former Indian Hotels (Taj Group) CFO says: “In an already established market like India, someone like Four Seasons will have a tough time and not the Oberoi Group.”

Just the same Oberoi is taking no chances. You never know which guest may take offence at a stray cigarette butt and take her business elsewhere.