Shweta Punj
It takes originality and a strong will for a woman to first study brewing, and then to turn to a nascent industry when hurdles in the brewery business prove insurmountable. Kiran Mazumdar-Shaw, Chairman and Managing Director of Biocon, India's first biotechnology company (it was set up in 1978) has plenty of both. As someone who made unconventional choices - brewmaster, biotechnology pioneer, to personal life choices (she married at 44) - she says she admires people who dare to do things differently.

Her confidence, and her conviction in her idea at a time when the biotechnology industry barely existed, impressed Narayanan Vaghul, former chairman of ICICI Bank and founder of ICICI Ventures, at their first meeting. "It was difficult to not to place faith in her... she walked into my room, we spent half an hour talking, and I could see she had fire in her belly." Mazumdar-Shaw, for her part, says Vaghul funded a technology that proved crucial for her business. "When I wanted to scale up our technology, I could not find anyone in India," she says. "There was no venture funding. No bank wanted to touch it. Nobody wanted to fund a home-grown technology by some young scientist. But Vaghul said: 'These are exactly the kinds of things we want to fund in this country.'" Biocon head Kiran Mazumdar-Shaw says the award goes hand in hand with responsibilities
Mazumdar-Shaw used that technology to develop enzymes for Ocean Spray, an American fruit juice company. "Till today, that enzyme has not been replaced," she says with pride. "It feels so good that we did all that here, in Bangalore."

Biocon, today a billion-dollar company and Asia's largest biopharma concern, started in the garage of Mazumdar-Shaw's rented home in Bangalore, with seed capital of Rs10,000 (around Rs4 lakh today). When she set up what is now one of the top 20 biotechnology companies in the world, banks wanted her father to be a guarantor.

Mazumdar-Shaw disagreed on principle. "I would argue that I am Managing Director, and bank norms require the MD to stand guarantee," she says. "Why am I different?" When she met the General Manager of Canara Bank at a friend's wedding reception, she complained about the bankers' attitude.

The next day, the manager called her to say the loan had been sanctioned. The company's shift in the late 1990s from enzymes to biopharmaceuticals made global scale possible. But for Mazumdar-Shaw, the eureka moment was its 2004 initial public offering, or IPO. It was oversubscribed by 33 per cent. "See, until you have worked hard and go for an IPO, you will not realise the value of what you have built."

If Mazumdar-Shaw had succeeded at becoming a brewmaster, Biocon would probably not exist. But in the 1970s, brewing was a male-dominated industry, and she could not get a job. She says: "The words were: 'You're a woman. It is difficult for a woman to deal with labour unions. You are high-risk. Can you command the respect of your male colleagues?'" Today, things have changed drastically. "It is interesting to see how the people who said, 'I have 15 minutes for you' are in awe of me.'" Mazumdar-Shaw, who is one of India's richest women, says she is a self-taught entrepreneur. 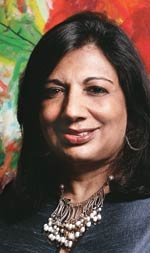 Kiran Mazumdar-Shaw
Among the influences in her life, she counts Vaghul, the banker who thought differently; Raghunath Mashelkar, promoter of science and technology in India; and cardiac surgeon Dr Devi Shetty, architect of the world's cheapest health insurance scheme.

But there is reverence in her voice when she talks about her father, whose ashes rest under the almond tree outside her office. She describes his role in her success. At a time when fathers did not take their daughters' intellect very seriously, Mazumdar-Shaw says hers told her: "I want you to use your knowledge to do something meaningful."

While the 25-year-old Mazumdar-Shaw was setting up Biocon, her friends were getting married. It was her father who encouraged her to stay the course. "When I started the company, my father was so excited for me," she says, her eyes moistening.

Her father taught her that people were the most valuable asset in business. She says: "My dad always said, 'Treat them with respect. Everyone has something to contribute.'" Her ground-level office on Biocon's leafy campus has a relaxed, informal feel, and her door is always open. Her staff is fiercely protective of her.

Her vision for the company has evolved from the goal of improving India's scientific record to the dream of "a made-in-India novel drug". When she talks about Biocon's plans to take insulins global and move from cancer care to cancer cure, her enthusiasm seems almost childlike.

Behind many dreams that come true, there is a choice that many might quail at. "I got married only at 44," says Mazumdar-Shaw. "My work was so important that I didn't even think about having a family. I miss having a child. But that's a sacrifice." She says she is happy with all that she has achieved. "I have made discoveries about myself, and have learnt to get ordinary people to do extraordinary things," she adds.