Shweta Punj
The headquarters of Tractors and Farm Equipment, or TAFE, in Chennai, including the office of the Chairman and CEO, Mallika Srinivasan, has no carpets. A chairperson's office without a carpet? Srinivasan prefers it that way. "Chennai's weather is humid," she says. "Carpets will only aggravate allergies."

It is a reflection of her no-frills working style. She reveals she recently got herself a smaller desk. "I didn't need a desk as big as the one I earlier had," she says. Srinivasan has always lived the way she wanted to. Her father - industrialist A. Sivasailam, head of the Rs7,000 crore, Tamil Nadu-based Amalgamations Group, who passed away in January - had suggested she study literature. But she had different dreams. She sought and obtained admission into Wharton School in Pennsylvania, US - one of the world's most prestigious business schools, for an MBA. 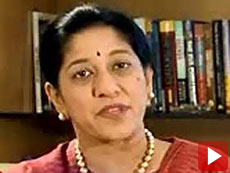 TAFE chief Mallika Srinivasan speaks on her success mantra
Even the fact that she was married by then - to Venu Srinivasan, now chief of TVS Motor - and the mother of a newborn, did not deter her. Her infant daughter in tow, she left with her mother. "I would go to the laundry room to study because the hum of the washing machines was a consistent, comfortable noise," she recalls.

On her return she joined TAFE - one of the Amalgamations Group's high-profile companies - as general manager, planning and coordination. "There was no pressure to join the family business, but there was encouragement if you wanted to," she says.

Since then she has risen to become India's tractor woman making an indelible impression in a heavily male-dominated industry. TAFE's turnover, a mere Rs86 crore in 1985 - the year she joined - had risen to Rs5,800 crore by 2010/11, making it the second biggest tractor company in India after Mahindra Tractors. It is third biggest in the world, after Mahindra and the US-based John Deere. From around 4,000 tractors a year in 1985, the group now manufactures 120,000 annually. "Our exports' growth rate is much higher than that of the industry," she says.

Despite working in a family-owned company, Srinivasan's early days were not easy. Though her designation was impressive, she was not given any job description when she joined, but merely told to find out what she could do. Her office was a partitioned space in one of the TAFE building's corridors.

"There was a well-set team in place," she says. "Most of the members had worked for my father since he started TAFE in 1964. And here was this little girl coming along to join them. Some were welcoming, but some were very sceptical. 'Let's see how long she lasts,' was their attitude." It was made clear to Srinivasan that before getting any important responsibility, she would have to prove herself. 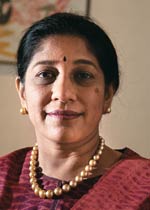 Tractors and Farm Equipment chairman and CEO Mallika Srinivasan
The sceptics underestimated her. She promptly got down to business, holding discussions with other employees, trying to see where she could add value. "It was a great induction where only the fittest would survive," she says. "But in a few years, I had a complete grip on the business." It shows. At nine in the morning, when Business Today met her in her Chennai office, she is already fully immersed in her work, rattling off figures and projections and plans, amid giving instructions to her employees.

Her biggest coup so far was the acquisition of Eicher Motors in 2005, the move that catapulted TAFE into the No. 2 slot in the country. "Many conservatives in the company were very surprised by the bold move," says Vijay Kumar Browning, who handles TAFE's corporate communications.

T.R. Kesavan, Senior Vice President, Marketing and Product Strategy, TAFE, says he decided to join the company only after meeting her. "She is very hands-on. She has such passion and drive," he adds. He recalls the downturn of 2000 when TAFE, like all tractor companies, was badly hit - its sales fell from 49,000 to 24,000 tractors a year. Srinivasan turned the setback into an opportunity, investing heavily in research and development, and launching new products. "It is to her credit that we recorded a profit even that year," says Kesavan.

Srinivasan insists TAFE is not in the business for market share and stock market gains alone. "We have to provide good returns for our shareholders, but there are various other parameters as well for judging the success of a business," she says. "In family businesses we pay a lot of attention to sustainability as well."

Given the travails she faced while young, she has advice too for young women seeking professional careers: "Do not get bogged down by the constraints you face," she says. "Search for opportunities. But most important, you must be happy doing what you do." Her days at Wharton remain among her most treasured memories. She is still in touch with many of her friends. When her daughter Lakshmi Venu, whom she had taken to Wharton with her, married Rohan Murthy, son of Infosys founder N.R. Narayana Murthy in a high-profile wedding in June this year, a number of her Wharton friends flew down.