The Piramal Healthcare Director runs the business with a smile

Shweta Punj
In the mid-1970s, a medical student at the University of Mumbai was driving in the city's Parel mill district, when she saw a girl, about four years old, hobbling on tiny crutches. The child had polio. The future Dr Swati Piramal, then all of 19 years old, decided to fight this preventable yet widespread disease. Today, the quiet resolve that drove her to choose - and win - this battle helps her run one of the country's top five pharmaceutical companies.

Battling polio in the crannies of working-class Mumbai was a fight that took not only medical expertise but organising skills. "The polio-afflicted children in the area were from mill workers' families," says Piramal. Her goal was to establish a "no polio zone". She and her medical school friends set up a polio centre. In the first year, they treated 25,000 children. To convince local residents to get their children immunised, Piramal and her friends literally resorted to song and dance - they performed street plays about polio prevention. They also went door to door, educating families. They treated children, mostly for free. Ten years later, everyone in the area who needed vaccination or treatment had received it, so they closed the centre. 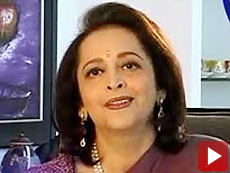 Piramal Healthcare director Swati Piramal says knowledge has to be backed by action.
Swati Piramal, who followed up her MBBS with a Master's in Public Health from Harvard University, is now Director, Strategic Alliances and Communications, Piramal Healthcare. Her company headquarters are in Parel, but her vast office, with works by M.F. Husain on the walls, is a far cry from the workers' tenements where she spent much of her student days. Her conversation is peppered with optimism and quotes from the Upanishads.

"Whatever you dream, you can do," she says. "At every step, it is your effort. If you just wait for things to happen, they won't." She and her husband Ajay Piramal, Chairman, Piramal Healthcare, built the company against the odds. The Piramals were textile industry veterans, but the 1982 mill strike crippled the business. "It had been our family business for over 100 years," she says. As if that was not enough, Piramal's father-in-law died soon afterwards, and her brother-in-law was diagnosed with cancer.

Her husband, then just 29, was made group chairman. "Everybody said: 'You are too young'," she says. "But I told him: 'You can do it. We can do it.'" The couple steadied the business and brought it back on track. "It was a hard journey," says Piramal.

The couple knew nothing about the pharmaceutical business when they decided in 1988 to bid for Nicholas Laboratories, an Australian multinational that was exiting India. Piramal was just 28 at the time, and her husband was 33. Their move was a bold step at a difficult time. When they met Mike Barker of Nicholas Laboratories and told him of their dream to make the company one of the top five in Indian pharma, he laughed in disbelief. Nicholas Laboratories was ranked 48th in the Indian industry at the time. Barker sold them the company for Rs16.5 crore. A decade later, the Piramals went to see him with the company's annual report, which showed that the company had indeed reached the fifth spot. Swati Piramal, Director, Strategic Alliances and Communications, Piramal Healthcare
Piramal has a deceptively self-effacing manner and plays down her role in running the company. Asked whether she was behind the group's bold move into pharmaceuticals, she says with a laugh: "My family often says so." She credits her husband for his clear vision, and the goal of taking the company to the top five. Then, she quietly adds: "With my husband and me, it is very hard to say who did what."

Today, even as grandparents, the Piramals remain the archetypal business couple, working tirelessly to make Piramal Healthcare bigger and stronger. Their company employs hundreds of scientists, and manufactures not only in India but also in Britain and the US.

In the 23 years since the Piramals decided to buy Nicholas Laboratories, there have been many mergers, acquisitions and spinoffs. Piramal Healthcare recently announced that it will buy a 5.5 per cent stake in Vodafone Essar for around Rs2,890 crore. The money for this would come from the May 2010 sale of its branded generics business to Abbott Laboratories, an American company, for Rs17,140 crore. The sale to Abbott was followed by another one of Piramal Healthcare's diagnostics business to Super Religare for Rs600 crore.

The swiftness of Piramal's decision in 1998 to acquire a research centre in Mumbai from Hoechst Marion Roussel, a subsidiary of the German drug maker Hoechst, attests to her role in the company. She got a call asking whether her company was interested in buying the research centre. Her decision was made in minutes, after a quick consultation with her husband. The centre's 400 scientists are working on 18 molecules in various stages of development.

If her husband is the "the man with the vision", as Piramal puts it, she is the one who asks the tough questions that bring clarity to important decisions. "She is straightforward and simple," he says. Piramal is a driven businesswoman. "Even at home, we talk about what we can do to grow," she says. "I like to invite clients home, as I can make them feel welcome. Home is a good place to do business."