The cotton farmers in India have some cause to celebrate. India has overtaken the US as the second-largest producer of cotton, and is also now the third-largest exporter of cotton.

Deepak Pental
The cotton farmer, in India, particularly in Vidarbha, is renowned for his despair and for his alarming propensity to suicide. Yet, last fortnight, even as the “farm loan waivers” were making headlines, the cotton farmer in India had some cause to celebrate quietly away from the flag wavers. India had overtaken the US as the second-largest producer of cotton. Significantly, India also is now the third-largest exporter of cotton. And somewhat ironically, the driver of this turnaround has been the much-maligned Bt cotton.

Within six years of the launch of Bollgard (Bt) cotton, India’s cotton production has doubled from 158 lakh bales in 2002 to 310 lakh bales for 2007. “Increase in acreage (14.4 million or 63 per cent of cotton acres) and the number of farmers (4 million) adopting Bollgard (Bt) cotton is the farmers’ testament to the value they derive from crop biotechnology and their green signal to explore future potential,” says Sekhar Natarjan, Lead (India Region), Monsanto, the company that brought Bt cotton to India. 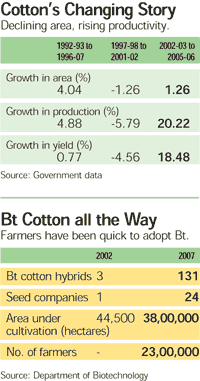 However, cotton is not the only genetically modified (GM) crop that holds out hope for Indian agriculture. It has been the first transgenic crop to have been approved for commercial cultivation and, as a Department of Biotechnology (DBT) official says, it has been the easiest to commercialise. Currently several others are in field trials. “Bt eggplant is expected to be the next to get commercialised, hopefully by the end of 2008,” says the DBT official.

The results from the field again are as interesting as in the case of cotton. “As against a 40-80 pesticide sprays required for a conventional eggplant crop, Bt eggplant requires only 1-2 sprays,” he says. There are, however, some reservations about GM cabbage within the government, too. That apart, the clear message from the success is to look towards technology for solutions.

Farm productivity has been almost stagnant since the ’90s, and quite low relative to world averages. Professor Deepak Pental, Vice Chancellor, Delhi University, and specialist in transgenic crops, says: “The success of Bt cotton encourages us to invest in research and development and to properly plan such research and not just leave it to the private sector.” That feeling probably comes from the fact that the private sector chases research in crops that have global markets, and not just the crops most critical for Indian food security.

Pental, who has worked on the mustard crop, also cites the urgency of more funds for research. “Our entire expenditure for the project on the mustard hybrid was probably equal to what Monsanto spends in a week on R&D.”

However, lower down the value chain there are simpler things that can be done to improve yields, or indeed improve the food supply in the country. Provision of quality, certified seeds to the farmers is a case in point.

Kalyan Chakravarthy, Country Head (Food and Agri Strategic Advisory Research), YES Bank, says that this is true for cereals such as rice and wheat as well, which show deterioration when the farmer retains the seed and replants it next year. “The seeds that are scientifically produced in the seed villages and properly certified can lead to a 10 to 15 per cent enhancement in yield in cereals,” says Chakravarthy.

Another simple, low-hanging fruit could well be adoption of modern farm practices and techniques. An interesting example is the variation in sugarcane recovery in India and Brazil. At around 13 per cent, sugarcane recovery in Brazil is, at least, a percentage point higher than in India, simply because the former uses mechanical harvesters. On the other hand, in India, manual labour is the norm as a result of which the Indian farmer tends to leave the juiciest and, therefore, the most profitable bottom portions of the cane in the field. “That straightaway translates into a 7-8 per cent impact on the bottom line of sugar companies,” says Rajesh Srivastava, Managing Director (Corporate and Commercial Banking), Rabo India Finance, adding that the usage of modern agricultural equipment by itself can improve yields by around 85-86 per cent. He recounts how the usage of a laser leveller by farmers in Punjab to level the fields before sowing has reduced water consumption by half.

However, what seems to be lacking is an overall policy vision for food security in the country. Not all crops are affected by the same set of problems, whether that is pest control, water scarcity or other issues.

Delhi University’s Pental favours a cropwise planning that may include transgenics as well as conventional methods to improve yields. And sometimes yields themselves may not give the complete picture. He points out that a sugarcane crop in Maharashtra shows good yields but needs more irrigation (25-30 rounds) over a 14 month period as against 8-9 rounds of irrigation needed over eight months for a crop in Uttar Pradesh.

Others such as Amir Ullah Khan, Director, India Development Foundation, believe that the way forward includes correct price signals for cost-effective production of food. “There should be a long-term movement towards producing commodities where India has a comparative advantage.”

Ashok Gulati, Director (Asia), International Food Policy Research Institute (IFPRI), too believes that the kernel lies in letting the producer have the best price for his produce, wherever he gets it, whether in India or overseas. “That will encourage him to invest more,” he says. Incidentally, four-fifths of the investment in agriculture comes from the private sector, essentially the farmers. And investment—both public and private—is crucial for the development of Indian agriculture. And certainly, the sector has started attracting investors now.