Massive capacities being set up by Hyundai, Tata, Maruti and others will enhance India's competitiveness in the global market and make it the hub of the world in the small car segment. 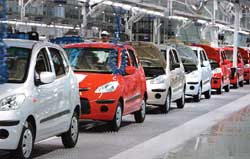 Hyundais plant in Chennai
The lines are shut at the second plant of Hyundai Motor India (HMIL) near Chennai and hundreds of unfinished i10s are sitting on the brand new assembly line as journalists tour the new facility that the South Korean carmaker has established at a cost of Rs 4,000 crore. Almost 10 years to the day from when Hyundai took its first tentative steps into the Indian market, it has decided to make this 300,000 cars per annum capacity plant, located next to its older facility at Irungattukottai, a global hub for the i10, its new small car.

Barely 50 km away, across the bustle and the traffic jams of the southern metropolis, at Oragadam, workers are building Franco-Japanese carmaker Renault-Nissan’s brand new Rs 4,000-crore factory.

Simultaneously, designers and engineers from both firms are working overtime at design and engineering centres (Renault has a design centre in Mumbai) on the cars that will roll off its 400,000-units-a-year plant, which will service markets across the world. “It is crucial that we design our cars in India as Indian engineers and designers have experience in frugal engineering.

If we have to design a car at a low price point, we have to be here,” Patrick le Quement, Senior Vice President, Renault (who is in charge of Renault Design), points out. Renault is close to finalising a deal with Bajaj Auto to jointly develop and manufacture a small car, which, according to Carlos Ghosn, CEO, Renault-Nissan, will cost around $3,000 (Rs 1.2 lakh). 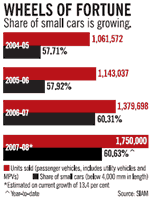 About 1,500 km to the north, in India’s other, and older, “automotive corridor”, Maruti-Suzuki India (MSIL) is ramping up production at its Manesar facility from 100,000 units of the Swift and SX4 to 300,000 units, which will include the soon-tobe-launched Splash and A-Star cars.

As in the case of Hyundai’s i10, India will be the source for the AStar, the latest of Suzuki’s “global platforms”. Shinzo Nakanishi, Managing Director, MSIL, candidly admits that even this additional capacity may not be enough. “That is why we bought a plot of land with enough room for expansion on the side,” he says. Adds B.V.R. Subbu, former President, HMIL, and Co-promoter of Argentum Motors: “India has the largest repository of managerial and manufacturing expertise when it comes to small cars, so it should not be surprising that India is becoming a small car hub. The only surprising thing is that it took so long.”

Interestingly, even as the rise in interest rates has taken the bottom out of the two-wheeler market (see On the Skids, page 140), the car market has continued to grow apace.

After registering a 20.7 per cent growth in domestic sales last year, the market is expected to grow 12-15 per cent this year. That will translate to a sales volume of over 1.5 million passenger cars.

And significant additional capacity will go on stream over the next 12-18 months, starting with the Hyundai facility, followed by the Fiat-Tata combine's capacity upgradation at Ranjangaon near Pune to 200,000 units as well as General Motors India’s new 140,000-unit plant in Talegaon near Pune.

Then, of course, there’s Tata Motors’ 350,000-units-a-year plant coming up at Singur, West Bengal, for the Nano. These will take the total installed capacity of passenger cars in India to 3.3 million units by 2010. Of this, three-quarters will be of small cars.

The main objective of many of these new facilities is to dramatically expand India’s car exports from around 220,000 units per annum (projected figures for 2007-08) to over 1 million units within the next two years. “Why not? India is already the world’s largest producer of small cars, and the additional capacities that are coming on stream will actually enhance our competitiveness in the global market,” says Jagdish Khattar, former MD, MSIL.

Crucially, the manufacturing facilities are being backed up with investments in research & development (R&D), recognition, some claim, of India’s engineering expertise. “Our Bangalore R&D centre currently employs 1,200 people and it is the fastest growing R&D centre in the GM network worldwide,” says Karl Slym, the recently arrived chief of General Motors India. “And you have to remember that these people are not just working on cars for India; they are working on all of GM’s next-generation improvements, including alternative energy power plants,” he adds.

GM recently showcased a product called the “Volt”, which is a “plug-in” hybrid, whereby users can actually plug in their car to a power socket to recharge the batteries.But despite the factories being built and all the bullish projections, there are more than a few potholes on the road towards becoming a global small car hub. The first is simply the old story of infrastructure. While H.S. Lheem, MD, HMIL, says that authorities at the Chennai Port Trust have worked “very hard” to ensure HMIL can export 300,000 cars from 2009 onwards, the problem HMIL faces is sending them down the 30-km road to the port, since Chennai prohibits the passage of heavy trucks during the day.

This has created logistics headaches for Hyundai’s exports team. Lheem accepts that it will be difficult to square this circle; so, Hyundai is trying to work out a deal with the railways to get around this problem.MSIL also faces greater logistics issue as, unlike Hyundai, its factories are over a thousand kilometres from any port. “I don’t think ports will be an issue for us right now, but in two or three years time, once we start exporting 200,000 cars a year, we will need to use a new port,” says Nakanishi. MSIL has plans to export about 30,000 cars through Mumbai this year.

The second, and more pressing, issue is that of the strengthening rupee. “I did not expect the rupee to become this strong against the dollar. This will force us to re-evaluate some of our export plans,” says Lheem, admitting that HMIL may have to incur losses on exports billed in dollars. “Thankfully, a lot of the exports from India are to Europe, where we bill in euros, but the rising rupee is a problem.

If India is to become a small car hub, it will need to export to many parts of the world where the dollar is the accepted mode of payment, and this will be a problem,” Nakanishi says. He feels that escrow dollar accounts held outside India may be a way around this conundrum.

But infrastructure and the rising rupee aside, manufacturers are still extremely bullish about India. “I came to India for the first time in 1983 to set up the first Maruti plant. People who complain about infrastructure today should go back to those days, and look at the massive improvement,” Nakanishi points out.

Any which way, big ships with their bellies full of small cars will be departing Indian shores by 2009, and India will finally achieve her ambition of being a nation that gives wheels to the world.