In many ways, Dhoni is like Kapil Dev. Both hail from small towns not known for producing cricketing talent till their arrival. Both burst on the international cricket scene and immediately set the stands on fire with their explosive batting. M. S. Dhoni
In many ways, he is like Kapil Dev. Both hail from small towns not known for producing cricketing talent till their arrival. Both burst on the international cricket scene and immediately set the stands on fire with their explosive batting. And both have led India to World Cup triumphs— against the odds—when the captaincy was thrust upon them in difficult circumstances, albeit in different forms of the game. Yes, Mahendra Singh Dhoni (26), the youngest son of Pan Singh, a retired juniorlevel manager at Mecon and Devki Devi, has climbed quite a few peaks already. But Mahi, as he is affectionately called, has several others to conquer.

The crowning glory of his still young career as an international cricketer was leading India to the Twenty20 World Cup triumph. His captaincy and leadership skills drew all-round praise. Former Indian captain Bishen Singh Bedi, who is not known for showering fulsome praise on anyone, is impressed. “The future of the game in the country is safe in his hands,” he says.

Dhoni the cricketer actually has two personas. As a player, he is dashing, swashbuckling and a great entertainer. As captain, he is cool, unhurried and—this is what wins him so many admirers—simultaneously instinctive and calculating. Best of all, he is very grounded, and has not let the fame, adulation and the big bucks (really big ones, at that)affect him. “Dhoni is extremely level-headed and stable. For me, that’s the one personality trait that stands out in him,” says commentator Harsha Bhogle, who has watched him develop from a raw talent into an international star.

His cricketing achievements are too well-documented to bear detailed repetition here. In April 2006, he was ranked #1 on ICC’s list of Best One Day Batsmen; he has since fallen off that perch, but has remained among the top 3. Then, he holds the Indian record for hitting the maximum number of sixes (10) in an ODI; he did that in the course of his epic innings of 183, a world record for a wicketkeeper, against Sri Lanka in 2005, and averages 52.76, the 4th highest in the world and the highest by an Indian batsman. But more than the statistics and the endearing stories about him, it’s his style (both in batting and his hair), that made the boy-next-door from Ranchi an icon across the country (the MTV Youth Icon Award in 2006 was in recognition of that).

Dhoni is known to be a film buff. When he first burst on to the international stage, he was called the John Abraham of cricket because of his flowing locks. Abraham and he have, since, both visited barbers, but Dhoni’s Bollywood links apparently go deeper than that. The “Dasher from Jharkhand” has been, at various times, linked to actresses like Tanushree Dutta and Deepika Padukone, but he has trotted out the usual “we are just good friends” line to keep prying journalists at bay.

Those who know Dhoni for long vouch for the fact that the popular perceptions about him are based on facts. “He is as calm and composed as the Himalayas,” says Chanchal Dutta Gupta, a Jharkhand state selector and cricket coach, who has known Dhoni since he was a boy. That’s the quality that impressed everyone when the captaincy of the Indian Twenty20 and ODI teams were thrust on him at a younger age under peculiar circumstances.

He was appointed to lead India in the former when senior pros Rahul Dravid (then captain of Team India), Sachin Tendulkar and Sourav Ganguly opted out, and he was appointed captain of the ODI team when Dravid suddenly resigned without assigning any reasons.

There was a big element of luck in both these appointments. Former frontrunner for the captaincy Virender Sehwag was out of favour with the selectors and the claims of Yuvraj Singh were overlooked.

Some experts then felt that the selectors had taken a gamble. But all those doubts have now vanished. “It was remarkable to see how Dhoni kept a cool head in all kinds of situations. His captaincy has added a new dimension to Indian cricket,” says Abbas Ali Baig, a former swashbuckling opener from Hyderabad.

It is a combination of all these factors that make Dhoni what he is. And it’s not only cricketers and cricket commentators who are members of his fan club. India Inc. is also lining up at his door, cheque books in hand, to cash in on his iconic status. At last count, he was endorsing about 20 brands— among them, Reebok, Videocon, GE Money, Pepsi, Seagram’s Royal Stag, Reliance Mobile, Parle Milk Shakti and Exide—for a reported fee of Rs 1.5 crore per brand per year. Says Jeet Banerjee, Director, Gameplan Sports, who manages Brand Dhoni: “The durability of his brand is proved by the fact that all the brands he endorses have renewed their contracts.”

So, what exactly do brand managers think of him? Says S.B. Ganguly, Chairman Emeritus, Exide Industries, who, as Chairman & CEO of the company, signed on Dhoni as the Exide Brand Ambassador: “Exide is a century-old brand and our association with Dhoni adds a dash of youthfulness and contemporariness to this brand. Our product talks of power; so, who could have been a better brand ambassador than Dhoni, who has virtually recharged a youthful Team India?”

Adds Sanjay Behl, Head, Brand & Marketing, Reliance Communications: “Dhoni is far more than just a cricketing hero in India. He is a youth icon, who epitomises self-belief in his abilities to conquer the world. His core values are completely aligned with Reliance Mobile’s values of ‘Think Bigger, Think Better’; this leads to a seamless brand fitment.”

Banerjee confesses that he is floored by Dhoni’s down-to-earth charm. “My experience of managing Dhoni has been a wonderful one. He doesn’t make many out-of-turn demands. It has been a really enriching experience, and I’ve learnt a lot from him as a person,” he says. “Down to earth” and “level headed” are two descriptions that keep cropping up when one discusses Dhoni. The man himself is aware of his qualities. “The hype and the mob frenzy don’t really mean much to me. I don’t think too much about them. I know that if I’m not doing well, then all this will end. I realise that and I guess it’s in my nature to be level-headed,” says Dhoni. 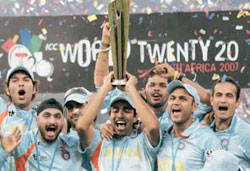 Cup of joy
So, apart from the fact that he now needs a police escort even while going for a hair cut to his favourite saloon in his native Ranchi (and, one would imagine, elsewhere in the country, too) and the fact that he is now immensely wealthy, he still remains the boy-next-door. Says Santosh Lal, a longtime friend and a member of the Jharkhand Ranji squad: “Mahi never misses any opportunity to catch up with friends. He loves biking and partying till late night whenever he is home and is a wonderful friend to have on and off the field.” Lal lets on that Dhoni is particularly partial to chicken butter massala with naan and chicken tikka pizzas.

He may not have changed much, but his lifestyle has undergone a sea change. The young boy from a modest background, who used to borrow bats and other cricket gear from a well-wisher’s sports goods shop and take lifts on friends’ bikes, now owns more than 10 motorcycles himself, including a Harley Davidson, in addition to a Scorpio and a Pajero. He also has two pets—Sam, a German Shepherd and Zera, a black Labrador—and loves playing games like Counter Strike, Black Hawk Down and Men of Valour on his laptop.

Since 1990, Indian cricket captains have had long tenures, unless, like Dravid, they resign on their own. So, Dhoni can look forward to a long reign. He has begun well; he is still young, and, even without the seniors, has the nucleus of a good side under him. So, there’s every possibility of Team India scaling greater heights in the coming years. Says Sambaran Banerjee, former National Selector and former Bengal captain: “I have no doubt whatsoever that Dhoni will remain a role model for many years to come. Indian cricket will be 200 per cent safe in his hands.” No wonder he made it to this very exclusive list.