'The crisis is an outstanding opportunity to change your business model'

It’s time to be bold, think big and make a profound shift—that’s the prescription of a five-member panel of experts on how to haul the IT industry up by its bootstraps.

The panellists
The high-flying IT industry has been brought crashing down to reality in the last 12 months by the economic slowdown. After enjoying 30 per cent plus growth rates for the last couple of years, National Association of Software and Services Companies (NASSCOM), the IT industry’s apex body, pointed to a grim future when it halved the growth rate for the industry to 16 per cent for the year. To comprehend where this industry is headed, BT and NASSCOM assembled a top-notch panel of industry executives, consultants and analysts at the India Leadership Forum in Mumbai. S. Ramadorai, CEO and MD, TCS; Suresh Vaswani, Joint CEO, Wipro; Noshir Kaka, Director, McKinsey & Company; Peter Bendor-Samuel, CEO, Everest Group; and Pramod Bhasin, CEO, Genpact and Vice Chairman, NASSCOM, took part in a freewheeling roundtable moderated by BT’s Assistant Editor Rahul Sachitanand. Excerpts:

BT: Gentlemen, thank you for taking part in this roundtable. Perhaps we could start by getting a macro picture of the industry. How bad and how deep is this slowdown?
Ramadorai: The IT industry can’t be immune from any of the macroeconomic events unfolding around us. The slowdown will play out in terms of reduced growth rates, pricing pressures, cancellations, delays or no orders. The other part to be kept in mind is that as the tightening happens, protectionism as an issue will make headlines and we need to be conscious of it. The problem is for real; there are going to be challenges we must focus on. 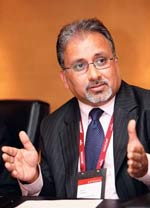 Suresh Vaswani
Bendor-Samuel: The perception of this severity changes around the world. It is most acutely felt in the US and the UK. (But) it has affected IT much less than other industries. We have a slowdown in India, and in global services driven more by indecision than lack of demand. There is significant pent-up demand. We perceive that the indecision is starting to ease. Everyone has robust pipelines and people are beginning to make decisions. We should emerge (from the slowdown) in the next few months. We even see indications of firms that have laid off 10,000-20,000 people now keen to make modest improvements in global sourcing… that points to the remarkable nature of the market. There aren’t many industries that are coming through the storm as well as we are. S. Ramadorai
BT: Noshir, do you see a fundamental shift in the way the Indian IT industry does business? Is this a good opportunity as any to make this change?
Kaka: I hope we see a change in the business model. That is not to say the Indian offshore model doesn’t work; the price-performance offered by Indian companies has afforded savings of at least $25 billion over the past 20 years. Having said that, we’ve used only one lever and one customer segment: Cost and certain verticals in developed markets. If you look at that we’re in a little sandbox of opportunity. What’s the opportunity beyond Fortune 100 and into SMEs (small & medium enterprises)? There is an immense opportunity, but you can’t target the Chinese market with the existing Indian model. 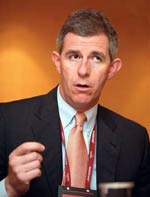 Peter Bendor-Samuel
BT: Pramod, what do Indian companies need to do to make this shift?
Bhasin: I hope it is a profound shift; a lot of metrics to measure our business today are wrong. They suggest a commoditised business. You know how much headcount you have, how many you have on the bench or your FTEs (full-time equivalents). That’s running a factory. If you’re going into a world where we’re running products and services, you’d run one range of products to SMEs, a different range of services to China and a different level of services by domain and expertise to large-scale enterprises. I think Indian companies can make this transition. This crisis is an outstanding opportunity to change your business model. The problem is every month is worse... the assumptions you made four months ago are no longer valid. Companies no longer know where the bottom is. We’re yet offshore-centric. We can’t only think of our businesses as offshore and onshore.

Vaswani: It is a tough market situation… (But it is also) a great opportunity to have different conversations with your customers. Earlier, you used to go with an offshore story. Today, you won’t be successful with just an offshore story. It is a good opportunity for us to move from largely managed services and managed operations players to become transformational players. This environment is also an opportunity to look internally and look at cost structures—look at how much efficiency and productivity you can drive. We usually talk about a $47 billion target market. It is actually $1.6 trillion, since we’re truly global players.

Ramadorai: Let me amplify a couple of statements the other panellists made. If your business has become commoditised, you’re going to fight a pricing war and you’ll disappear. This is a time to reflect: Look at businesses that are not commoditised and build on them. The term offshore in my opinion will disappear. Offshore connotes wage arbitrage and that’s not the model this industry is trying to build. Having a presence in Latin America, India, China is part of the process. My own advice to my people and the IT industry is to make the transition before problems hit you. This is a time to make bold decisions as a country and as an industry. Pramod Bhasin
BT: Where would you rank the industry in terms of innovation?
Bendor-Samuel: I think Indian companies have been and are the disruptive influence in this space. I see the pace of change picking up. I’d like to contest something that’s been said here: I think the new businesses will be in addition to the FTE-based model currently in use. We’ve got to add productisation on top of existing business and add new risk models. Its not just about being low cost; it’s about desire and commitment.

Ramadorai: You have to pitch at the strategic level. This nickel-anddime thinking of taking $10 million of cost out is not the value proposition. You have to take out $300-500 million to $1 billion; you have to talk about transformation.

Bendor-Samuel: Historically, Indian firms have been well run, but autocratic. I think the enemy is from within. We’re going to have to think about the way we think about things like risk. We cannot handle the scale of partnerships the old way. 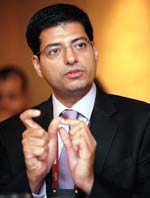 Noshir Kaka
BT: Do you all agree on Indian leaders being autocratic?
Bhasin: If I may disagree with Peter, I think scalability is an issue. Autocracy? Not at all. I have worked in the US for 25 years and I have seen far more autocratic leaders there. Companies here do have large ownerships by a single person, but I don’t see them being autocratic.

BT: What is the role of the leader— Chairman, the CEO—in these troubled and turbulent times?
Vaswani: The role of the CEO is to drive down costs, ruthlessly. It has to be driven operationally. It has to be driven daily, weekly, biweekly, otherwise the cost will never be eliminated. Yet, you have to make sure you’re not compromising the future at the cost of driving down costs today.

BT: How much damage has the Satyam scandal done to Indian IT?
Ramadorai: This issue is more of a one-off. Corporate governance has to be a way of life rather than someone telling you this is important. Companies here are great with disclosures, especially in IT. This is a time for reflection on the roles of directors, management and auditors.

Kaka: Anyone who sees the Satyam scandal as a reason for their poor performance is just looking for an excuse. Can companies do more? Of course. We should do whatever we can to ensure nothing like this ever recurs.