Some 590 million will live in Indian cities by 2030— about three-fourths more than in 2008. Massive and urgent changes in governance, funding and planning are needed to ensure that they live a good life.

Mahatma Gandhi's words that India lives in its villages are still a truism. But the accelerating pace of urbanisation suggests that, much before the close of this century, India will indeed live in its cities. Going by current trends, 40 per cent of India's population will be living in urban areas by 2030. That's 590 million people in concrete jungles, as against 340 million in 2008 and 220 million in 1991.

The question is not whether these many people will actually find themselves in the cities—but how they will live or whether they will be able to live at all. Already, India's urban landscape, barring a few well-kept, pampered conclaves such as Lutyen's Delhi, is unpleasant; the deficit of urban infrastructure dehumanising. Village-focussed India has hardly made any space for cities on its national agenda. Although cities generate 80 per cent of all taxes, less than one per cent of this gets ploughed back into urban infrastructure.

The neglect and deteriorating quality of living standards haven't deterred millions of villagers from thronging to cities and towns in pursuit of economic prosperity—after all, cities account for 30 per cent of GDP. But this scramble is worsening the crisis that cities face in housing, sanitation, water supply, transport...the list is growing.

And a crisis it already is. Urban Indians get only 105 litres of potable piped water a day, against a basic minimum requirement of 150 liters, according to a McKinsey & Company report: India's Urban Awakening: Building Inclusive Cities, Sustaining Economic Growth. Only a little more than half of urban Indians have access to sewerage and septic tanks. More than 80 million Indians live in urban slums. 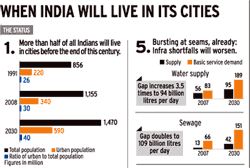 Click here to Enlarge
The demand-supply gaps for key urban services are so huge that supply needs to be increased at unimaginable rates (see charts). Consultants McKinsey reckon that India needs to build 700-900 million sq.m. of commercial and residential space every year. That is equal to two Mumbais. "Unlike rural India, urbanisation has gone on almost unnoticed," says Arun Maira, the Planning Commission's member in-charge of urban issues. "No one said: Let's do something about urbanisation."

When the Jawaharlal Nehru National Urban Renewal Mission (JNNURM) was announced in January 2005 as the National Urban Renewal Mission, it was the first time that urbanisation got on the national agenda in a comprehensive and planned way, backed by funds. Since then, the JNNURM has been a bonanza for states willing to complete specified policy reforms, and gives cities and towns across the country equal access to funds.

Except that there are hardly any big advantages of it. The Centre may now set up a forum for dialogue with all chief ministers to sort out funding and governance issues. The Centre is ready to make available technical training institutes— a couple of which have already become functional in Hyderabad—for helping states.

"The JNNURM is like the tiny green shoots breaking out of the snowladen winter ground of urbanisation," says Maira. "After the JNNURM, the Urban Development Ministry at the Centre has a new agenda," says M. Ramachandran, Secretary to the Ministry of Urban Development. International institutions such as the World Bank and International Finance Corp (IFC) have begun to offer financial and technical help.

But the biggest challenge for the Urban Development Ministry is the lack of political will at the state level to transfer powers to urban local bodies, train staff and change mindsets. The Centre is expected to incorporate quite a few changes in phase II of the JNNURM once the current one ends in 2012.

"Governments should be able to pick from a menu of technical, funding and governance instruments to deliver the urban service or reforms demanded by every urban community," explains Maira.

Getting there will require enormous resources: McKinsey says it will cost $2 trillion in all including capital expenditure of $1.2 trillion by 2030— an eight-fold increase in per capita income from $17 to $134 per year.

Though the figure is huge, funding will not be a worry since efficiently managed cities can raise enough resources through property taxes, land revenue, user charges—direct and bankable—and by fostering publicprivate partnerships. "Users don't shy away from paying for high quality services and efficiency in the real estate market which also makes cities highly bankable for investors," says Delhi's Chief Secretary Rakesh Mehta.

The real challenges lie in the ability for governance and planning and political will. "Governments never manage to plan or even rightly project the mismatch in the demand and supply of urban services," says Mehta. When he had pushed for adding to Delhi's power generation capacity way back in 2006, his efforts were derided. Supply would outstrip demand, he was told, and plunge the utilities into losses. Today, even that extra capacity is proving to be short of the requirement.

Predictably, the most difficult task has been the need to change government structures and mindsets. Public policy makers at all levels—Centre, states and the city—are clueless even on where to begin as was seen during a recent review of technical plans submitted by states to back their funding demands. It turned out that most of the technical proposals were cutand-paste jobs—master plans prepared by some state were cut-andpasted by some others. The relatively small team of officers at the Ministry of Urban Development had missed this as it does not have the technical skills to vet them.

What's the blue print for change then? According to the McKinsey report, changes are needed in governance, funding and planning. The most successful governance is a devolved model that empowers local governments but also holds them accountable.

Planning should be such that allows cities to make informed choices on use of scarce resources like land. The cities should also have clear policies on job creation, public transportation, affordable housing and climate-change mitigation. In the Indian context, what is most critical is to build services anticipating demand rather than playing catch-up.

"Carrying out the reforms described in the McKinsey report could add 1 to 1.5 per cent to the annual GDP growth," says Shishir Sankhe, Director, McKinsey & Company. More importantly, it will improve the prospects of a better life for 250 million people who will join the existing 340 million as the new urban Indians.