It emerges trumps amongst smaller banks. CEO Rana Kapoor has a game plan to take it into the big league. Rana Kapoor
Over the past one year, A team of YES Bank was busy with a microfinance pilot project in some parts of Mumbai. The ‘new-generation’ bank recently began offering small loans in the Mumbai suburbs through its various branches, as a part of this project, which has been dubbed “YES Sampann” (Sampann translates into complete in Hindi). That’s a bold foray for a bank that’s just four years old. After all, transaction costs for microfinance accounts, for a bank like YES Bank, are high, and returns are non-existent, at least for now. Yet, the high cost of operating such accounts has not deterred the management of India’s youngest bank from going full steam ahead at a time when its dyed-in-the wool counterparts are grappling with liquidity problems and profitability concerns.

The impressive bit about YES Bank is that it has been able to move, in quick time, beyond the traditional model of lending and borrowing, into allied areas like investment advisory and distribution of financial products. Its positioning in a fairly cluttered banking landscape is to be the bank for emerging and future India. “Since inception, our objective has been to provide all kinds of services and to be a universal bank,” says Rana Kapoor, Managing Director & CEO, YES Bank. Clients, he says, are looking at comprehensive services rather than just borrowing and lending. That strategy seems to be working well: in the first half of the current fiscal, non-interest income constituted almost 44 per cent of total income. However, a section of analysts isn’t too comfortable with the bank’s strategy to have high non-interest income in the current environment. “YES Bank has relied on wholesale deposits and fee-based income, which have slowed down in the recent past. Non-interest income grew at compounded annual growth rate of 90 per cent, but it has slowed down to 25-30 per cent,” says Vaibhav Agarwal, Research Analyst (Banking), Angel Stock Broking.

Kapoor, for his part, isn’t going to focus only on advisory and fee-based income in the years ahead. Over the next three-to-five years, YES Bank plans to flag off a mutual fund, retail broking and insurance distribution. Insurance itself, however, is a no-no. “There are already a lot of players in this business,” says Kapoor. What’s more, the longgestation nature of the business juxtaposed against the age of this bank makes an insurance venture all the more risky. YES Bank will also steer clear of personal loans and credit cards, which have become a liability of sorts for several banks. 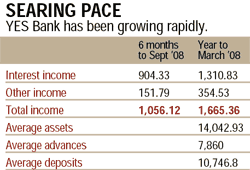 Click here to Enlarge
Caution, however, shouldn’t be mistaken for a lack of aggression. So far the bank’s growth has been high mainly due to a low base. Kapoor is keen to grow at 35-40 per cent for the next three-to-five years. For the second quarter ended September 2008, YES Bank’s net profit increased by 40.5 per cent to Rs 63.6 crore and total net income was up 35.1 per cent to Rs 214.4 crore. The second quarter results were not in line with a lot of analysts’ expectation; the reason for this was lower than expected non-interest income due to sluggish financial markets, especially the stock market. “The overall business model of the bank is good, only the current business environment has changed the outlook for the bank,” says Angel’s Agarwal, who prefers large bank shares for investment over smaller banks. 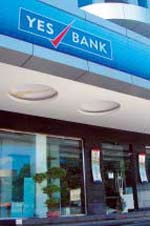 A YES Bank branch
Yet, you have to hand it to YES Bank for thinking out of the box to differentiate itself from its pedigreed peers. Since the beginning, the bank identified emerging sectors like agriculture, life sciences and infrastructure for its core banking operations. The reason for this is that these are the sectors that will have to grow if India has to emerge as a leading global economy. These sectors constitute around 45 per cent of YES Bank’s total advances. Even though the non-interest income for the bank has slowed down, loans to small and medium enterprises are witnessing good growth. Analysts say this could be one of the big businesses for the bank in future.

The bank does not see any problem in growing its loan book and the required capital for it. “Current capital adequacy is enough for us to grow for the next one year,” says Kapoor. The bank has a capital adequacy ratio of 14.3 per cent. Moreover, the bank has no plans for selling an equity stake to a strategic investor once the next stage of banking reforms comes into place. YES Bank wants to be among the top five private sector banks by 2012—on its own.