The most recognisable face of Indian cinema worldwide, SRK rules the entertainment industry. 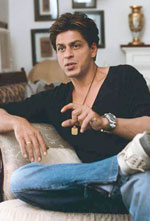 Shah Rukh Khan
It’s cold inside Studio Number 5 at Kamalistan Studios, in suburban Mumbai. As the camera pulls back, Shatrughan Sinha whirls around, glowers at the lens and bellows that word which has guaranteed frontbenchers their paisa vasool for decades now— Khamosh! Sinha is shooting an ad for a television set that is soon to be launched across the country. As take after take is shot and canned, the ad film’s director, Prahlad Kakkar, turns around and proclaims rather dramatically: “This is history in the making. Shatrughan Sinha does not do TV advertisements.”

That’s largely true. A decade ago, most Bollywood actors would have displayed an upturned nose to ad film makers. But all that has changed. “Earlier, Bollywood actors did not do ad films. Period. But Shah Rukh Khan changed that,” says Kakkar, who remembers shooting with Shah Rukh for a Brahmaputra Tea commercial for the first time, more than a decade-and-a-half ago. Those were days when Khan’s rate for commercials was Rs 6-7 lakh and he was still a budding star.

Today, it’s tough to ignore Shah Rukh Khan. When he is not on the television promoting his latest movie or waving to crowds in a cricket match, he peers out of gigantic hoardings smiling smugly, selling clothing, talcum powder, pasta or laptops. Or with the irritating energy of a persistent roadside dictionary salesman, peddles SIM cards for a leading telecom company. In fact, according to data from AdEx India, in the first 11 months of 2007, Shah Rukh Khan’s commercials have been onair across Indian television channels for 887-odd hours, i.e., 31,94,853 seconds. In 2003, that number was just 49 hours, i.e., 1,79,230 seconds. Then, Khan used to endorse 8 brands across 6 product categories. That has changed to 33 brands across 21 product categories. It is believed that Khan charges upwards of Rs 5 crore for a one-year endorsement contract.

So, what is it that makes Khan such a great draw for advertisers? “His image cuts across all socio-economic classifications as his appeal does not get restricted to any class, community, gender or age,” says Aditya Agarwal, Director, Emami Group of Companies. “His endorsement raises the product’s profile beyond imagination.” Others like Brand Consultant & Managing Partner of Chlorophyll, Anand Halve, believe that ‘me-too products’ use Shah Rukh Khan hoping to get some attention and boost sales. “His willingness to do anything from endorsing Chyawanprash to designer accessories like watches also helps. One day, he is endorsing Mayur and the next day it’s Belmonte. One day, he endorses Omega, the next day it’s TAG Heuer. He knows there are several fish to fry,” says Halve.

Even as film industrywallahs snigger at Khan’s growing advertising portfolio and his innumerable stage shows and performances at events from marriages to industry award functions, the Khan juggernaut seems to roll on unmindful of all the criticism. “Shah Rukh has always broken the rules and stereotypes in the industry. Stereotypes like television actors do not make it big in the movies, movie stars do not do ad films etc,” says actor Pavan Malhotra, who has acted with Khan since his early days in television.

In fact, Khan’s career is a great example of constantly defying stereotypes. After acting in half a dozen serials like Fauji, Circus, Umeed, Wagle ki Duniya in the late ’80s, Khan moved to Mumbai to pursue a career in movies. His first movie Deewana (1992) won the actor accolades despite the fact that the actor’s entry in the movie happened after the interval and he was pitted against a bigger star, Rishi Kapoor. The following year, two movies where he played characters with negative shades, Darr and Baazigar were released. Both went on to be massive hits.

Just as the actor was getting tagged as an “anti-hero”, movies like Karan Arjun (1994), Kabhi Haan Kabhi Na (1994) happened. But the turning point of Khan’s career came in 1995 with the release of Dilwale Dulhania Le Jaayenge. The blockbuster movie shattered most Indian movie records and still continues an uninterrupted run at the Maratha Mandir theatre in Mumbai (some say at the behest of the movie’s producer, Yashraj). Khan’s love affair with the box office continued with candy floss romances like Dil To Pagal Hai (1997), and Kuch Kuch Hota Hai (1998).

But the millennium began badly for Khan. His first production, Phir Bhi Dil Hai Hindustani (2000), bombed. Around the same time, Hrithik Roshan debuted with Kaho Na Pyaar Hai, which went on to become a blockbuster. People in the industry wrote off Khan. He was also accused of being insecure and lampooning Roshan in a Pepsi commercial.

“Shah Rukh was very hurt by all the criticism that came his way and most of it was unjustified,” recalls Kakkar, who shot the controversial ad which featured a Roshan look-alike being dumped by a girl who chooses to kiss Khan instead. “Khan was not instrumental in getting the whole Hrithik angle into the ad. It was my idea and he just went along with it. But the sh** really hit the fan with that ad,” adds Kakkar.

These controversies, however, did not deter Khan. Like trade expert Indu Mirani says: “Khan is not the kind of person who broods long over failures. If something does not work, he will just go ahead and try something different.” So Khan continued to produce movies like Asoka (which bombed) and others like Chalte Chalte (which became a hit). Khan, say industry watchers, also went about steadily building his audiences abroad. Between 2000-03, he spent a lot of time doing international shows. In 2007, Khan had two releases—Chak De and Om Shanti Om. Mirani estimates that Om Shanti Om did business at the box office close to Rs 100 crore while Chak De did close to Rs 70-80 crore. With that kind of success, there’s little doubt about Khan’s standing in the industry. But here is an analogy followed by a question: Amitabh Bachchan’s decline as the reigning superstar of Bollywood can be traced back to 1984-85—when movies like Giraftaar and Mard— were released. The actor was 43 years old. Khan is now 42.

Is it likely that Khan’s status as the reigning deity of Bollywood is likely to wane? Khan, who was busy with his shooting schedule, was unavailable. But people who know him are sure he is far from finished. For one, Khan has constantly reinvented himself. From a TV actor to a superstar to a TV game show host to a producer. Secondly, like close friend and long time associate Karan Johar says: “He perhaps won’t be playing college romantic hero anymore. Roles are being written specifically keeping SRK in mind. He has his own production company, so it will be natural for him to get more involved with production.” In fact, SRK is already re-inventing himself. In Om Shanti Om, he sported a new look with six-pack abs—a clear message that he was ready to take on middle age head on.

So, what does the future hold for Shah Rukh Khan? Everybody has their own take. “He is a shrewd businessman. His company Red Chillies Entertainment does special effects for other films. It also does a lot of ads. In fact, his company perhaps does more ads than my company does,” says Kakkar. Others like Mirani believe that given the influx of new ideas and talent in the industry, Shah Rukh Khan will not have to go through the ‘dry phase’ Bachchan went through. “He has started playing characters befitting his age. I won’t also be surprised if he directs a movie some day…it’s the next logical step,” says Mirani. To quote a line from Khan’s recent movie: “Picture abhi baki hai” — the movie is not over yet.
TweetYoutube