Lubricants manufacturer Castrol stayed put in this country despite unfriendly business environment which scared many others.

The Maharaja of Patiala imported the first car to enter India, in 1892. It was a Frenchmade Di Deon Bouton, powered by a steam engine. Around the same time in England, Charles Cheers Wakefield, then an employee of Vacuum Oil (which went on to become Mobil), was planning the launch of his own automotive lubricant company. In 1899, Wakefield called it a day at Vacuum Oil, rented three small rooms on the third floor of 27th Canon Street in Central London and launched C.C. Wakefield & Co. In 1909, Wakefield registered his lubricant under the brand name Castrol - the name derived from its original base component, castor oil.

Within a year, in 1910, Wakefield decided to launch his first offshore operation in India. In those days, all of India had just about 1,000-odd cars. Why did Wakefield choose a market like India for his first overseas venture? "About 100 years ago, nobody would have believed that India could become one of the largest automobile markets, but C.C. Wakefield had that foresight," says Ravi Kirpalani, Managing Director, Castrol India.

Attempting tasks where the chances of success are improbable, says Kirpalani, was always in the DNA of Castrol India. "The first improbable achievement was creating an emotional connect with a lubricant brand, but we managed to do it," he says. Indeed, Castrol is synonymous with lubricants in India. It has a 25 per cent share of the Rs 12,000-crore lubricant industry, and is well ahead of multinational (MNC) rivals such as Mobil and Shell, who have less than five per cent share each. About 50 per cent of the market is with the PSU oil companies.

Reaching out
The need to build an emotional connect with consumer s became all the more crucial for Castrol when the regulatory environment went against it in the 1970s. The government made it mandatory for all foreign companies to dilute their majority stake in Indian units. Castrol had to reduce its stake in its Indian operations to 40 per cent and also re-brand itself under a new name, Indrol. Mobil and Shell, Castrol's competitors, decided to fold up their Indian operations. 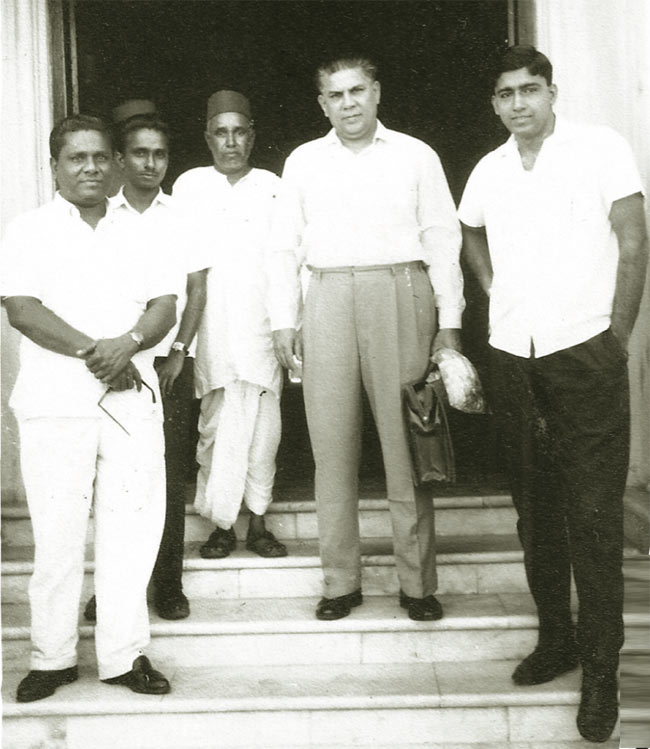 The first Indian management team of Castrol outside the then Secunderabad depot
"We were not allowed to have more than six per cent market share, and this was the time many MNCs closed shop in India and left, but we decided to stay put. This unbroken run of 100 years has got us the success," says Kirpalani.

The new guidelines also prevented Castrol lubricants from being sold at traditional retail points - the fuel stations which were owned by the national oil companies. "Since consumers couldn't come to us, we went to where the consumers were," says S.M. Datta, Independent Chairman of Castrol India. Datta is referring to the company's bazaar trade strategy, where it partnered with car and bike workshops across the country to sell its lubricants. 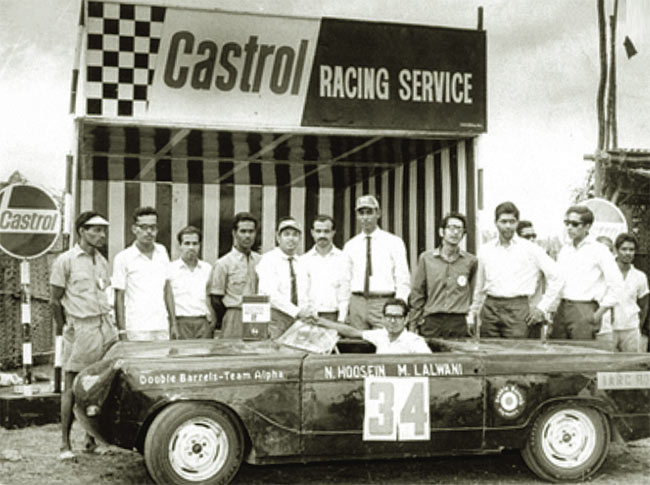 A Castrol team at one of the early motorsport events in India
Today, there are over 6,000 Castrol-branded bike workshops and 1,000 car workshops in India. Identifying new retail windows was accompanied by the launch of new products as well, such as Castrol GTX, which enabled a vehicle to run for 10,000 km without changing the lubricant, and Super TT, a lubricant for two-wheelers. "Our products were priced at a 60 to 70 per cent premium compared with the competition, but the demand was tremendous as the brand equity was already built," says Ram Savoor, former MD of Castrol India*.

Selling in Sachets
The company also used a tactic popular in fast moving consumer goods sector, that of selling in economically priced sachets. It launched 40 ml sachets of Super TT. "Consumers would buy sachets in bulk and keep them in their scooters and bikes, and at fuel stations they would use their sachets instead of buying a lubricant available there. This strategy was a huge hit," says Kirpalani.

During this time, the company also spent large amounts on advertising and consumer connect programmes. "This enabled us to build the emotional connect with the consumers, which helped us immensely when the market opened up," says Kirpalani. A 1918 Castrol ad, a year before C.C. Wakefield & Co. set up its first overseas office in India
In 1983 Castrol listed on the Bombay Stock Exchange as Indrol India. The company was able to revert to its original brand identity, Castrol, only in 1991, after the liberalisation process began in India. MNCs were once again allowed majority stake in their Indian businesses. In 1992, the parent company increased its stake to 51 per cent. "A higher involvement of the parent company was crucial, as we were not getting the full benefit of their global research and development actvities," says Savoor, the then managing director.*

It was also in 1992 that the government opened up the market and Castrol was allowed to compete with the national oil companies and other MNCs, such as Mobil and Shell, which relaunched their India operations. Staying put in India in difficult times gave Castrol a clear advantage over its other MNC competitors.

With the changing market dynamics, Castrol's thrust on expanding reach has also paid dividends. "We focused on stepping up rural distribution," says Kirpalani. The company today has as many as 125,000 outlets in the rural markets. It also invested in R&D in India and launched specialised products in the country. India became the R&D hub for the Asian two-wheeler market.

The founder of Castrol, C.C. Wakefield, firmly believed in building his business through partnerships and had partnered with motor and aviation companies to develop high quality lubricants. Over the years, Castrol has partnered with most of the global auto giants, such as BMW and Jaguar, to develop lubricants that specifically catered to their engines. Castrol ad appeared on the first BEST bus that ran in Mumbai in 1926
Castrol has carried on Wakefield's legacy in India too. Its first partnership was with Mumbai's BEST buses way back in 1919. More recently, the company has partnered with Tata Motors to develop a specialised lubricant for the Nano. It had also joined hands with Maruti in the 1990s. Castrol plant at Magazine Street in Mumbai in the early seventies
During its over 140-year history, ownership of Castrol has changed twice. It was first bought by Burmah Oil Company in 1966. In 2000, Castrol came into the BP Group's fold. We were not allowed to have more than six per cent market share, and this was the time most MNCs closed shop and went back, but we decided to stay put: Ravi Kirpalani Photo: Nishikant Gamre/www.indiatodayimages.com
Challenging times
The downturn in the Indian automobile industry has also hurt Castrol. The Rs 3,593-crore company has seen a drop in profit after tax, from Rs 490 crore in 2010 to Rs 447 crore in 2012. Kirpalani attributes the fall to the drop in auto sales as well as increase in crude oil prices, the raw material for the company. "The average cost of a barrel of oil in 2011 was $110, the highest in recent memory. We were hit by a Rs 440 crore input cost rise. In 2012, we were hit by the devaluation of the rupee by 20 per cent, which resulted in a hit of Rs 180 crore," he says.

Despite the immediate challenges, Kirpalani remains bullish on the Indian market in the mid to long term. "In the next five years India is likely to sell 50 million cars and bikes. That's incentive enough to invest more in the business and come up with cuttingedge products," he says.

*Corrections: An earlier version of this story incorrectly described Ram Savoor as former chairman of Castrol India; he is the company's former MD. The Castrol team in the picture at the Secunderabad depot was the company's first Indian management team, not the first Castrol India team. The errors are regretted.

SKF: Getting its bearings right