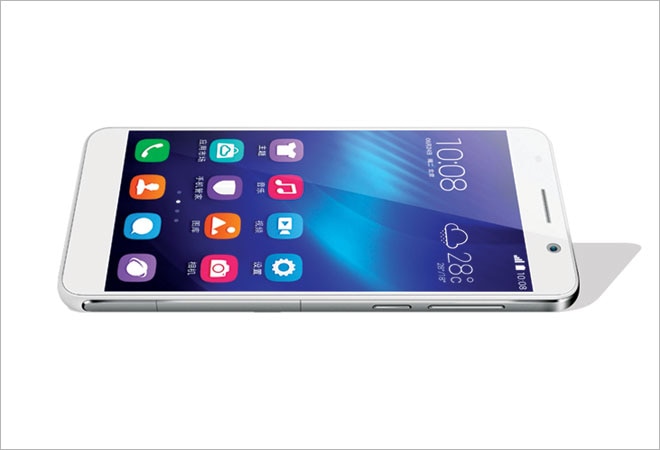 Huawei's latest smartphone Honor 6 has glass both in front and at the back, which makes it slightly slippery to hold and leaves visible fingerprints whenever picked up. Still, the grip is comfortable, and despite its 5.5-inch screen it can be operated with just one hand. The screen glass is Corning Gorilla Glass 3 with 1920x1080 pixel resolution.

Images are crisp and sharp and can be made out even under bright sunlight. Touch sensitivity is also good. There is a special 'glove mode' of increased sensitivity which makes it possible to use the device while wearing gloves.

A key feature is the presence of two rear cameras. Two cameras are not intended to create 3D images but to add depth and light to photographs, the company claims. There is a wide variety of camera settings and modes - the default camera setting is 8MP, but this can be enhanced to 13MP if desired. Photos are good quality even when taken in low light. They can even be watermarked if desired.

The device has a 1.8 GHz quad-core with a 1.3 GHz quad-core processor and is paired with three GB RAM, which makes it a snappy performer. It runs on Android KitKat operating system. The user interface can be customised, with apps placed across home screens. It has 32 GB storage and a powerful 3,600 mAh battery that lasts more than a day despite heavy usage including a couple of hours spent imaging.

Heavy graphic apps run without any lag. Switching between running apps is smooth. HD videos can be played without a hitch, making it a great multimedia device. But it did heat up after a couple of hours of running.

BAG IT OR JUNK IT: A great device, but OnePlus's One provides much the same features at a lower price
PRICE: Rs 26,499
PLUS: Performance, camera
MINUS: Price

Why you must experience the Amazon Kindle Voyage