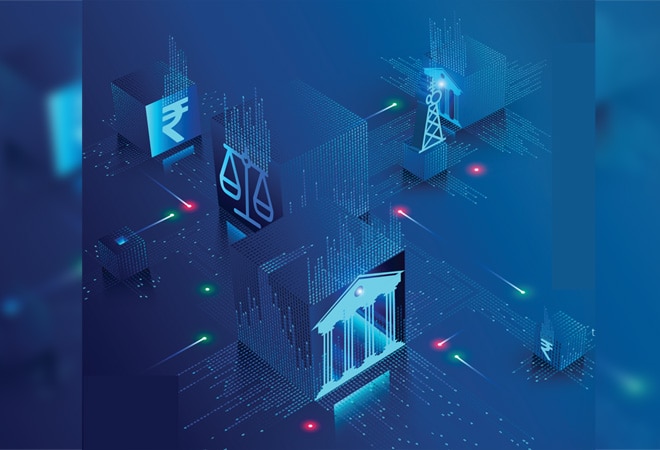 Every bank's core banking system does a lot - it records all transactions and updates customers' accounts and other financial records. But what it can't do is view a customer's relationship with other banks. A customer could submit tax relief documents (Form 15 G/H and others) at multiple financial institutions, and this poses a challenge for banks while validating the customer's tax documents. The absence of real-time reconciliation among financial institutions can lead to potential tax pilferage.

This was a hurdle that DCB Bank, a new generation private sector bank with 334 branches across India, faced. "The challenge was to verify tax certificates issued by the tax department and authenticate tax returns," says Prasanna Lohar, Head of Technology, DCB Bank. The bank thought of implementing a secure platform where the tax department, various banks and other financial institutions could collaborate and share data in real-time without compromising privacy of customers or revealing a bank's business-sensitive information. 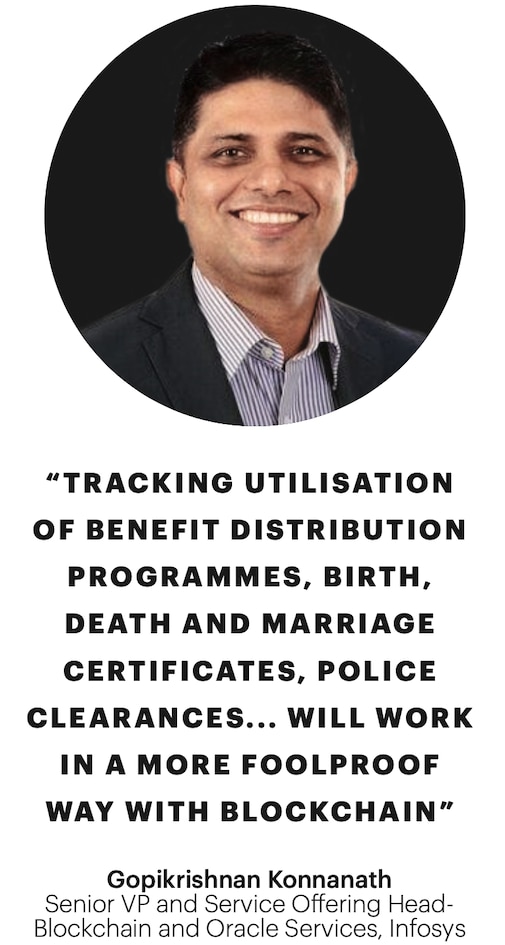 DCB approached IT major Infosys in mid-2019. The bank decided to implement a blockchain-based solution. "This has a single version of data that all stakeholders can access collaboratively. The blockchain smart contract (a self-executing contract that controls the data and makes transactions trackable and irreversible) provides a consolidated summary of an individual's transactions across financial institutions and provides a single view of certificates available to the (tax) assessing officer and deductors. This eliminates discrepancies, over-utilisation and tax leakages," says Gopikrishnan Konnanath, Senior Vice-president and Service Offering Head-Blockchain and Oracle Services, Infosys.

The DCB solution is in the pilot stage. Once it becomes fully functional, the bank will be able to collaborate with income tax systems without any impact on current workflows or processes and without compromising on security and privacy. "Also, tax authorities will be able to track income and assets information in near real-time. They will also be able to monitor the usage of rebates provided to taxpayers through tax deductors," says Lohar. "This also helps us lend confidently as income-related information provided by taxpayers is authenticated instantly over the network by authorities. We can procure online approval in real time from tax authorities when properties of corporates are mortgaged," he adds. DCB is just one of the many companies to have jumped on to the blockchain bandwagon. Recently, retail giant Walmart said it was piloting blockchain technology for end-to-end traceability of shrimp sourced in Andhra Pradesh and shipped to the US. This will help the shrimp supply chain and reinforce customer trust in the product, it said. More information can be a step towards promoting India as a preferred source of seafood, while also enhancing food traceability and transparency for consumers. Walmart has been collaborating with IBM for use of blockchain for enhancing global food traceability since 2017.

Blockchain is a shared ledger that provides high visibility. "It is an append-only ledger that is not owned by any single entity. Therefore, the system enables trust across multiple parties," says Hirak Kayal, Vice President-Cloud Applications, Oracle India. "Blockchain builds secured blocks of unaltered records linked together in a chain, distributed among all the participants." This structure allows it to be used in financial institutions, telecom, retail companies, supply chain, logistics, and more.

Subramanian Gopalaratnam, CTO, Resulticks, a blockchain solution provider, says: "Each block in the chain of transactions is immutable; this means a transaction once recorded cannot be altered or deleted. If any errors have occurred, an additional transaction can be entered to correct the error." While all records secured on a database are centralised, each participant has a secured copy of all records and all changes so that each user can view when and where the data was entered in a blockchain. Thanks to this inherent quality of blockchain, a big advantage it offers is fraud elimination. 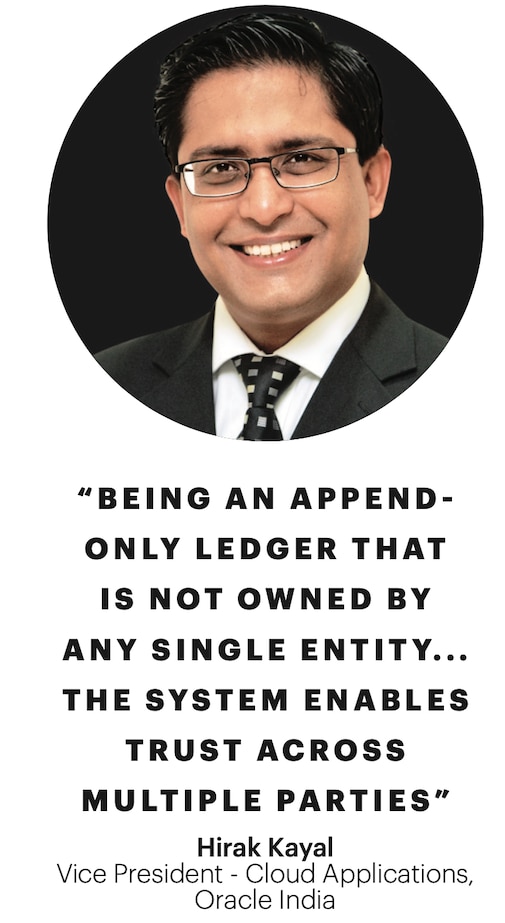 "At present, the reconciliation cost is 30-50 per cent of transaction costs in many sectors. Blockchain can eliminate this," says Gopalaratnam. It is a complementary technology so "it does not replace any system such as an ERP (enterprise resource planning) or core-banking," says David Ben Kay, Chief Legal Counsel, Pundi X, a Singapore-based blockchain company.

Decommissioning of legacy systems and infrastructure and significant reduction in IT needs helps in overall cost savings. A fintech study by Banco Santander SA (a Spanish multinational commercial bank) says distributed ledger technology could reduce financial services infrastructure cost by $15-20 billion per annum by 2022. Aggregating, amending and sharing data manually is eliminated so employees can focus more on adding value by increasing efficiency. "Since record-keeping is performed using a single digital ledger, there is no need to reconcile multiple ledgers, and the companies end up with less clutter, and more time and energy," says Kay.

As is folklore now, secured distributed ledgers were first developed for the popular cryptocurrency bitcoin. "While the idea of blockchain came around 2008, most of the industry adoption started picking pace after 2015. People became excited because of real case implementation," says Sajal Singhal, AVP Engineering, GlobalLogic, a digital product engineering services firm based in California. According to research agency International Data Corporation, the global spending on blockchain was around $1.5 billion in 2018. This is going to grow immensely in the coming years, according to experts. Gartner predicts that the business value added by blockchain will grow to slightly more than $176 billion by 2025 and exceed $3.1 trillion by 2030. In India, the market size for blockchain is much smaller. ResearchandMarkets estimates the spend on blockchain technology was $289 million in 2019 and is expected to grow at over 47 per cent (CAGR) to reach more than $4 billion by 2025.

Putting It To Work

Blockchain is an emerging technology, so its market is nascent and fragmented. Large-scale industry implementation is just beginning. The technology is suited for sectors with specific transactions involving multiple entities where the transactions have to be recorded and verified transparently. Sectors such as banking and finance, consortium banking, telecom, KYC supply chain, government, payment systems such as UPI, intellectual property, and so on, would be the ideal beneficiaries.

Banking and finance: One of the early adopters, the sector now has matured users of blockchain. Banks and financial institutions deal with a high number of ledgers. The industry is also highly regulated and risk-averse. Blockchain brings efficiency, simplicity and transparency to banking operations. It reduces the transaction time from hours to seconds, and reduces use of paper at an industry level. The banks use the technology to automate inter-bank processes like trade finance and remittances. "Blockchain's initial promise was cost reduction. But banks now rely on it to reduce risk, build stickiness within their ecosystems, and even generate revenue," says Rajashekara V. Maiya, VP, Global Head-Business Consulting, Infosys Finacle, a digital banking solution suite from EdgeVerve Systems, a wholly owned product subsidiary of Infosys.

"Blockchain-based eKYC, trade/supply chain finance and payments solutions will open up new sources of revenue for banks. Working capital finance for small and medium enterprises is a good example. Typically, an SME customer receives money after intensive scrutiny and paperwork; it takes more than 20 days for approval. Blockchain offers a secure environment to digitise, automate and approve documentation. Now, many banks have started disbursing funds against invoices of a certain value and tenor, within a day or less," explains Maiya.

In 2018, Infosys Finacle came up with a blockchain-based trade network and partnered with seven Indian banks to address their trade finance process requirements. IBM also came up with a blockchain-linked loan system for small and medium enterprises. It tied up with 11 banks, including HDFC Bank, ICICI Bank, Axis Bank, State Bank of India, Bank of Baroda and IndusInd Bank. The company is currently testing the solution.

Governance: Various government departments involving things such as revenue and land records are using blockchain. Telangana and Andhra Pradesh governments are bringing all their revenue and land records under blockchain technology. The idea is to enhance security of digitised revenue/land records. Telangana is also implementing the technology for its Motor Vehicle Department to track vehicles' lifecycle - from manufacturing to the end of the warranty period. West Bengal has implemented blockchain-based issuance of birth certificates. Tamil Nadu plans to utilise the technology for e-governance and issuing of birth and death certificates. Karnataka is planning blockchain-based certificate management for universities and colleges. "Tracking the utilisation of benefit distribution programmes, birth, death and marriage certificates, municipal authority approvals and permissions, police clearances, etc., will work in a more foolproof way with blockchain," says Gopikrishnan of Infosys. Telangana is setting up the country's first 'Blockchain district' to create an ecosystem for all start-ups and institutes working in this space.

Companies in retail and manufacturing such as apparel manufacturers, automobile manufacturers, FMCG companies and others are using blockchain for asset and supply chain tracking. Discussions are under way with companies in aviation, telecom, towers, healthcare and pharma. "The sports industry is also evolving with various use cases like crowd-funding budding sportspersons and teams," says Shinam Arora, CEO of Bangalore-based blockchain start-up Primechain Technologies. "Smart ticketing also help end counterfeit tickets."

Not a One-stop Solution

Blockchain can improve a lot of things but it is not for everyone. Many businesses overestimate the capabilities and short-term benefits of blockchain as a technology. "The answer to every business problem does not lie with blockchain. We have to first validate the market and ecosystem before jumping into a blockchain," says Chandanani of IBM. Validation starts with the use case, a problem statement and a check to see whether you can bring participants in an ecosystem together and whether the technology will make it better.

"Technology is the easiest part. Its probably about 20 per cent. The remaining 80 per cent depends on the kind of market it is, which is the toughest part," he says.

While blockchain can help in some processes that have a large amount of data, it may not work everywhere. Currently, most blockchains present in the market work in silos. So, the system is incapable of sending or pulling information from another blockchain.

Still, the industry is witnessing transformative developments on the blockchain front. Experts say that by 2023, blockchain platforms will be scalable and interoperable. They will then support smart contract portability and cross-chain functionality. When the systems are in place, Indias blockchain market will go mainstream in full steam.