Someone should set up Angry Birds' Addicts Anonymous soon.

Kushan Mitra
It has been barely a month since I took my vows of marriage. But my wife already wants to leave me because she claims I am a very asocial person. The allegation is not true even though over the past few weeks whenever I have had even a minute to spare I have whipped out my mobile handset and started playing Angry Birds.

I can't seem to help it. I am rather addicted to this simple but hugely popular game where you have to slingshot birds at pigs positioned on or within obstacles made of wood, glass and stone. The birds are angry that the "evil" pigs have stolen their eggs. So, your objective is to destroy the pigs and get the eggs back.

But in that simplicity - simple to understand and simple to play - lies the secret of this game's stellar success. Initially developed for the iOS platform for the iPod Touch, iPhone and iPad, Angry Birds has sold over 12 million copies from the iTunes App Store. And when Nokia launched its new flagship, the N8, Angry Birds on the Symbian^3 platform was the company's main pitching point to journalists.

However, it was the Android release - free from the Android marketplace-that saw cumulative downloads exceed 50 million copies, and spin-offs such as Angry Birds Seasons for Halloween and Christmas - snow is added as an obstacle - have been made. 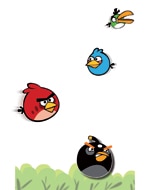 This game, by Finland-based Rovio Mobile, can be considered the biggest of 2010 - an achievement without a penny having been spent on publicity. And as far as plots go, Angry Birds is a lot simpler than, say, Call of Duty: Black Ops. The success of Angry Birds, which should make it to more traditional gaming platforms such as the Nintendo Wii and Microsoft Xbox 360 next year, does highlight a couple of things. The first is that touch-screen gaming on mobile devices can work very well. The second is that there is a lot of money in casual gaming. The best thing about Angry Birds is that it can be played by just about anyone. I downloaded the game onto an Android device to keep my five-year- old niece occupied. Then, I was hooked. The learning curve is smooth and it is great fun to play.

At many start-up conferences in India, companies talk about setting up the next Facebook, not realising that Facebook does the job it is supposed to do quite well already. I believe the big money lies in making a good, enjoyable game. Constant Internet access and touch screens have transformed mobile devices, and although Angry Birds cost an estimated i100,000 (Rs 60 lakh) to develop, the pay-off has been manifold.

There is serious talk of an Angry Birds movie in 2011. And if it is as much fun as the game, it could be the biggest blockbuster of the year.