Technological advances are transforming the lives of the physically challenged.

A remarkable achievement of technology has been the way it has transformed our lives in the past decade. Today, you can search up a good Chinese restaurant in your neighbourhood simply through a voice command on your phone.

'Voice search' might seem a nifty trick to many of us. But voice search is not just the capacity of a phone or a computer to take down dictation, or to read aloud text messages received. In its recent, most sophisticated form, it gives the device on which it has been loaded the ability to communicate verbally with the user. In the last two years or so, voice search has gone beyond basic voice recognition into much more complex functions. 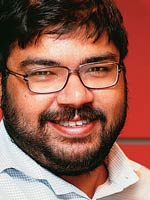 Kushan Mitra
And this really makes a difference to those who cannot use a computer in the ways most of us do: by typing, pointing and clicking, or of late, touching the screen.

Consider the visuallyimpaired. Thanks to voice recognition and, more importantly, voice cognizance technologies that are now available on more and more devices, life is becoming a tad easier for them. Some of us use speech-totext software to get text messages read out to us while we are otherwise engaged - while driving, though that is not an entirely safe practice. Or we use voice recognition software to dictate a reply to a text received. But for a blind person, voice cognizance technology means that he/she can finally start using text messaging for the first time.

Or take Microsoft's Kinect technology for the Xbox 360. The 'gesture recognition' technology - initially developed by PrimeSense, an Israeli start-up - enables users to interact with the Xbox simply by making gestures, without ever touching a game controller. This provides a way for certain categories of special needs children to engage with such devices, and can possibly even help them integrate better.

There are documented cases of special needs children using Kinect to play with the Xbox, competing with other children and adults, videos of which can be viewed on YouTube.

Thanks to what some misguided souls may call 'vacuous gaming software', communicating with special needs children and even enabling them to have fun, has got easier. There have also been major breakthroughs in the world of hardware.

Increasing miniaturisation of parts has brought about tremendous improvements in cochlear implants for those with decreased hearing or no hearing at all. So too, while a complete artificial eye has yet to be created, the 'embedded' contact lens circuitry that can create a bionic eye - seen in the recent Tom Cruise-star rer Mission Impossible: Ghost Protocol - exists, though in a world far removed from the secret government agents shown in the film, The bionic eye is still far from perfect. But hopefully, one day, artificial eyes will be created.

Advances in both electronics and materials technology have also made possible an incredible array of highly advanced prosthetic limbs. South African Oscar Pistorius, the man known by his moniker 'blade runner', has no legs, but can run faster than all but 50 other humans on the planet who possess both legs. Pistorius was a baby when both his legs had to be amputated.

So, technology has not only made the average individual's life easier, it is also transforming the life experiences of those who earlier often lived on the sidelines. Complain as some of you might about the technological era and its discontents, this is one fact you cannot deny.
Published on: Feb 02, 2012, 12:00 AM IST
Posted by: Navneeta N, Feb 02, 2012, 12:00 AM IST