With the rise in Cloud adoption, data generation and emergence of data-as-a-service model, data centre business in India is not just growing big, but also emerging as the new real estate asset class

On the morning of October 12, at around 10 a.m., power supply lines broke down in Mumbai for hours, crippling city life. Thousands were stuck inside local trains, telecom and internet services went down, and work from home (WFH) took a massive hit. But for one sector, it was business as usual. Data centre operations continued to function normally across the city, also known as the data centre capital of India. Sunil Gupta, CEO of Yotta, a Tier IV-certified data centre, said in a LinkedIn post that when the power outage occurred from the utility side, diesel generators kicked in automatically and started powering the server racks as well as chiller/cooling system and all other support loads. "To keep the building operations uninterrupted, we have 600,000 litres of fuel stored in underground tanks that can keep us running for 2 continuous days (48 hours) at full load and for much more no. of days at partial load."

Driven by the cheapest data prices in the world, low-cost smartphones, internet penetration in rural areas and video consumption, India's data centre market has always been a favourite among global players. The pandemic has added further to the demand.

For long, the Indian co-location landscape - the practice of housing privately-owned servers and networking equipment in a third-party data centre - has largely been dominated by homegrown players, including Sify Technology, CtrlS, Nxtra Data and Netmagic. Global vendors were taking the inorganic route to strengthen their footprint. In 2012, Japan's NTT Communications picked up 74 per cent stake in Mumbai-headquarter Netmagic Solutions for nearly $128 million, and mopped up the rest a few years later for another $35 million. Recently, NYSE-listed Equinix acquired India operations of GPX Global Systems in a $161-million deal, which is expected to close early next year. 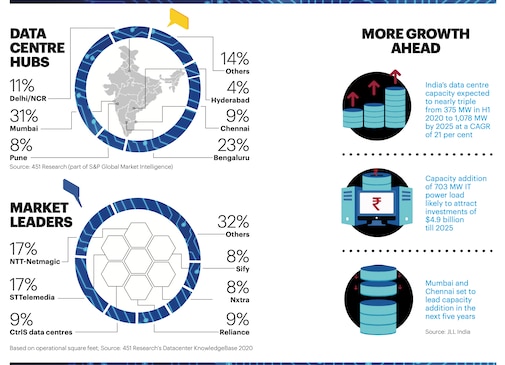 While Covid has acted as a catalyst in Cloud adoption with organisations betting big on their digital transformation strategies, factors such as ballooning data consumption led by video and social media platforms, rise of OTT platforms and e-commerce, have accelerated the trend. Rishu Sharma, Principal Analyst, Cloud and AI, IDC India, says the Covid crisis has accelerated private Cloud adoption. "There is also a lot of emphasis from organisations on hybrid IT environment? Government initiatives and data localisation laws are also playing a part in accelerated Cloud adoption," she adds. Cloud refers to data centres that host the physical infrastructure for computing (racks/cabs) at secure locations and provide access to customers from any location to store, process and disseminate data.

"Data centre business today cannot be and is not a standalone business. The interconnection between data centre and the Cloud world has become very important," says Kamal Nath, CEO, Sify Technologies. Large global hyperscalers - the dominant companies in Cloud services and social media - such as AWS, Microsoft, Google, Facebook and Oracle are looking at collaboration rather than competition, resulting in a win-win for both. "We provide data centre space and services with our own set of Cloud offerings," says Nath. With operational flexibility becoming more critical for businesses, there is also an increasing adoption of infrastructure-as-a-service. Yotta Infrastructure, a subsidiary of the Hiranandani group and a recent entrant in the business, says five years ago, a typical enterprise customer would at least look at a one-three-year contract period with exit clauses. According to CEO Gupta, public Cloud service by design does not see long-term lock-ins. However, serving hyperscalers as co-location customers is a long-term play. "They typically ask for, say 500-1,000 racks, and sometimes even dedicated data centre buildings," he adds. "Such customers look to stay for a long period of time and these contracts are typically long term-deals (5-10 years) with very strict exit clauses."

The recent instance of power outage in Mumbai that caused a massive slowdown in banking applications and systems, with several reports of stock traders not being able to complete transactions, justifies newer investments and upgrades in establishing Tier IV type of data centres with almost 99.9 per cent reliability (Uptime). Data centres are generally divided into four types - Tier I, II, III and IV. The classification is based on metrics, including electrical path for power, uptime guarantee and cooling capacity. In Tier IV, every facility is N+N (1 +1 back up of all facilities) and the cost of running such centres is more than four times the normal ones, says B.S. Rao, Vice President, Marketing, CtrlS. "In our case we charge our customers Tier III rates while providing Tier IV services. We have dual fire fighting and N+N power lines. We pursued the government for nearly six months to get approvals," he adds.

The increase in global cyber attacks have also made customers more demanding. "Nobody can say you are 100 per cent protected from an attack," says Sharad Sanghi, CEO, Global Data Centers and Cloud Infrastructure, NTT Ltd. NTT Netmagic uses AI-based automation to detect and warn of breaches along with dedicated threat management teams to respond to an attack.

A recent report by CRISIL research also suggests that players in the data centre business are seeing improved profitability. Operating margins of the top 11 companies have improved to 23 per cent in FY19 from 18 per cent in FY15 due to higher utilisation of facilities, leading to positive operating leverage. Even net margins have climbed up from 2.5 per cent in FY15 to 6.9 per cent in FY19. "This is because majority of the costs for the business are upfront in nature and gradual ramp-up of racks leads to higher incremental revenue for players," according to the report.

Though Indian data centres account for 1-2 per cent of the global pie, according to a Crisil report, it is estimated to have clocked a modest CAGR of 15-20 per cent since FY16 to touch $1 billion in FY19 and $1.2 billion in FY20. With Covid accelerating data consumption, there has been a 38 per cent year-on-year rise in the first quarter of FY21. The industry is expected to register a 25-30 per cent CAGR to reach $4.5-5 billion by FY25.

According to a report published by 451 Research, a part of S&P Global Market Intelligence, NTT Netmagic is the market leader at 17 per cent in terms of operational square feet, followed by ST Telemedia and CtrlS. There are 150-155 data centres in India, according to industry estimates and nearly 60 per cent of them concentrated in Bengaluru, Mumbai, Delhi-NCR and Chennai. Together, they make up for over 70 per cent of the information load. In terms of capacity, Mumbai alone handles close to 40 per cent of the installed capacities, given less power outages and better connectivity. The massive demand has also triggered setting up of new facilities . For instance, Amazon has announced an investment of $2.8 billion in Hyderabad to set up its second Cloud data centre. Recently, the UP government approved Yotta Infrastructure's data park in Greater Noida at an investment of Rs 700 crore. The Maharashtra government has also signed MoUs with seven data centre operators, including NTT Net Magic, Nxtra, Adani Enterprise, STT Global Data Centres and COLT, to set up new facilities in the state.

Real estate services firm JLL India's report on data centre says capacity is expected to increase from 375 Megawatt (MW) in the first half of 2020 to 1,078 MW by 2025, growing at a CAGR of 21 per cent. "Expected capacity additions of 703 MW will translate into 9.3 million sq. ft. of space, which will open up greenfield investment opportunities for real estate developers and investors," says Ramesh Nair, CEO & Country Head, JLL India. Mumbai is expected to continue as the preferred destination for large Cloud players.

The rise in non-metros serving as smaller hubs, or 'Edge Data Centres' once 5G is rolled out, could act as the game-changer. NTT's Sanghi believes applications on augmented and virtual reality or those sensitive to high latency where even a few milliseconds from the end user to the data centre might be too much, could shape the future of Edge centres. "Over the next few years, we will see smaller data centres close to end users, which will allow them to enjoy multi-experience applications where chat, voice, wearable, AR, VR are run." However, all these may not be greenfield investments. With Edge centres typically viewed as webs of network to mange load and latency, "there is unlikely to be any fresh greenfield data centres (Edge). There will be telecom operators with existing assets with power, cooling systems and additional clean space for racks to expand infrastructure," adds Sanghi.

The Ministry of Electronics and Information Technology has released a draft of the proposed Data Centre Policy for public consultation. The policy aims to provide infrastructure status to the sector and incentivisation schemes for promotion of Data Centre Parks or Data Centres. According to the draft, the government plans to set up at least four Data Centre Economic Zones (DCEZs) in the country, as a Central scheme. "These DCEZs would create an eco-system of Hyperscale data centres, Cloud service providers, IT companies, R&D units and allied industries," the draft reads.