Facial recognition technology will be password to the future

Joel Rai
If you own an Android phone, you must surely be aware of a unique unlocking process in the recently released Ice Cream Sandwich version (v4.0). You need only stare at the screen of your locked device, and it comes to life all by itself. The frontfacing camera of the device scans your face and references it to the image you created while setting up the security process. If there is a match, the phone unlocks on its own. 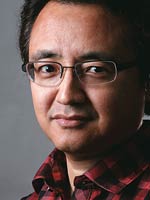 P Joel Rai
By making face recognition an optional security feature, Android Ice Cream Sandwich has followed the growing trend of using human attributes as passwords to allow access to private information. Face recognition science is neither new nor is it perfect yet. The first attempts to pinpoint a set of unique markers for each face were made in the 1960s. But the technology has got better now, with experts reporting 90 per cent accuracy.

Be it basic face detection - a widely used feature in compact cameras - or more detailed scrutiny, used in national security and policing, the process is the same. A face is scanned by a computer or a device, broken up into structures and measurements - such as skin colour, distances between the various parts of the face, etc - and these peculiarities are then compared to those in a database.

ALSO READ: How to root your Android device

If the infobank has a corresponding set, identification is achieved and locks spring open. Like Androids, Toshiba laptops too sport this feature. The webcam stares at you to ascertain it is indeed you who wants to access its data treasury. Apple uses face recognition in its iPhoto service and is now patenting a new 3D system that it might use as a lock breaker in future iOS versions. Samsung's latest TV lets a recognised face access apps and the face owner's Skype account.

A couple of years ago, I came across a prototype monitor in Singapore that used face algorithms to determine whether the person in front of it was a man or a woman. The science that went into this has in all probability inspired Intel's proposed set-top box, slated for release at the year-end, which will identify the couch potato as male or female, child or adult, and stream appropriate advertisements on the TV. Apparently, service providers are not too happy at the prospect as they fear advertisers may baulk at their products being separated into four narrow - and at times, inappropriate - channels.

Recently, Facebook, which has over 65 billion images in its database, announced it would make facial recognition a default feature. Using the same tags people use to identify faces in photos uploaded on the site, Facebook will be able to name people whose pictures are put up on its walls and albums. The scary thing is that you are likely to be identified not only by your friends but just about anyone. Suppose you see a pretty girl at a mall and decide you would like to know her name, whether she is single, and so on. All you need do is take a photo of hers with your mobile phone and load it on Facebook. In an instant, a name will be suggested.

And though the networking site gives you the option to uncheck yourself from this feature, it does not mean that your face is erased from its system - the database continues to silently track your face in any picture uploaded on the site.

Whatever the ethical debate, face recognition is an inescapable part of the future. Sure it threatens your privacy, but it will also secure your phones and laptops, stop intruders from entering your home, and catch disguised terrorists.