With citizens struggling to access e-services across different bodies, departments and states, the government is working towards one seamless portal

The government's big plans to develop one seamless portal for citizens' need.

The numbers are impressive: As of October 2021, more than 1.3 billion Aadhaar cards had been issued to residents of India; monthly digital transactions on the Unified Payments Interface (UPI) were in excess of $100 billion as of November; and over 100 million unique DigiLocker users had uploaded 5 billion documents as of March 2022. The numbers would suggest that India is going digital with a vengeance. And citizens across the country have logged on to government-provided e-services. While Indians in general have taken to e-services as ducks to water, they’re struggling to negotiate the labyrinthine maze of multiple portals, repetitive registration processes for various services, and uploading the same credentials again and again.

The government is aware of its citizens’ pain and is working to ease it. “The data has lived in silos in the past. And the government is looking to integrate everything together,” assures Abhishek Singh, CEO of Digital India, who was recently appointed the CEO of the National e-Governance Division (NeGD) under the Ministry of Electronics & Information Technology (MeitY). By integrating services on a common architecture and interlinking databases, he says, “we should be able to go to this era of proactive delivery of services without the citizen... running from app to app or portal to portal”.

For FY23, MeitY has set aside Rs 525 crore for e-governance; in the last fiscal, it had revised upwards its spending from nearly Rs 405 crore to Rs 535 crore. And for Digital India, the government’s flagship programme that aims to transform the country into a digitally empowered society and knowledge economy, the current fiscal’s allocation is a shade above Rs 10,676 crore (including Rs 5,300 crore for the production-linked incentive or PLI scheme for large-scale electronics and IT hardware); for FY22, the overall allocation was Rs 6,388 crore.

The ultimate goal of the government is to bring everything under one umbrella, where citizens can access multiple services from a single interface. And once details are entered into the database, the citizen will not have to submit them again. The government has identified key areas that will help it build an integrated portal. 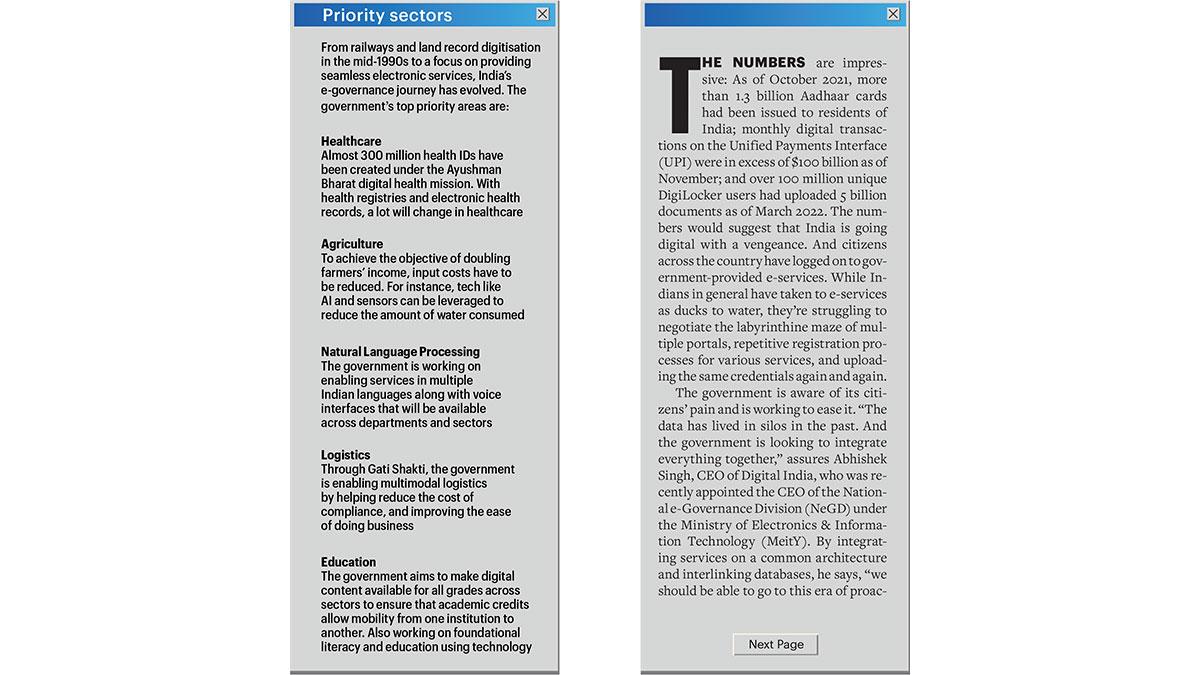 “While in a majority of departments, state and central government services are available online, the effort is to ensure that ‘all’ the services are available online in the near future. And given how every department stores data in silos, the next priority under the e-governance mission is to interconnect all of them,” says Singh. The aim is also to ease the citizens’ experience by eliminating the need to submit the same documents time and again. “If the government already has your [credentials in the] database, there should not be a need to submit them again,” adds Singh. While the government’s approach is to integrate these services, this in itself is complicated and would require a lot of work. For instance, every department will have to standardise the format in which they enter data, say, the citizen’s name or date of birth. Industry experts say that another big challenge for the government would be the unwillingness of departments and states to share data with the central government/authority.

With every government department and state designing its own app, an open-source platform could be the way to go. Work has already started in this area with DIGIT, an open-source platform and API, which developers, enterprises and citizens can use to build new applications and solutions. “The idea remains to build reusable, scaleable, extensible and deployable technology products using open-source tools,” says Gaurav Goel, Founder and CEO of Samagra, a consulting firm that works exclusively with the central and state governments across sectors from formation to execution of e-governance tools.

This approach helps the government utilise the community of open-source developers to build better solutions. “Open source has resulted in coming up with robust solutions, and ensuring that the cost of running a solution and the cost of lock-ins to a proprietary software is reduced,” says Singh, brushing aside any security concerns, since some open-source software are considered to be more secure than proprietary software. In fact, the government has been using open-source platforms for some of its major projects such as Aadhaar, DIKSHA, DigiLocker and Aarogya Setu, among others.

Another top priority for Singh is to ensure data security. “If citizens are accessing online services, they should not be subjected to any kind of loss of information or pecuniary loss,” he says. While the government is working on India’s data protection law, the government’s Meghraj (cloud policy), which was adopted a few years ago, provides some direction. Under this, says Rajesh Awasthi, Vice President & Global Head of Managed Hosting and Cloud Services at Tata Communications, the MeitY empanelled cloud providers nearly five years ago and looked at three variants of cloud services, with the first type being public cloud services. “The second one, they stated, was a virtual private cloud, which you can build on top of a public cloud. And the third one was for very critical data, which they would not want to put on a public cloud; they would want to put it on a government community cloud,” he explains, adding that the third type would be a multi-tenant environment, which would be physically and electronically separate, or a cloud node exclusively accessible for the Government of India and PSUs. As part of the Meghraj policy, very critical data would be deployed at the NIC data centre. 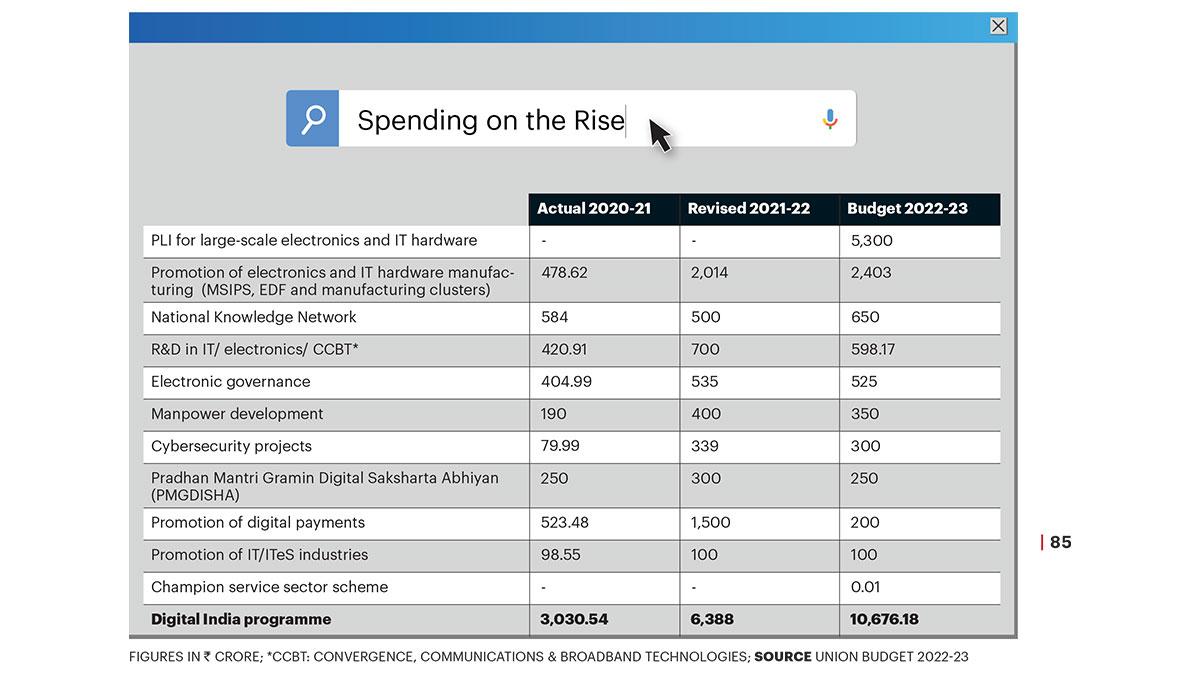 For e-governance to work in any country, connectivity is important. India has done brilliantly with 834 million users accessing mobile data in 2021, as per Statista. Through the BharatNet Scheme, the government aims to provide broadband connectivity at an affordable cost in over 600,000 villages by 2024, of which some 280,000 villages have already been connected. Rahul Rishi, EY India Consulting GPS Leader, says that people use digital services either using mobile connectivity or digital broadband. “Digital broadband, if I take on a scale of 100, is 1.6 per cent. That means, the entire population, to connect to digital services, is now leaning towards mobile connectivity,” he says, adding that the biggest challenge could be that mobile towers—with only 33 per cent fiberisation—still restrict full utilisation of their network capacity, which could become a bottleneck while carrying so much information.

The other aspect of the digital divide and a barrier to e-governance could be language. For e-governance to be successful in the country, a majority of citizens should be comfortable accessing these services. For this, the government plans to make all e-services available in multiple Indian languages, along with a voice interface. This will ensure that citizens who are not digitally adept and who cannot navigate a website or a portal can access it easily. “Just the way we use voice assistants such as Siri and Alexa to fetch information, the government aims to empower citizens with voice-enabled e-services in multiple Indian languages,” explains Singh.

Another area the government needs to address is communicating well with citizens. All the good work the government does goes in vain when citizens are not able to leverage the service because they are not even aware of it. Take, for instance, MeitY’s Umang mobile app. This unified app has been envisaged to make e-governance ‘mobile first’ by offering pan-India services from the central, state, and local government agencies on the app, web, SMS, and IVR channels. However, not many are aware of the app, and it has been downloaded from the Google Play Store only a million times. For context, 90 per cent of India’s smartphone population is on Android. Similarly, there exists a Centralised Public Grievance Redress and Monitoring System portal where citizens can lodge their grievances related to service delivery covering all ministries and departments of the Government of India and states to public authorities, and the portal is monitored by the Prime Minister’s Office. While it has its dedicated app ecosystem, it has also been integrated with the Umang app.

India climbed 11 ranks to reach 107 in 2014, and another 11 ranks to reach 96 in 2018 on the United Nations E-Government Development Index. But since then, it slipped four places to be placed 100th among 193 UN member states in 2020, when the rankings were last published. The list is led by Denmark, the Republic of Korea and Estonia, followed by Finland and Australia, among others. South Asian nations such as Singapore and Thailand are also ahead of us. Industry experts say that while a lot of good work is being done, e-governance in India still has a long way to go.