Do not underestimate the power of the human brain

Do not underestimate the power of the human brain.

Joel Rai
If your brain was a gadget, how many megabytes would you rate it at?

We live in a world obsessed with technology markers. When we buy a tablet, a smartphone or a camera, our minds keep juggling numbers: gigabytes (GB), megapixels (MP) and gigahertz (GHZ) respectively. We believe a laptop with a 4 GB RAM or a smartphone with a 2.0 GHz processor or a camera with a 16 MP sensor is the best in the business. The figures represent how far we have advanced technologically.

But do we need such capabilities? The human brain keeps conjuring up newer gadgets that wow the world. But remember - yes, gawp if you must - the same human brain sent man to the moon four decades ago with an unbelievably minute fraction of the computing power our gadgets sport today. Apollo XI, which landed Neil Armstrong on the moon, was guided by a computer that had, what in today's terms would be a two-kilobyte (KB) memory and 32 KB storage. 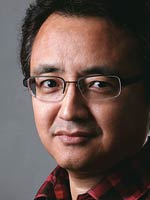 Joel Rai
How did they pull off such a stupendous task with specs like these? I guess it was just ingenious use of available resources. So while most of us do not really need a quad-core processor in our phones for the work we put them to, we still pore through the marketing spiel for such a specification. And most of us know that we do not really require our cameras to have a 16 MP sensor - unless we are in the advertising business that calls for wall-size photo prints. For the kind of photos most of us take, those we share on social media networks, or use for an occasional portrait print, a three MP camera suffices splendidly. But we hanker after the numbers, propelled in part by marketing myths that new benchmarks indicate better, faster, bigger. They may, but they are also beyond our everyday needs.

Back to the query in the first line. How many bytes would the human brain that conceives of all these GBs and MPs itself rate? There is no irrefutable answer to that. But scientists say we can extrapolate the memory power of the brain (in mechanical terms) from its biological attributes. There are around 100 billion neurons in the brain, each capable of a thousand data points. That would give us a data capacity of around 100 terabytes (TB). Experts say depending on how the body uses these capabilities, the average human brain could have a cache of 10 to 100 TB of data. To put this in perspective, a 100 TB memory can store around 25,000 DVD movies or 25 million songs.

Two more points about the brain as a gadget are worth noting. It is definitely slower than a manmade computer. Take even the very basic calculator in your mobile phone. Multiply 242 by 26. Your brain can come up with the answer, but the calculator, using reverse engineered processes, does so many times faster. In a data crunching race, a neuron would lag about a million times behind a laptop with a one GHz processor. In its defence, the brain could say it is probably the most environment-friendly computer around. According to experts, the entire brain runs on around 12 watts of energy. A computer with the brain's configuration and multitasking abilities would probably require the power needs of an entire town.

So now you realise why it took the full length of the movie, The Bourne Identity, for amnesiac Jason Bourne to regain his memory. After all, there was around 100 TB of data to be retrieved from the recycle bin.