Freedom on net comes with responsibilities and reasonable restrictions

The problem with many of us who think access to the Net is our natural right and any attempt to stop us from doing so is a violation of our freedom of expression.

Joel Rai
In France, Spain, Greece, Finland and Estonia, access to the Internet is a human right. This fact is indicative of the value that modern governments place on the ease with which citizens can get their hands on data and information. Most of us would like to have it that way since the Net also facilitates networking and exchange of information.

Certain events recently, however, would have you sit up and take notice of things that you usually wouldn't associate with Facebooking or Tweeting. The Net was being used - or abused, depending on your perspective - to spread doctored pictures and incendiary messages to provoke social unrest in India. The government - ever wary of, even paranoid about, the damage to the country's image, economy and society by communal upheavals - quickly stepped in and asked a couple of sites to black out some of their users. 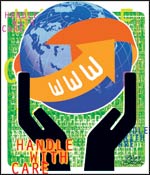 It was back to the debate on the censorship of the Internet . Those in favour of an open, always-accessible Net conjured up images of a police state and repression of freedoms and rights. Others who saw how the Net could be manipulated for malicious gains had justifiable worries about a digital behemoth that could potentially wreck a nation.

So, can the Net be censored? Well, simply put, no. It cannot be completely chained because of its nature. Should it be censored? Now, this question is not that easy to answer. Even Sir Tim Berners-Lee, inventor of the World Wide Web, had his own supplement questions when asked whether the Net should be controlled. At the India Today Conclave last year, he wondered who could be asked to keep tabs on the Net. Large corporations? Governments? An international court? "I can't give you an answer to this," he finally said, but did suggest a system of checks and balances. Joel Rai
I asked Pavan Duggal, well-known Supreme Court lawyer and India's foremost authority on cyber laws, whether the existing legislation could deal with issues of the sort that arose after the skirmishes in Assam and those that triggered an exodus of sorts from the cities. According to Duggal, there is an urgent need to amend the provisions of the Information Technology Act, 2000, to come up with appropriate mechanisms that are needed to effectively tackle the "newly emerging challenges of misuse of mobile and cyber networks".

Like most of us, Duggal, however, is not in favour of someone holding absolute power over the Net. He feels that it is unnecessary to use a sledgehammer when a scalpel can do the work. "The best way to deal with the situation is to adopt a balanced approach while protecting the rights to freedom of speech and expression." This echoes Sir Tim's feelings and much of ours, and can be achieved, says Duggal, with "a multidimensional approach and innovative use of technology, social media and the Internet".

The problem with many of us who think access to the Net is our natural right and any attempt to stop us from doing so is a violation of our freedom of expression, is that we do not realise that all rights come with duties. If the Indian Constitution provides for fundamental rights, Article 51A also reminds citizens about some fundamental duties. Similarly, if we are to enjoy freedom of the Net, we have to concede that such a freedom will come with some duties. It is when users do not comply with these self-regulatory responsibilities that the question of the need for an enforced discipline arises. But if all Facebookers and the Twitterati, not to forget the SMS senders, are conscious not only of their right to expression but also of the fact that the exercise of this right could be violating someone else's, then there would be no need of laws to filter content on the Net.