One-piece PC, with monitor and CPU merged, may be the rage soon

An All-in-One is a monitor that has an in-built CPU, which was traditionally a separate entity. It is a complete computer - powerful enough to woo enterprise users, and affordable enough to interest home users as well.

Nandagopal Rajan
Three years ago I assembled my last desktop computer. Now I regret not having spent some more money to buy an All-in-One (AiO) instead. An AiO is a monitor that has an in-built CPU, which was traditionally a separate entity. It is a complete computer - powerful enough to woo enterprise users, and affordable enough to interest home users as well. It saves space, which is the primary reason for picking it up. It also has just one power cord in the entire set up. It is high on style and convenience too, much like the legendary Apple iMacs. 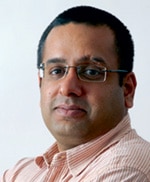 Nandagopal Rajan
Perhaps, back in 2010, it would have been an indulgence to buy a compact AiO, since one would, at the time, have had to compromise on processing power and storage, despite paying a premium for the device. But in the past year or so, the AiO has evolved a lot. It runs high-end processors and has tonnes of storage, while still being a single-wire space saver. It even does stuff a conventional desktop cannot, such as bringing in a touch screen and transforming into a TV if needed. The touch screen makes it ideal for the new Windows 8 platform where you don't always need the keyboard for input, while the TV option will delight those who don't believe in keeping multiple gadgets all over the house.

Sandeep Aurora, Director, Marketing, Intel South Asia, believes there is no reason to keep the AiO away from the home user. "It is the ideal shared device and has now become affordable too," he says. The cheapest AiOs from Lenovo now come for as little as Rs 21,990, though the specs in this model are of a kind more suited for families buying their first computer. But there are options available across a wide price range, going up to the topend iMac and the Lenovo A720.

The AiO is already the fastest-growing segment among computers with a compound annual growth rate of roughly 30 per cent. At 245,000 units, the AiO market in India will be about 17 per cent of all desktop sales in the country in 2013, according to industry estimates. In 2012, it was 11 per cent at 185,000 units. No wonder more manufacturers are entering this segment with multiple product offerings.

Moreover, since an AiO has just one component, it consumes much lesser power. In a country like India this means that while a normal desktop can work a maximum of 15 minutes on the UPS, the AiO can run for a three times longer duration. It is also trying to become a single entertainment and connected computing hub for the home with technologies like OneKey TV that turns the HD display of an AiO into a TV at the click of a button.

But don't expect any AiO to have a screen bigger than 30 inches, for that will make it useless as a computer. Still, there are some disadvantages with the AiO, especially when it comes to upgrading it. The form factor does not make it conducive for users who like to tinker with their machines and upgrade parts regularly. But there are exceptions in this respect too - models like the HP Z1 workstation have a toolless chassis model that allows easy upgrades and has the lowest downtimes.

The big drawback could be the fact that the AiO cannot still take the kind of computing which leads to extreme heat dispersal, such as high-end gaming. But that is very much a niche category. To repeat what I have said in earlier columns: the desktop is not dead, but it is facing increasingly stiff competition.

Chandrahas Panigrahi, Country Manager, Consumer Business, at chipmaker Advanced Micro Devices India, thinks this form factor will become the future of computing as soon as its price difference with the traditional PC narrows a bit more. If you ask me, the gap has already reduced. There is no reason now for me not to upgrade to an AiO when my desktop reaches the end of its life.