Unlike traditional advertising, social media allows people to grade brands and advertisements by clicking the 'like' button if they want to. From poetry to personal attacks, social networking professionals face it all to manage real businesses while promoting brands.

Dearton Thomas Hector/Manasi Mithel
Car died while on the road? Call dropped? Food served on your flight tasted like cardboard? Go ahead and complain on Facebook or Twitter. Increasingly, customers are turning to social media platforms to make companies accountable for lapses in service.

In turn, many companies have hired special handlers to respond to irate online messages. "Social media matters now, thanks to the increasing number of people on Facebook and Twitter and the rising volume of their conversations," says Rajesh Lalwani, Founder of Blogworks, a Delhi-based social media consultancy, whose clients include Samsung, Madura Garments. Companies are spending more and more of their marketing budgets on digital media, sometimes as much as 10 per cent, he says.

It is estimated that the total digital spend by Indian companies is over Rs 2,000 crore, and about half of that is on social networking sites. "Our spending on online activities has doubled this year and social media is an integral part of it," says Mohit Beotra, Head of Brand and Media, Bharti Airtel. Digitas India's Vikram Alva (fourth from left) with his team
For the professionals hired to handle feedback from social networks, a day in the office means wading through streams of online abuse, weathering occasional impromptu marriage proposals and even praising customers' doggerel. "It is all about having a dialogue with your customer," says Deeptie Sethi, Head of Communications, Ford India. "Handling social media accounts is like nurturing your baby."

Sethi played a key role in the launch of two major Ford India online campaigns in the last two years. One of them, a Facebook page dedicated to the new Ford Fiesta, garnered 139,960 "likes". It had a video link that, when clicked upon, sent viewers to a web site that showcased the experiences of four drivers taking the wheel of a Fiesta.

Unlike in traditional advertising, where target customers can only flip past print advertisements or sit through television commercials, social media allows people to grade brands and advertisements by clicking the "like" button if they want to. If they "like" a page, the decision is broadcast to all their friends, expanding the brand's reach.

Sumana Samuk, 24, is a senior content associate for social media with Bangalore-based digital marketing firm, i-Vista Digital Solutions, which handles Twitter and Facebook for SpiceJet, the low-cost airline company. Working in an emerging field like social media marketing is a welcome challenge, she says. Her team manages to respond to 99 per cent of the tweets and wall posts SpiceJet receives. That does not mean they respond to everything.

"We once got a tweet saying that seats on Kingfisher were better than those on SpiceJet. We logged this complaint but we didn't respond to it," Samuk says. "For every complaint we have a set process," says Blogworks's Lalwani. "We try to anticipate every possible reaction and keep a process ready. It is not enough to merely reply to a complaint on a social networking site. For us, the problem does not end until a solution is found. To do that you need to have the right mechanism."

Airtel's social networking team always gives complaining customers a timeframe by which the company will revert.

The social media marketer's task is a demanding one. Apart from developing a thick skin, it requires being constantly plugged into the web. Samuk's team works 24x7. "There are two people who work in round-the-clock shifts to manage the traffic on our system. After an 11-hour shift, I leave the office by 7.30 p.m. I log on again once I reach home," she says. Clemens Ollmert (second from left) Head of Marketing, Audi India, with his social media team
A journalism graduate from Mount Carmel, Bangalore, Samuk tries to blend her writing skills with her passion for online media. "I have spent five to six years in the online space indexing web sites on Google, working on creating web sites and so forth. But social networking works in real time and this excites me," she says.

Vikram Alva, Senior Vice President at digital marketing firm Digitas India, studied engineering and then pursued an MBA before turning to social media because, he says, it allows him to be creative. "Social media allows brands to interact with consumers who are actively seeking out brand experiences," he says. Digitas India handles the Airtel soccer account, which has received 400,000 "likes" so far.

Companies are getting increasingly innovative. When Audi India held its golf tournament for the Audi Quattro Cup earlier this year, says Clemens Ollmert, Head of Marketing, it provided live tweets of the contest on Twitter. And while Facebook and Twitter are the most popular choices for companies, some have gone beyond. 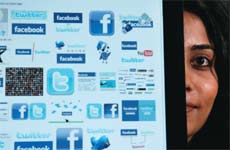 24x7 effort: Sumana Samuk, i-Vista Digital Solutions
The first company to use LinkedIn in India, for instance, was Volkswagen, which released a series of advertisements on the site that had LinkedIn members endorsing their favourite Volkswagen model. Lalwani feels marketers should look beyond Facebook and Twitter. "Social media is about handling real businesses," he says. "It is about facing challenges in this space and coming up with different business goals to engage the brand's stakeholders."

Sometimes customers can get a little too attached to the person responding to their messages. Samuk says a customer once proposed to a SpiceJet air hostess over Twitter, and some customers have referred to Samuk as "sweet". Others have sent her poetry. "At times, people get so possessive about a brand they come to the brand's defence when someone else criticises it," she adds.

The direct communication that Facebook and Twitter make possible is slowly changing the way brands relate to consumers, particularly young, tech-savvy ones. "In an era of greater transparency and authenticity, we will see social media gradually delivering a new standard of interaction," says Alva.

The people managing social media will be at the forefront of the shift. How do they stay ahead of the curve? By being avid consumers of social media themselves. The first thing Samuk does when she gets home is check out her own Facebook account. Despite answering queries and braving retorts throughout the day, nothing can stop her from getting back into the virtual world. She maintains she can never have enough of it.