Intel's idea behind Ultrabooks was to provide a device which is as convenient to carry around as a tablet while being able to do much more.

Nandagopal Rajan
They are getting thinner and thinner, and lighter and lighter. The Toshiba Portege Z830, the thinnest and lightest of them all so far, is just 0.63 inches thick and weighs 1.12 kg. But thin does not mean low on power. Ultrabooks, as these size zero laptops are called, run on Intel's second generation Core processors. Soon there will be a new set of them running on Intel's still more powerful third generation Ivy Bridge processors.

The way ultrabooks have been marketed, however, their power is secondary: it is size that matters. Faced with declining laptop sales, Intel's idea was to provide a device which is as convenient to carry around as a tablet while being able to do much more, especially of the creative stuff. The look, the weight, the thickness were pivotal to take on the tablet. A laptop weighing over two kg just would not work. It had to be less than 0.8 inches thick and weigh under 1.5 kg. 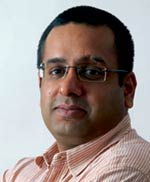 Nandagopal Rajan
But then how is the ultrabook any different from Apple's MacBook Air, launched in 2008? The Air too is ultra-thin and feather light, and can still do a lot of heavy duty stuff. There is also Sony's X series of laptops started soon after, the lightest of which weighs 655 grams and is a little over half an inch thick. Both these devices, like the ultrabooks, also run on Intel processors. So ultrabooks are really not all that different, and Intel's idea seems to have been to inspire companies apart from Apple and Sony to move in the same direction, using the ultrabook label to push sales.

So is the ultrabook just a gimmick? Had the Intel standard as to what constitutes an ultrabook been limited to specifying only its size, making it an overpriced netbook, it would have been. But Intel has set other norms as well relating to price, extended battery life, better security features and more (see www.businesstoday.in/ultrabooks for the specifications), all aimed at improving user experience. The Air - which looks slimmer than the slimmest ultrabook - may still tick most of the boxes, but netbooks and Sony's X series hardly match up.

Thus ultrabooks are a viable option for those who do not want to take the Mac plunge. Intel has given the industry a standard for sleek Windows-based devices. If you are tired of dragging around a heavy laptop, the ultrabook is just the device for you. Let there be no doubt: the portability is what you are paying (extra) for.

Much of the extra weight comes from stuff you will never use. Most of us may not be able to remember the last time we ran a DVD on our notebooks. So why not do away with the optical drive and lighten the device by around 300 grams? That is what the ultrabook does. It also shifts from a hard disk drive to the solid state drives which cuts another few hundred grams. You do not really need that 500 GB hard drive in a laptop.

Manufacturers have, however, found it tough to stick to Intel's $1,000 price tag for ultrabooks. So prices are now all over the place - the upper end close to $3,000. Those who have stuck to the price have had to make compromises elsewhere.

HP, meanwhile, has found a simple way around this predicament: it has dropped the Intel tag. The $699 HP sleekbook sticks to the ultrabook spec sheet, except that it does not have an Intel processor and will run on the 'cheaper' Advanced Micro Devices (AMD) chips. It is like saying: "Thanks for the idea, but we will do it without you." Tech gurus are already looking for a new term for these non-Intel devices. Whatever the name, this new category will hold promise.