A number of industries have started using 3D printing to make goods. Makers of 3D printers expect the trickle to soon turn into a flood

Athmika was born with a rare condition. She did not have a sternum (breast bone), which protects the heart, major blood vessels and lungs. She had to be operated upon but it was not an easy surgery. The team of doctors at Amrita Institute of Medical Sciences, Kochi, took a 3D CT scan and developed a simulated 3D model of her chest wall to practise the procedure several times before fixing a 3D-printed titanium implant in her chest.

Welcome to the brave new world of additive manufacturing, popularly known as 3D printing - the making of three-dimensional objects from a digital file. The process involves building an object by laying down successive layers of raw material. Each layer can be seen as a thinly sliced horizontal cross-section of the eventual object. It is the opposite of subtractive manufacturing, which involves cutting out/hollowing out of a piece of metal or plastic.

The technology, which took its first steps over three decades ago, is now catching on in India, where companies ranging from Tata Motors and JSW Steel to GE Transportation and tens of start-ups, apart from organisations such as ISRO, are reaping its benefits in the form of higher precision and lower costs. Even the fashion industry is using 3-D printing to give its exclusive clientale a customised experience. And to cater to such high demand, players such as HP, Wipro3D and Siemens Digital Industries Software are offering a suite of solutions. While the early adoption of this technology was restricted to visualising and prototyping, it has now moved on to the realm of hi-tech and precision manufacturing.

"In India, the market size for 3D printing is about Rs 3,000 crore (including players who provide 3D printing solutions and services - prototyping, product manufacturing and services.) The market is growing by 40-50 per cent a year," says Vinay Awasthi, Managing Director, HP Inc., India, Bangladesh and Sri Lanka. Global market research and consulting firm 6Wresearch says India's 3D printer market is projected to touch $79 million (Rs 553 crore) by 2021 on the back of higher domestic production, fall in cost of manufacturing, increasing use across applications and the Make-in-India campaign. The 2019 Wohlers Report has forecast $15.8 billion market for 3D printing products and services worldwide by 2020. This is expected to grow to $35.6 billion in 2024. India clearly has a lot of catching up to do in spite of the fact that 3D printing has opened doors for leapfrogging in the manufacturing sector, especially in high value/low volume products.

"From the design perspective, 3D printing changes the innovation paradigm. By freeing designers from constraints that traditional manufacturing imposes - essentially allowing any shape to be printed - it brings automated optimisation to the forefront of the design process. In effect, engineering is tipped on its head; instead of the designer being responsible for defining the form of the part, with the simulationist evaluating the function, additive manufacturing lets the designer define a part's function, while the software figures out the form. This is the beginning of an age of autonomous innovation," says Zvi Feuer, Senior Vice President, Manufacturing Engineering Software, Siemens Digital Industries Software. He should know. For Siemens has made 3D-printed oil sealing rings for JSW Steel that are used to keep oil separated from steam inside industrial steam turbines. The rings have been installed on steam turbines operating at the JSW plant in Salem, Tamil Nadu.

JSW is not alone. In India, a host of sectors ranging from automotive, aerospace, healthcare and defence to consumer goods, apparel & fashion and construction are tapping the power of 3D printing technology.

For instance, GE Transportation is using 3D printing at its John F. Welch Technology Centre, Bangalore, to design parts for mining vehicles and locomotives. A couple of years ago, ISRO's GSAT-19 satellite carried a component called a feed cluster made by Wipro 3D. Bangalore-based 3D printing service bureau Accreate Labs will produce 3D-printed parts for ISRO's Geosynchronous Satellite Launch Vehicle or GSLV. Tata Motors has been using 3D printing for research and development (R&D) and prototype testing at its facility in Pune. In March 2017, it showcased a concept sports car at the Geneva International Motor Show, using 3D printing to create replicas of the model. It started incorporating 3D printing in design and engineering prototyping around 2010. Over the years, it adopted it in the R&D set-up for manufacturing parts and testing/validation of engineering and design processes.

Pratap Bose, Vice President, Global Design, Tata Motors, says with recent advancements in material technology and cost optimisation around both materials and equipment, the company is designing select vehicle parts through 3D printing. "This includes accessories and merchandise which accompany our vehicles. 3D printing lets us make iterations faster and allows our team to come up with multiple design alternatives," he says.

Some big names that offer 3D printers include HP, Stratasys, Wipro-3D, think3D and Divide by Zero. The printers, depending upon the technology and material used, cost anywhere between Rs 15,000 and a few crores. HP's industrial printers start at Rs 1.5 crore. Its Jet Fusion 4200 printer, which includes both pre- and post-processing units with 3-year maintenance and service contract, costs Rs 2.5 crore. On the other hand, Divide by Zero's industrial printers are priced around Rs 20 lakh. The desktop printers for hobbyists, individuals and educational/research institutes range from Rs 15,000 to a few lakhs.

Healthcare is one industry where 3D printing is being used on a large scale. Implants and prosthetics usually come in standard sizes and do not fit perfectly. 3D-printed customised implants created with the help of scans are likely to give better results. Similarly, 3D printing is turning out to be a boon for the dental industry, which is using patient scans to make things such as crowns for teeth and Invisalign aligners (alternatives to metal braces) that are a perfect fit for the patients.

Artificial Limbs Manufacturing Corporation of India (ALIMCO), a government of India enterprise, too, is betting big on 3D printing to lower costs. "ALIMCO plans to introduce 3D-printed limbs within the next four-five years at its new factory that will be set up in Faridabad. The idea is to serve maximum people in minimum time while continuing to be cost effective," says Rajesh Kumar Das, Prosthetics and Orthotics Officer, ALIMCO, which started making artificial aids in 1976. ALIMCO is not alone. In medicine, 3D printing is being used to manufacture implants, prosthetics and orthopaedic casts. The cost of such customisation is not prohibitive either. A 3D-printed hand cast costs around Rs 350, similar to the price of a traditional hand cast.

The space has attracted a number of global players. HP, for instance, has helped build a 3D manufacturing facility in the Andhra Pradesh Medtech Zone. It mainly caters to the 100-plus healthcare companies in the zone.

That's not all. "The radiology space is adopting 3D printing enthusiastically for better understanding of imaging. A 3D-printed model removes any confusion the doctors may have regarding the case in front of them. Healthcare is predominantly using 3D printing for better evaluating an organ or a bone and for training purposes," says Vinil Menon, CTO, CitiusTech, a healthcare IT company.

Fashion - Customisation is the Key

3D printing is helping the fashion industry give customers a customised experience. Some time ago, global sneaker brand Adidas launched Futurecraft 4D customised shoes made using a software programme. An Indian start-up, Shapecrunch, has been making 3D-printed insoles - using images of the feet - that it says can treat foot pain.

Earlier this year, actress Deepika Padukone wore a gown by fashion designer Zac Posen that had hundreds of 3D-printed embellishments. "The new-age consumer is demanding customisation in every product. For instance, Royal Enfield is offering customised bike accessories, shapes and colour by collaborating with local makers of customised bikes," says Sansare.

For decades, 3D printing has been synonymous with plastic moulds and prototypes. Now, it is also being extended to industrial use, which includes metal fabrication and finishing for industries such as aeronautical, aerospace, defence and automotive. Metal 3D-printed parts, say companies, can improve performance of components, optimise weight and achieve complex geometries while innovating design. This can significantly shorten the time required to design and launch in the market. That is why 3D printing is being used in defence for critical projects to build missiles, fighter jets, handheld weapons, drones, respiratory gear, and much more. 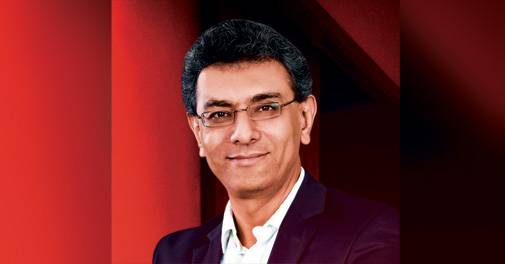 The domestic 3D-printing market is primarily driven by start-ups such as Ethereal Machines, 3Dexter and Aha3D Innovations, among others. A total of 124 3D printing ventures have been launched in the country till date; 66 were launched in 2015 and 2016.

"We expect 3D printing to be most widely adopted in production of high-performance engine components (such as turbochargers), metal structural body and chassis parts (such as steering knuckles) and decorative elements composed of polymers (such as emblems)," says Awasthi of HP. Start-ups and small and medium enterprises will be the key drivers of innovation in 3D printing. "This technology can help them turn their unique designs into reality. With superior engineering capabilities, start-ups and SMBs can make India a design hub," he adds.

Contrary to common belief that 3D printing is expensive, the technology, say experts, can help manufacturers cut cost by reducing the usage of raw material and design improvements. OEMs, for instance, can eliminate warehousing costs and instead print parts from digital files. "Also, it can be a cheaper alternative for tooling fixtures. Several companies we work with, such as Piper Aircraft, 3D-print small tooling fixtures and thus eliminate the cost of storage," says Feuer.

"3D printing allows people to produce just one part. It also helps eliminate investment in tools and moulds. For example, GE manufactures fuel nozzles using 3D printing. These cost more but will help GE save fuel and other costs in the long run," says Tanmay Shah, Head, Innovations and Retail, Imaginarium India. The Mumbai-based company acts as a service bureau that helps clients choose 3D printers, materials and software for their applications. It even prints parts for them. 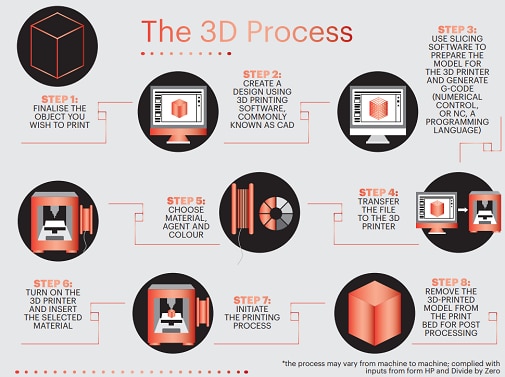 The biggest challenge is the nascent ecosystem. "There are multiple barriers to wider adoption of 3D printing in India. These include high equipment costs, limited availability of material, shortage of talent pool, longer production timelines and absence of formal standards and strong IP safeguards", says Mahesh Makhija, Partner and Leader, Digital and Emerging Tech, EY India.

Another is that traditional manufacturing is well defined and there is a well-recorded network of suppliers, says Bhavesh Kumar, Brand Leader, SIMULIA, Dassault Systemes. "There is no good way of connect the demand with manufacturers." Dassault Systemes is tackling this through its marketplace that provides on-demand manufacturing. It is like a e-commerce site where one can place an order and get the product delivered. This marketplace has over 180 vendors who do 3D printing.

In spite of the challenges, Indian companies will in all likelihood embrace 3-D printing in earnest and make it essential to manufacturing.