GVK is trying to retain its hold on its crown jewel, the Mumbai International Airport, even as the Adani Group eyes a stake in it. The battle has just begun. 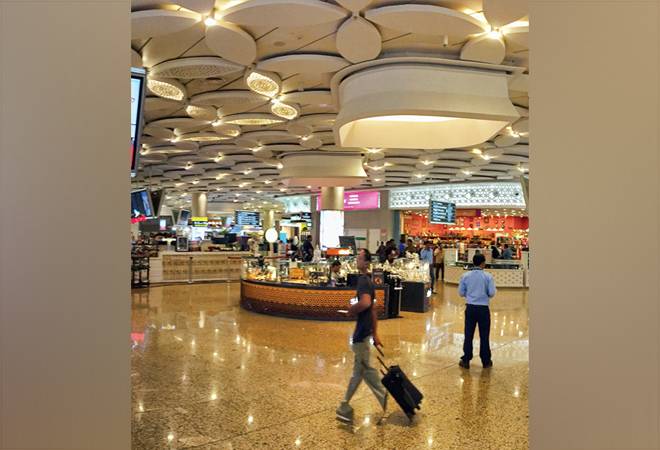 GVK and Adani are both big names in infrastructure. Both symbolise entrepreneurship spawned by the post-1991 economic liberalisation. Yet, both are distinctly different. One broke the mould as developer of the Mumbai International Airport, and turned it into one of the best in the world but is cash-strapped now and has been forced to restrain any expansion. The other is also deep in debt and although new to the airport business, is driven by an unmistakable ambition to make it big in the business. Other than a big-bang entry early this year into this space by winning bids to operate six airports, the Adani Group also seems keen to have a say in the running of the Mumbai International Airport (MIAL) in which GVK has a 50.5 per cent stake.

The Adani Group has been in the news for its private offer to South Africa's Bidvest Group, which holds a 13.5 per cent stake and a board seat in MIAL, and is seeking to buy Bidvest's stake at Rs 77 per share for around Rs 1,200 crore. But GVK is fighting tooth and nail - after all, the airport business revenue of around Rs 3,700 crore, largely from this airport, accounts for nearly 90 per cent revenue of its listed entity, GVK Power & Infrastructure. The group has moved court for exercising its right of first refusal for the Bidvest stake and is arranging funds to back its offer.

Adani's move comes on the back of it emerging as the successful bidder early this year for upgrading and operating six airports - Ahmedabad, Lucknow, Jaipur, Guwahati, Mangalore and Thiruvananthapuram. Sources say the group is keen to become the largest player in the country. Mumbai is an important pit stop in this journey.

The Adani Group's spokesperson refused to comment on the offer to Bidvest and the group's plans for the Mumbai airport.

What is the attraction of the Mumbai airport? First is the volumes - 48.5 million passengers in 2017/18. This is more than the total passengers at all the six airports that Adani bid for last year. India's current total capacity is 317 million. CAPA estimates that India will require a $36-45 billion investment in around 55 airports by 2030 to create an additional 500-600 million capacity. It is this growth that Adani is betting on.

Another major attraction of the Mumbai airport is its 60-year concession period and regulated tariff structure. MIAL, which runs the airport, is on the path to profitability and is seeing good growth in both non-aero and cargo businesses. It reported a profit of Rs 35.4 crore in 2017/18 compared to a loss of Rs 89.7 crore in the previous year. Gross sales rose from Rs 3,025 crore to Rs 3,342 crore during the period, according to Ace Equity data. 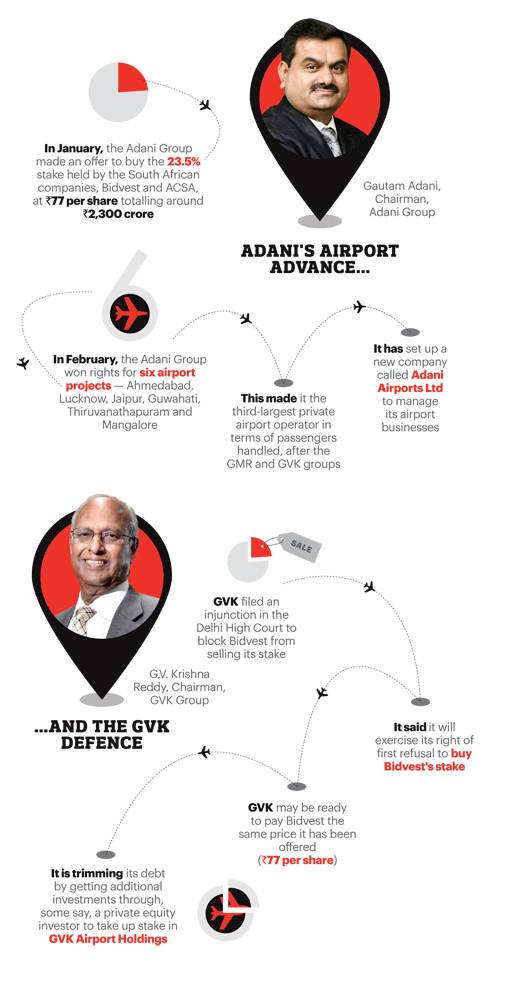 But why go after a minority stake? That too when the company has not even started paying dividends? Experts say that even this much ownership will give the Adani Group a board seat and a stake in the Navi Mumbai airport, a 100 per cent subsidiary of MIAL. The group could also gain from the experience of operating a leading airport, and would be able to hire talent from here for other airports.

Adani Group's focus on the Mumbai airport has also perhaps got to do with the financial health of GVK, whose assets are stretched. In power alone, its debt is around Rs 12,000 crore (out of the total group-level debt of Rs 24,000 crore). The Mumbai airport is GVK's best bet to generate cash.

To retain its hold on the airport, sources say, GVK is willing to pay Bidvest the same price it has been offered (Rs 77 per share) by Adani but needs time. In February, it informed stock exchanges that GVK Airport Holdings Ltd, a step-down subsidiary of GVK Power & Infrastructure, has the right of first refusal to acquire 162 million equity shares of MIAL, constituting 13.5 per cent paid-up capital, from Bidvest at Rs 77 per share and subsequently raise the shareholding of the GVK Group from 50.5 per cent to 64 per cent. GVK has sought time till the end of September this year.

The company approached the Delhi High Court for a full bench hearing after a single-judge bench dismissed its plea to stop Bidvest from selling to a third party. BT has learnt that the court has asked GVK and Bidvest to settle the matter through arbitration.

GVK is working hard to look at ways to prune debt and raise money. One of the options being considered is asking a private equity investor to take up a substantial stake in the airport holding company. Sources say the group is in talks with a financial investor. Names doing the rounds are ADIA (Abu Dhabi Investment Authority), NIIF (India's National Investment and Infrastructure Fund), and leading Canadian pension fund PSP. Much will depend on the details of the deal and the quantum of the investment.

With little to fall back upon in terms of revenue from power, the GVK Group has also been working to get its stalled power projects restarted. The Goindwal Sahib thermal power project - the Rs 5,000 crore project that it took up in April 2016 and which faced challenges due to lack of coal availability - started operating at full capacity from December 2018. The group has set up a team of nearly 25 people to ensure uninterrupted supply of good quality coal to the project. It had stopped bidding for new projects after Goindwal Sahib and took up the Navi Mumbai airport project only recently. The other stalled venture, the Alaknanda hydro power project, is said to be operating at about 55 per cent capacity. Other than these, GVK has several gas-based power projects, which are constrained by lack of gas availability. Sources told BT that from the second quarter of 2020, Reliance Industries and ONGC are likely to supply gas and GVK intends for bid for these then.

Adani Group, too, is stretched. It already has around Rs 1.26 lakh crore consolidated debt and will need more as it ventures into new areas of business like airports, domestic gas distribution, power transmission, solar/wind power, apart from pursuing coal mining in Australia, a space that others, including GVK, are seeking to exit as coal prices dip. While it won rights for six airports last year, those in the industry say it bid at such low levels that it will take some years for the projects to start reporting positive EBITDA.

In another development, just four months after joining the group's newly formed airport business, its CEO, Sidharath Kapur, resigned. Kapur had joined in the second half of April.

However, sources say the Adani Group is confident of things improving in the power sector with the Supreme Court directing the Central Electricity Regulatory Commission to listen to Adani Power's plea and allowing it fuel cost pass-through for the Mundra power project that had turned unprofitable due to rise in prices of imported coal. The group expects more cash to come in from the power business. Its defence business has also started picking up with projects like the one involving sale of drones (unmanned aerial vehicles) to Israel. That apart, it is moving ahead with its Australia plans and has started construction in Australian coal mines after receiving clearances from the Australian government.

To what extent airports give the Adani Group the next growth push and how GVK tries to stay the course remain to be seen.

Plugging Into The Future